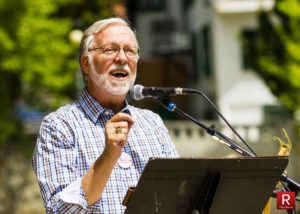 By Bob Conrad and Don Dike-Anukam

Local county assessor candidate Chip Evans, who is in a highly contentious race against incumbent Mike Clark, is being targeted online by trolls.

A Facebook account by the name of Jack Shimpton alleges that Evans was a member of a “neo nazi group.”

Evans was a member of Facebook groups that suddenly changed their names to things like “National Teachers Strike For Extermination of All Jewish Invaders.” Commenters then alleged he was supporting the groups’ agendas.

“The group’s originator (whom we believe is a fake person posing as a UNR student) says in the group’s timeline that she saw the accusations about Chip online and chose to start the group because of those accusations, and those original accusations were made by the hackers,” said Evans campaign staffer Melissa Kitrley.

Evans said he’s continuing to report the accounts and associated activities to the Reno Police Department, the FBI, and, of course, the social networks. The attacks, he said, are ongoing.

He called the fake accounts bots. The Concern Citizens group has only eight members and claims Evans supports hate groups.

Evans is a well-known progressive Democrat in the Reno area.

Evans said he was not accusing his opponent, Clark, of anything, but alleged that some of his supporters seem to be aware of the attacks.

“Previously, someone associated with Clark’s campaign went on a radio show and said they were going to launch a website disclosing all the bad things about Chip Evans,” Kitrley said. 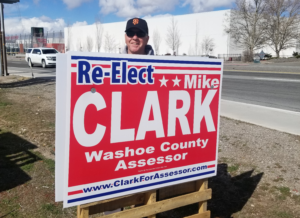 lark denied any association with the cyber attacks.

“I wouldn’t even know how to hack someone’s computer, and I don’t know how,” he said. “Even if I knew how I wouldn’t do it. Because I would too be afraid I would get caught doing something stupid that might embarrass me and my family. And I don’t need to hack somebody to win. But I do want some real questions answered about Mr. Evans and the 31 people’s whose money he lost and maybe they should be questioned if they did it.”

Clark’s been campaigning against Evans and criticizing him for going by “Chip” rather than Hugh Dudley, his real name, on the ballot. He’s also criticized Evans’ business bankruptcy.

“Hugh Dudley ‘Chip’ Evans, Jr. was the beneficiary of $10.8 million bankruptcy settlement in 2012 that allowed him to shirk the responsibility of re-paying $1.4 million to 31 private investors in his real estate company; a company that had no licensing or certification for the types of investments he offered,” Clark wrote in an op-ed to ThisisReno.

Assessor Clark found to have violated county policies for sending...

On Transparency and Bankruptcy (OPINION)