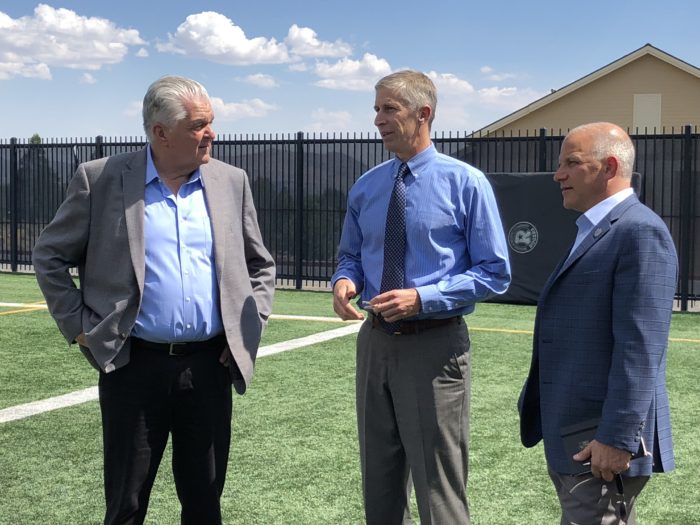 The Oakland Raiders are considering Reno as its summer home and were in town Thursday to tour the Nevada Wolf Pack facilities, as well as the athletic compounds at Hug and Wooster high schools.

If selected, Reno would begin hosting the team in summer 2021. The Raiders’ summer training home has been in Napa 23 years but the team is planning a permanent move to Las Vegas for the 2020-21 season. 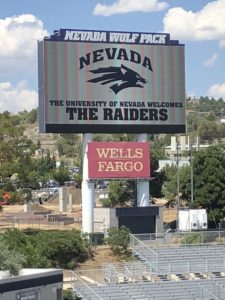 Raiders President Marc Badain said it’s important the team be embraced statewide. He thanked the community for the tour and noted Wolf Pack staff visited the team site in Napa to see what might have to be replicated.

When selecting a summer home, a number of questions have to be answered and the priority will be the football team, Badain said.

“Is the environment conductive to the coaches and players coming together to get ready for the upcoming season?” Badain said. “So everything will be about finding the optimal location for the team.”

University president Marc Johnson said having the Raiders on campus would add excitement, although there hasn’t been talk about practice schedule logistics or financial arrangements. The Wolf Pack football team begins practice about Aug. 1 and the Raiders would need to use the facilities until the middle of August.

“The Raiders were able to see the facilities and ask a lot of questions about housing, about practice fields, about weight rooms, and dining facilities and the like,” Johnson said. “So they’re gathering information. This may be a possibility. It’s very early in the discussion.”

Wooster principal Leah Keusher said the Raiders practicing at her school would bring the campus a sense of pride.

“It would be exciting for our kids to have a pro team potentially at one of our school sites,” said Keusher, a longtime Raiders fan who was sporting team regalia. “I think it’ll be great for whichever school they pick. It’ll mean a lot.”

Mike Kazmierski, president and CEO of the Economic Development Authority of Western Nevada, said a summer training camp locally has advantages and will help the region to prosper.

“We’re also close to Northern California and many die-hard Raider fans will likely visit our community during the training season,” Kazmierski said. “Maybe they’ll like it so much they’ll move their companies here.”

“You could not ask for a better partner than what we have with the Raiders,” said Sisolak, the Democratic nominee for governor. “They’re committed to the community and with the Silver State—we want to make it the silver and black state, because the Raiders are such an important part of what we have here.”