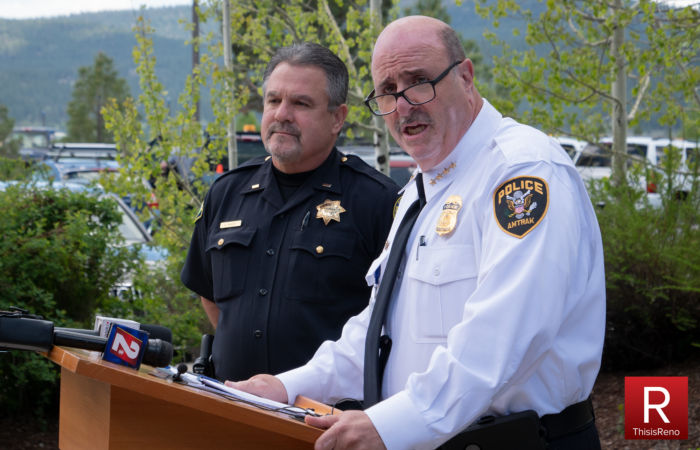 TRUCKEE, Calif. — Amtrak’s Chief of Police Neil Trugman today said that Aaron Salazar may have tried to commit suicide by jumping from an Amtrak train four miles east of downtown Truckee on Tuesday, May 15 2018.

A Union Pacific railroad track foreman is reported to have seen an open window on the train prior to it arriving in Truckee, Trugman said. He repeatedly described Salazar as “distraught” and experiencing “life issues.”

“He had several conversations with passengers and crew while aboard that train,” Trugman said.

The Chief claimed that over the past week Amtrak investigators spoke with 300 people as part of the investigation, including Salazar’s friends.

“He [Salazar] shared with them a number of life concerns he was having,” Trugman said. “A fall from a moving train would cause significant injury. There is no physical evidence or witnesses statements to (indicate) a physical altercation occurring on the train. There’s nothing to suggest he involuntarily was removed from that train.”

“He was very distraught,” Trugman repeated. “All indications right now appear that it was an attempted suicide.”

“Someone who is suicidal does not constantly talk about their future. Aaron had big plans to graduate from Portland State with his degree in Economics and continue his education through graduate school in Denver,” said Morgan Patterson, a friend of his from Portland State University. “He always talked about wanting to be a politician and to be involved in the government. He wanted to be able to make decisions and change the world.

“Not once did Aaron display any type of behavior that makes me feel like he would want to take his own life. He has so much to live for and has such a close bond with his family and friends. We would know if Aaron needed help.”

Late Tuesday evening, Salazar’s parents emailed a statement to ThisIsReno and the Los Angeles Blade in response to Amtrak Police Chief Trugman’s characterization of their son and his case:

“As Aaron’s father and mother, we are releasing our official first public statement on what has happened with our son. We have many problems with Amtrak’s press conference today. First and foremost, Amtrak is a for-profit company that is currently investigating its own case to prevent any liability.

“From the very start, they ruled this case an attempted suicide. Their investigators gave us misleading information, including telling us that they had a witness who saw Aaron jump out a window on the train.

“When we fact-checked their claim and confronted the detective, he simply backpedaled his statement. Amtrak’s investigators only investigated the case as an attempt at suicide.

“Second, regarding the Amtrak chief of police’s statement: His claims about Aaron’s injuries falling from a train are not consistent with what anyone who has seen Aaron can attest to. For one, those burns that were supposedly from jumping out of a train are not consistent with the facts because Aaron’s jeans were not damaged and his injuries themselves do not match jumping out of a train.

“We are also surprised by this false theory because they have never had medical experts examine his body to determine the cause of his injuries. Their form of investigation has been little more than a smear campaign to sweep Aaron’s story under the rug like Robin Putnam’s case a few years ago.”

Reporting by Bob Conrad | ThisIsReno with additional reporting from the staff of the LA Blade.

A burger for everyone

Aaron Salazar: “I Did Not Jump From The Train” (Watch...

Savor and Sip While Supporting Truckee Tahoe School of Music