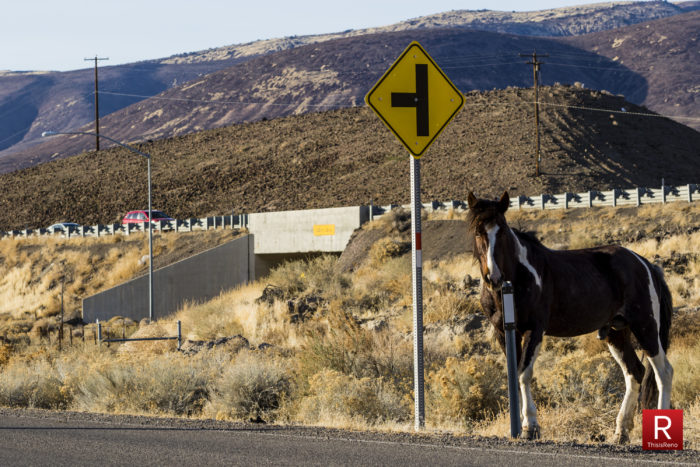 Mustang on a road near USA Parkway. Image by Ty O’Neil.

The Nevada Department of Agriculture today announced that its request for proposals for a group to manage the nearly 3,000 Virginia Range feral-estray horses received no replies.

“The Nevada Department of Agriculture (NDA) did not receive any proposals for the transfer of ownership of the 2,951 feral/estray horses located in the Virginia Range,” NDA Director Jim Barbee said. “Because no proposals were received, we will not be holding a public opening as scheduled in the timeline of the request for proposals.”

Barbee said that the department will go back to its board of agriculture for further direction.

“We will continue to manage the … horses for public safety,” he added.

The Hidden Valley Wild Horse Protection Fund requested that the state board of agriculture reconsider the request and called the transfer of horse ownership a violation of state law.

“The community has made clear they want the horses to remain a cherished part of Nevada,” said the fund’s president, Shannon Windle. “There are local advocates who envision a better future of local management of the Virginia Range hoses to benefit both the horses and (NDA).”