Home > Featured > From the Right: The Rebirth of the Washoe County Republicans (Opinion)
Featured

From the Right: The Rebirth of the Washoe County Republicans (Opinion) 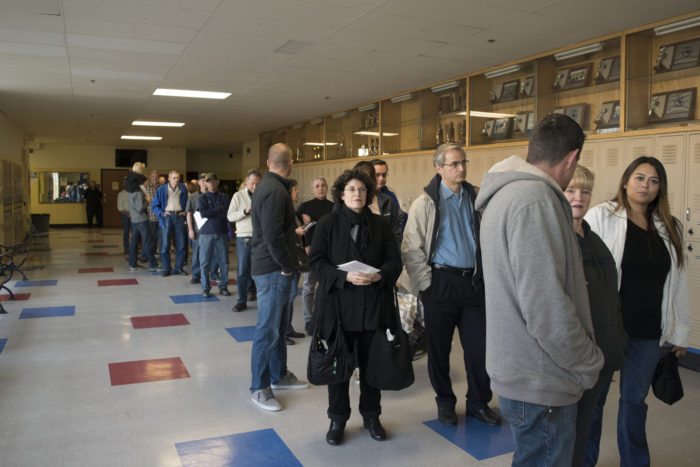 Voters wait in line before participating in the Nevada Republican Caucus at Reno High School on Feb. 23, 2016. Photo by Jose Olivares.

Two years ago at this time, the Washoe County Republican Party was in the midst of a very public and messy civil war that consumed all and kept no prisoners.

It was an ugly, ugly, personal-attack-driven, embarrassing event. While this reality show played out, that I sadly had a front-row seat to, it only grew in intensity and vitriol.

The year progressed as the election became closer and closer, and the focus on that goal seemed to drift further and further away. The party found itself engrossed in more internal fights over varying personalities than public fights over policy. 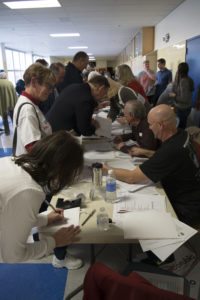 That culminated in the snap resignations of the entire executive leadership of the party in March 2016. Despite a record-setting caucus in February that would have and should have been a time of celebration for all in the organization, it was instead another missed opportunity for the Washoe County Republican Party in 2016 to galvanize and engage new members and supporters.

For me this was one of the darker episodes (personally and politically) in the awful year of events that was 2016.

In April 2016 the embarrassment parade continued further with a physical fight on the floor of the meeting during voting that ended the meeting early.

Also, a lawsuit being filed against the party executive leadership threatened the county party organization’s very existence or ability to operate. This was how the beginning of 2016 started and continued for the Washoe County Republican Party.

Then in November 2016, the much anticipated and important presidential election happened.

Not surprisingly — considering the circumstances and the unified Washoe/Nevada State Democratic party’s efforts and resources — Washoe County voted for Hillary Clinton and the Democrats. The coattails and its effects pour all the way down the ballot.

The Washoe County Republican Party infighting and baggage was so distracting that other campaigns, and the actual main effort to elect the Republican team in that election, moved across town; although, space concerns were cited as the basis for moving these operations. This left the organization to fend for itself, isolated from and marginalized by political players and events in that cycle.

Later on after the election, in the aftermath of the near sweep in Washoe County in key races that Republicans had a reasonable shot to win (multiple local races, city council races, and two to three State Assembly races) and at the top of the ticket of former U.S. Congressman Joe Heck.

A small cadre of activists, former public figures, state party activists, and concerned members of the county committee came together and made a plan. Part of that plan was to figure out what happened, what to do about it, and more importantly, how to rebuild the Washoe County Republican Party.

As the party limped along quietly through the winter of 2016 and spring 2017, under a caretaker leadership, new elections for leadership were announced.

In April of 2017, the team presented their plan in candidate town halls to rebuild, plan for rebirth, and to Make Washoe County Red again.

At that time I had the benefit and luck to sit in on some of those town halls, and I was, well, amazed. Because it looked and sounded to me like something I haven’t seen in a long time in Washoe County — a chance at victory!

As the leadership campaign made its way through the town halls, and then to the important election day with the Central Committee, the new team won its place with an overwhelming majority. One could interpret their victory as a resounding mandate to the team to “Make Washoe County Red Again,” and put their plan right into action from a Central Committee hungry for change, competency, and organization.

The victory successfully placed into office new chairman Michael Kadenacy, new/previously first vice-chairman Michael Jack, new/previously served secretary Phyllis Westrup, and treasurer Patty Miller. From that day on they went to work, knowing the task at hand was a tough one. Thus, they started to renew and rebuild strained relationships between community stakeholders, officeholders, interest groups, donors, and more importantly, committee members and the public.

Their task has not been easy: to chip away at the bad public relations issues, turned off committee members, and a multitude of problems that the party faced that were left from the troubles, struggles, and elections from past conflicts.

Yet they chipped away at it. The South Virginia Street office, for example, transformed from a messy sprawl of open space and disorganization to a professional and respectable setting to house the new team and volunteers.

Slowly but surely from the ashes rose the Washoe Republican Party, which showed that, like its party emblem the mighty elephant, it is just as tough and resilient. Still months away from election day, there is much more work to do.

So here we are today in February, and this team, organization, and party has made some major strides and changes that I never thought it would make in such a short amount of time.

At my last attendance of the Central Committee meeting, there was an air of hope that Washoe County can become red again. I watched the briefing and the updates from the members and leadership team, who took on what could easily be described as a party on life support in the spring of 2017.

I see the beginnings of something that I haven’t seen in a long time: relevancy for this party and organization in the affairs of Washoe County and maybe Nevada as a whole.

Under the leadership of newly-elected chairman Kadenacy, first vice-chairman Jack, secretary Westrup and treasurer Miller, there has been a tremendous reversal of fortune. In addition, it’s this organization’s volunteers and supporters who give their free time and energy who are the real heroes and stars of this rebirth.

So I end this story — for them, it’s only beginning — with a point that this is an organization that’s ready for business, and I wish to encourage those who in the past have been turned off to tune in. Those not wanting to get involved, or who have been dismayed or turned off by what happened in recent past, please come on back.

The lights are back on again, and the future is brighter than it’s ever been — so much so that the headline speaker of the Lincoln Day dinner is the conservative rock star author, filmmaker, and commentator Dinesh Dsouza. It has become one of the hottest tickets in northern Nevada political circles, and it is almost sold out.

From The Right: Making Washoe County Red with Taton Thompson...