Home > Featured > From The Right: A Busy Republican Week in Reno (Opinion)(Updated)
Featured 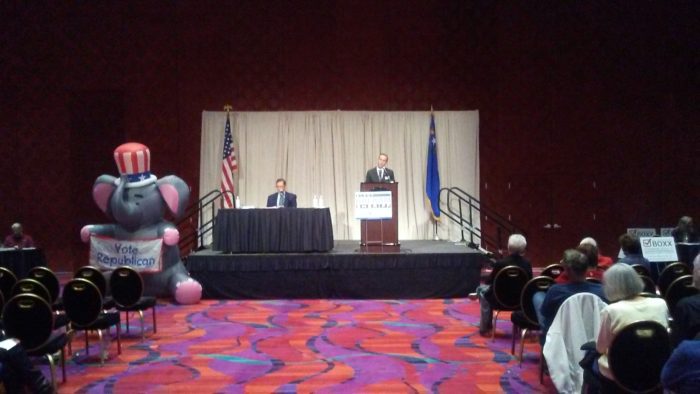 The week of April 9, 2018 was a fairly busy one for Reno area Republicans. On Thursday, April 12 I went to the heavily-attended Republican Candidate Forum hosted by the Republican Women of Northern Nevada Political Action Committee (RWNN PAC) at the Peppermill Hotel and Casino. Most Republican candidates or representatives on the ballot for state offices gave two to three minute speeches about themselves and their campaigns.

As I walked around talking to candidates, spectators, consultants, power players, activists, and fellow political geeks I could sense excitement and optimism for this election cycle. There appears to a number of motivated, experienced candidates. The fire burning in the bellies of conservatives is fueled by issues that appeal to many in this audience, including repealing the Commerce Tax and regaining control of the Nevada Senate.

I want to commend the RWNN PAC for their great event. It had it all: politics, suspense, excitement, and food.

Three days later, on April 15, I attended the opening of Adam Laxalt’s new Reno campaign office for his gubernatorial bid. The room was filled to the brim with supporters, politicians, public figures, and of course, some of the Laxalt family. The mood was jubilant, the pizza was plenty, and there was candy for parents and kids alike. Some of people that came to the event got right to work, hitting the streets, making phone calls, or both. Participants at the opening could write their names on the wall as part of the festivities, which I did as well. 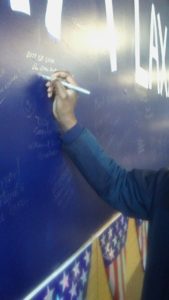 Nevada Republican Party (NVGOP) helped to organize and participated in the Republican National Committee’s National Day of Action, a first-of-its-kind event that’s the party’s first big push for the 2018 election cycle. This effort in Reno was directed locally by the NVGOP, the Washoe County Republican Party, and Team Dean, Sen. Heller’s campaign. NVGOP Chairman Michael J. McDonald made a statement about the effort:

“Today, activists across Nevada joined in a nationwide effort to train thousands of volunteers, collect petition signatures, knock doors, and make phone calls for National Day of Action 2018. The momentum we saw in the field all day shows strong support for the Republican agenda. With our party more organized than ever before, we’re fired up and ready to defy history in the 2018 midterms.”

This is where I was engaged this weekend, not as a writer or student, but as a citizen. Given the prior week in review and events that I watched and participated in I’m feeling more and more confident that the outcome in November in Nevada will be in our favor.

Another update for the week: As of Thursday, April 12 Taton Thompson, who was profiled March 26 in the From The Right column, resigned his position with the Washoe County Republican Party. His resignation was effective immediately and for reasons unknown at this time.

Lastly, I respect Wisconsin Congressman Paul Ryan’s decision to not run for reelection this week and as Speaker of the House in 2018. Thank you for your service and good luck, although I think history may judge your speakership in a mixed light.

Update: This article has been updated to include additional candidates at the RWNN PAC forum and to note that the National Day of Action was also coordinated by the Republican National Committee.

The indispensable role played by fake electors in a real...