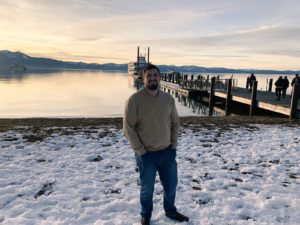 This week I’d like to do something different. I know lately I’ve been interviewing and talking about people on the ballot. This week I want to talk to the people who were helping those on the ballot win their races. This is the story of one of those people in Washoe County: Mr. Taton Thompson, Director of Operations for the Washoe County Republican Party.

I had a chance to talk with Thompson about what he does for the Washoe County Republican Party, how he does it, and what his plans for the landscape of 2018 look like so far. My goal in this is to illuminate how politics and political work is really done, because I think that there is a misconception about this in today’s public sphere.

Thompson kicked off our chat discussing his role in this election effort. “My job is to set and implement the strategy of the grassroots game while also mobilizing volunteers and making sure they are trained and confident reaching out to voters,” Thompson said. “I’m also responsible for setting our outreach in the community and set up our attendance at events.”

Tell me who is Mr. Taton Thompson?

“Well, I’m 28. I grew up in rural South Georgia. Son of a navy veteran. First generation college student. Attended Valdosta State University for political science and public administration. I’ve always had a had a thing for politics; as every morning when I would wake up for school my mother would have the news on. Therefore, political science was a no-brainer for me. I’ve worked in some capacity on over 30 campaigns and this is my sixth cycle in politics. I was in Georgia and heard about the job and I received it on the spot, and quit my job in Georgia the next day. I had never been west of Louisiana or Illinois but, in less than two weeks I had started the trip to make a permanent move to Reno.”

“Always worked in politics but never had a cycle where I was able to make a national difference at the statewide level. Out of nowhere I had the chance to work in one of the top battleground states in the nation. With the number one senate race in the nation in one of the most important political counties in the nation. It was a no-brainer to me that this was something I had to jump on!”

What will you determine as success in this election cycle?

“Success for me will first be measured on whether I help turn Washoe red as well as the state of Nevada. But most importantly, I do my part to make sure Nevada is left in a positive position in preparation for the 2020 presidential campaign.”

Do you think you will be successful and what challenges do you face?

“I wholeheartedly believe we will be successful. Not sure how to answer the biggest challenge question right this second. I’m here to work hard for Nevadans and if you ever see me around town I would love to hear from you. As far as efforts on this campaign cycle, we are always looking to get people involved and always looking to register people to vote as voter registration is my greatest passion in politics. I want thank Nevadans for welcoming me here as this has been one of the greatest experiences of my life and this is only the start for me here in Nevada. I think my greatest challenge is keeping myself on a normal schedule because I’m such a go-getter and want to be doing something constantly, sometimes just working around the clock organizing, analyzing data, making sure we are in all areas of the community, reading about current issues, etc. ”

Update: As of Thursday, April 12 Taton Thompson resigned his position with the Washoe County Republican Party. His resignation was effective immediately and for reasons unknown at this time.

From the Right: The Rebirth of the Washoe County Republicans...