By ThisIsReno December 1, 2017
Washoe County Sheriff Chuck Allen was joined by members of the Sheriff’s Office staff to present a check for $6,330 to Executive Director Cari Herington and Board President Lisa Dettling of the Nevada Cancer Coalition. Photo: WCSO 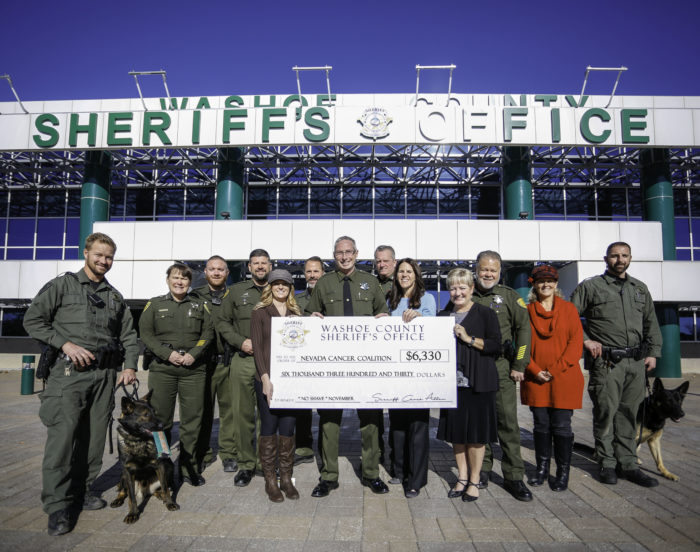 Washoe County Sheriff Chuck Allen was joined by members of the Sheriff’s Office staff to present a check for $6,330 to Executive Director Cari Herington and Board President Lisa Dettling of the Nevada Cancer Coalition. Photo: WCSO

Local non-profits are starting to recieve the benefits from bearded deputies and other members of the Washoe County Sheriff’s Office who are participating in the five-month “no shave” charitable campaign.

Dr. Brittany Baguley was a Criminalist with the Washoe County Sheriff’s Office Forensic Science Division for 10 years before she passed away in 2016. Her contributions to the community were significant.

Dr. Baguley processed over 700 cases through the analysis of trace material and DNA evidence during her tenure with the Sheriff’s Office. Because of her achievements, Dr. Baguley was posthumously bestowed with the Linfield College’s Distinguished Alumna award.

The Brittany Hartzell Baguley Memorial Fund was established in honor of Dr. Baguley’s commitment to service and her generous spirit. The scholarship supports Linfield College chemistry students seeking to follow in the footsteps of Dr. Baguley by working to improve the world through science.

Here’s how the Sheriff’s Office “no-shave” effort works: in exchange for a monthly charitable donation from November through March, Washoe County Sheriff’s Office deputies will be allowed to grow facial hair outside the normal grooming standard. Female deputies are allowed to have relaxed hair standards in exchange for the monthly donation, and civilians may either take advantage of the relaxed grooming standards or wear jeans or hats.

At the end of each month, the donations will be presented to the charity or foundation represented that month. The organizations chosen for 2017/2018 are:

OPINION: The Necessity of Neutrality