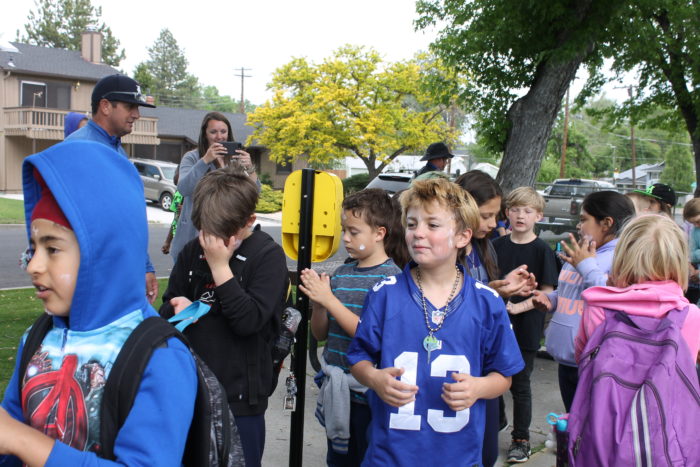 Students from Peavine Elementary School are the first to use a new sunscreen dispenser donated by NCC to Truckee Meadows Parks Foundation. Image: NCC

“Wearing sunscreen is one of the easiest ways to prevent skin cancer, but often people forget to put it on before heading outdoors,” said Cari Herington, executive director at Nevada Cancer Coalition. Placing free sunscreen dispensers in accessible outdoor locations has shown to increase people’s use of sunscreen and other sun-protective measures in cities such as Boston, Atlanta, and Tampa. 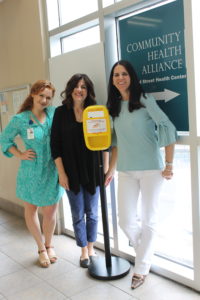 The sunscreen dispenser donations were made by NCC in recognition of Skin Cancer Detection and Prevention Month, recognized each May, and are part of NCC’s Sun Smart Nevada program. Sun Smart Nevada is building programs for sun safety and skin cancer prevention in schools, work places, and outdoor recreational areas throughout the state. “Through our dispenser donation program, we hope to give community partners the tools to help the people they serve stay healthy and prevent skin cancer,” said Herington.

Community Health Alliance’s Record Street Health Center for the Homeless provides comprehensive health care services to more than 1,000 patients annually. The sunscreen dispenser they received is available for use by anyone being served at the downtown Reno Homeless Campus on Record Street.

TMPF provides free STEM, standards-based curriculum for majority free-reduced lunch student population schools that uses citizen science to engage kids with their local parks. The organization plans to use its sunscreen dispenser for the Student Stewards program and also for TMPF camp programs, guided walks, and during special events.

Northern Nevada Children’s Cancer Foundation, among many other services, encourages families to spend time together and to never lose their fun factor amidst their cancer journey. The sunscreen dispenser will be available for families to use when they visit the Foundation’s offices and will be used during multiple outdoor events that support the Foundation each year.

In the U.S. skin cancer is the most commonly diagnosed cancer, and in Nevada it is estimated that this year 790 people will be diagnosed with melanoma, the deadliest form. The number one cause of skin cancer is exposure to ultraviolet (UV) rays from the sun. Sunburns at any age are dangerous, however one or more blistering sunburns in childhood or as a teenager can more than double one’s risk of melanoma later in life.