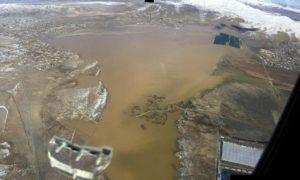 Nevada Governor Brian Sandoval signed a letter today requesting a disaster declaration for Lemmon Valley and other parts of Nevada affected by flooding.

“I was grateful for the three-day approval for the funds related to the January event, but even at that time, we knew the sustained weather event would likely require a second request from our federal partners,” he said. “The February flood disproportionately damaged Elko County, Douglas County and Carson City and has continued to devastate Lemmon Valley in Washoe County.

“The state is working at an accelerated pace to ensure residents who are still suffering receive the help they need today and requesting a partnership with the Army Corp of Engineers to make sure we are better prepared for snow runoff and spring flooding.”

Lemmon Valley flooding is a priority, Sandoval said, and more than 190 personnel are helping residents by filling sandbags, wrapping homes with visqueen plastic and placing sandbags around homes.

Who: Washoe County and the North Valleys Incident Command Team

Traffic detours coming to Lemmon Drive at US 395