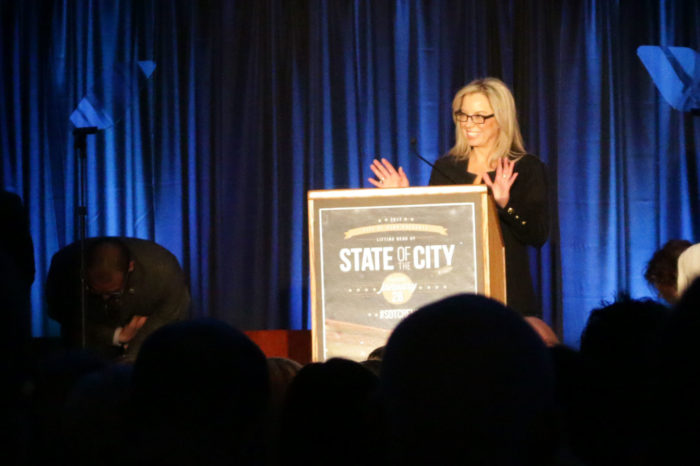 The City of Reno tops the list of local governments in how much it spends on its annual State of the City Address.

At more than $10,000 in expenses, Reno Mayor Hillary Schieve’s 2017 speech, held in January at Atlantic Aviation, featured a live band, a shuttle between parking and the event, and professionally produced videos representing each councilmember.

The expense is in contrast to other local government entities, which did not spend money on their annual addresses.

Washoe County’s state of the county, held in September 2016, at the county’s administrative complex, did not go above normal costs, county staff said.

“Since Washoe County is funded by taxpayers, there was a key effort to be fiscally conservative,” said county spokesperson Nancy Leuenhagen. “The entire presentation was produced in-house with existing staff and the division’s contract TV vendor, WCTV.”

“We did receive a private donation to provide desserts,” said school district spokesperson Megan Downs. “These desserts were made by students to showcase their work, so the donation basically paid for the ingredients.”

The City of Sparks’ spokesperson Adam Mayberry said that only staff time went into the recent Sparks city address.

“(Mayor Gino Martini’s) remarks are very traditional with no multimedia presentations other than a rotating slide show of pictures over the last 12 months,” Mayberry explained. “He sits at the dais and reads from a script and often goes off script and talks extemporaneously.

“He speaks from his heart.  We find that more simple, is sometimes better,” Mayberry added.

“Production of the State of the City address is a function of the Office of Communications and Community Engagement (OCCE), which is a division of the City Manager’s Office,” said spokesperson Matt Brown. “The funds used are from the City’s general fund and come from the Council-approved OCCE budget, specifically strategic communications.”

Watch Reno’s 2017 State of the City Address and read the transcript at http://www.reno.gov/Home/Components/News/News/16133/576

UPDATE:  A clarifying statement from the County was changed from the original in this article.