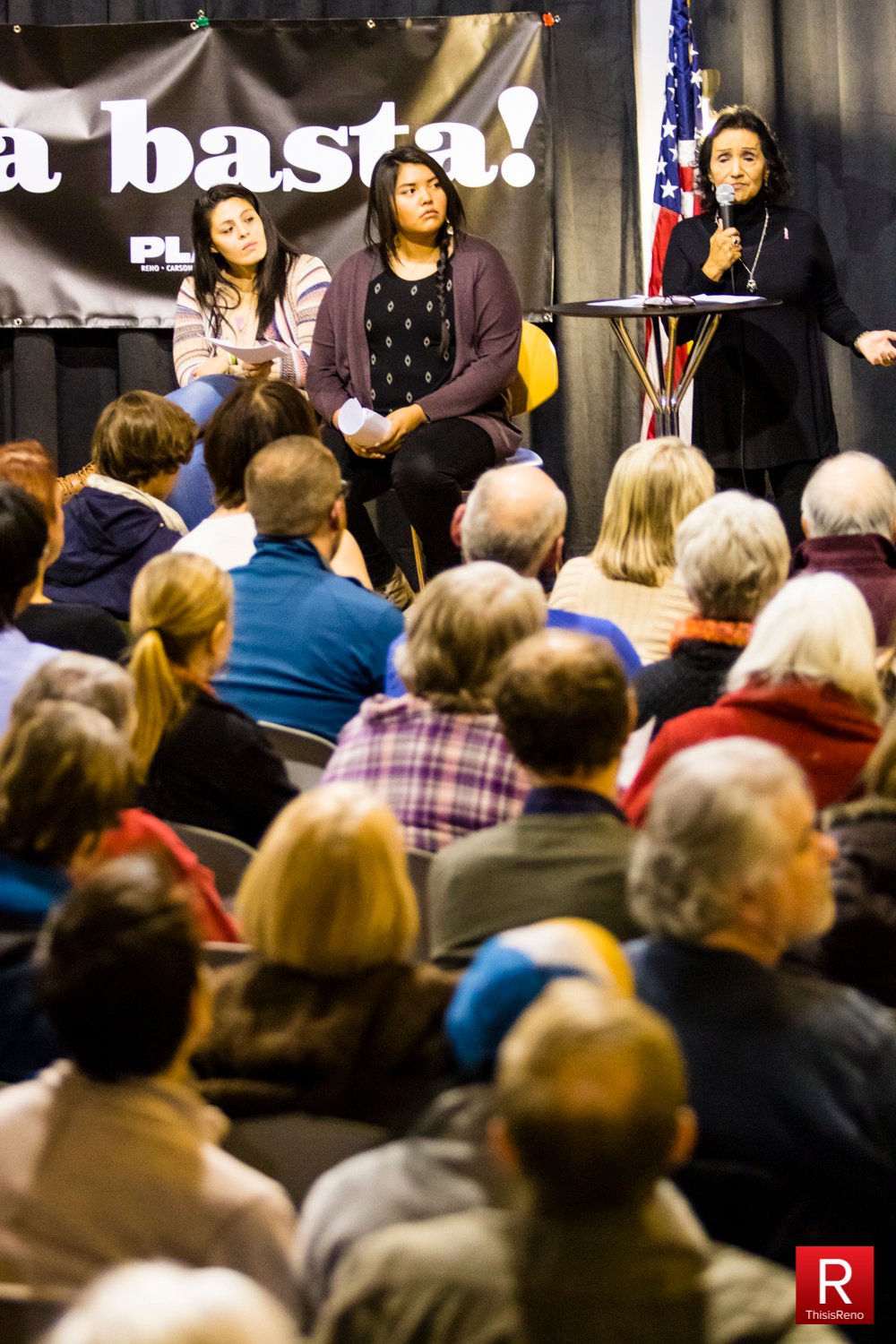 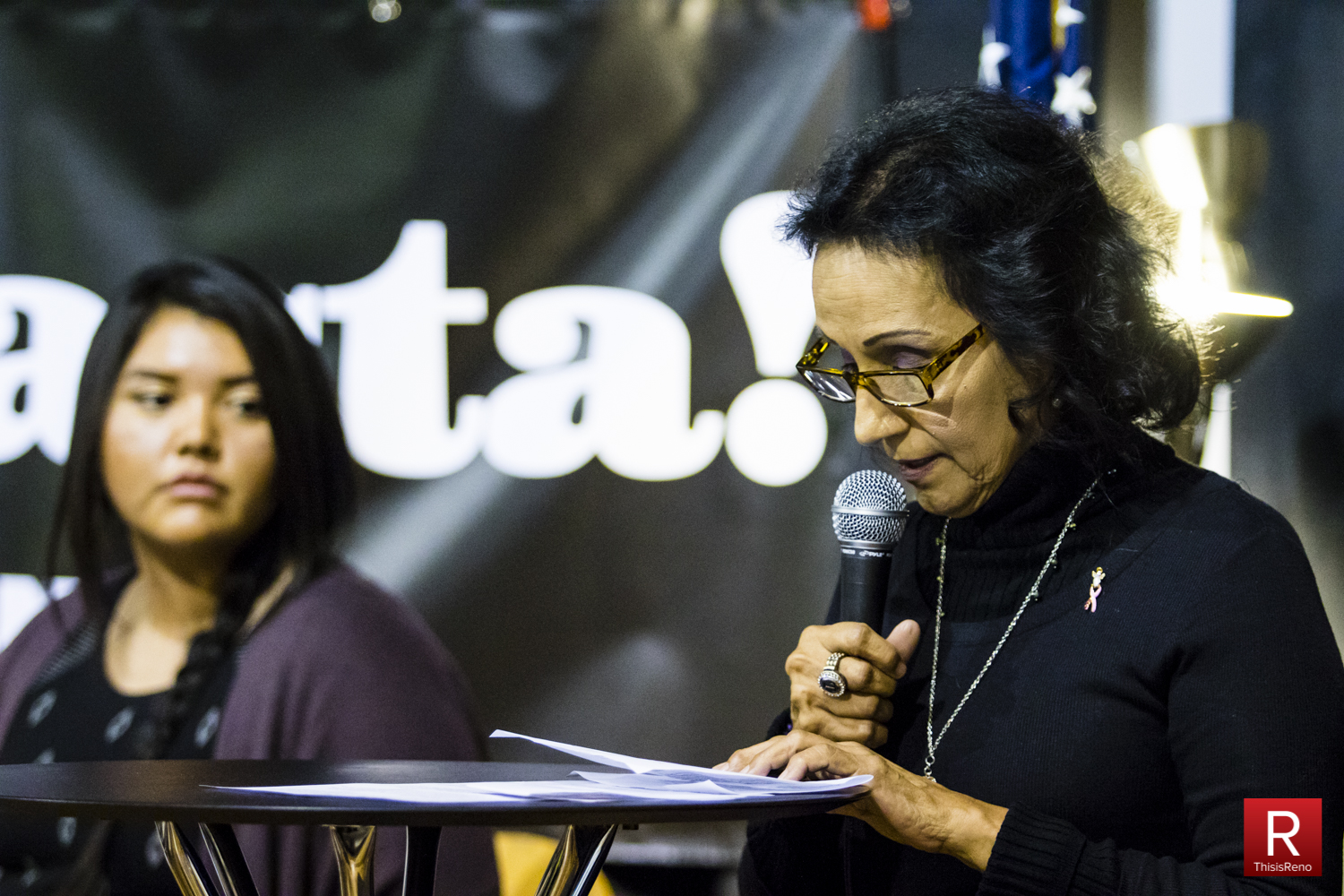 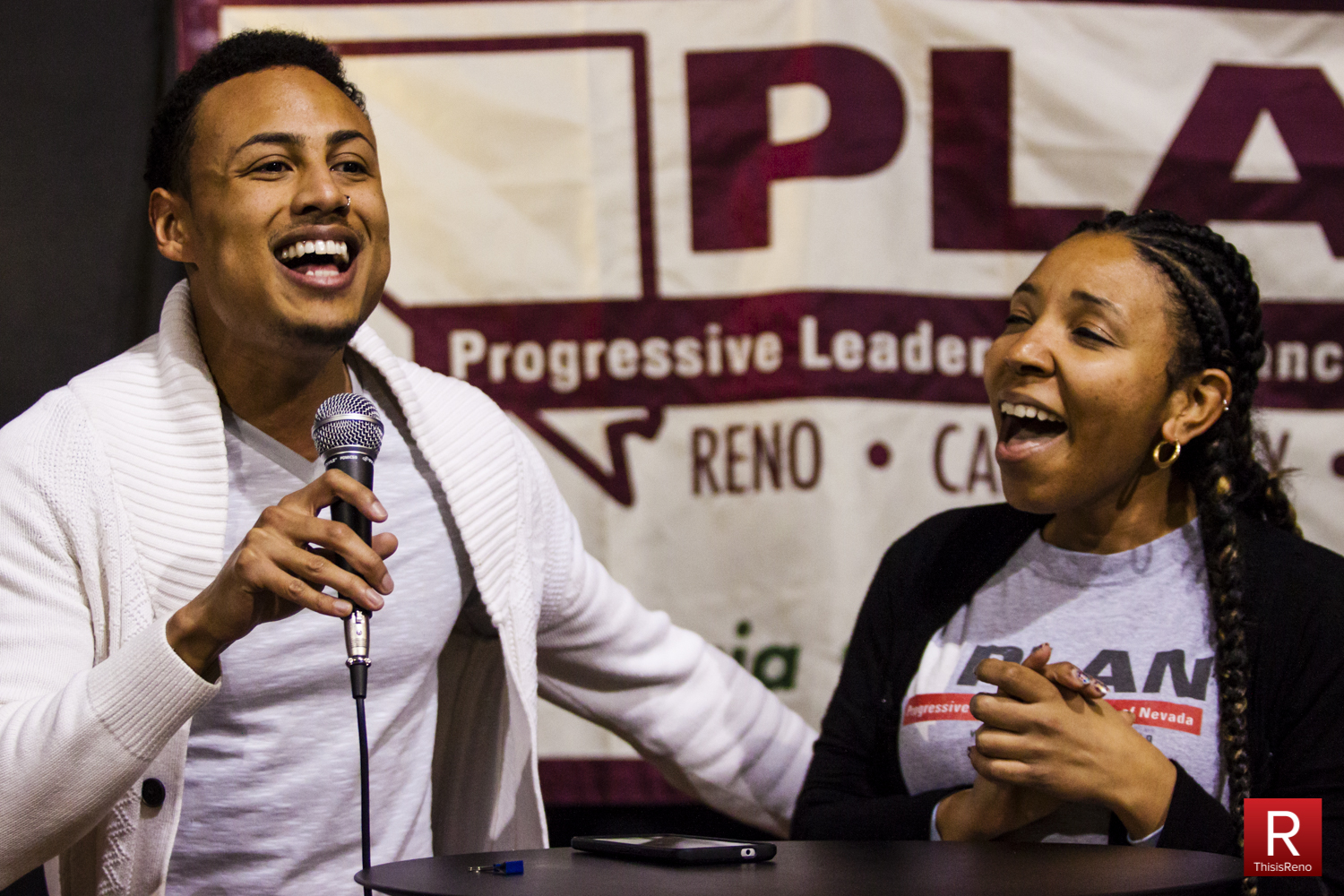 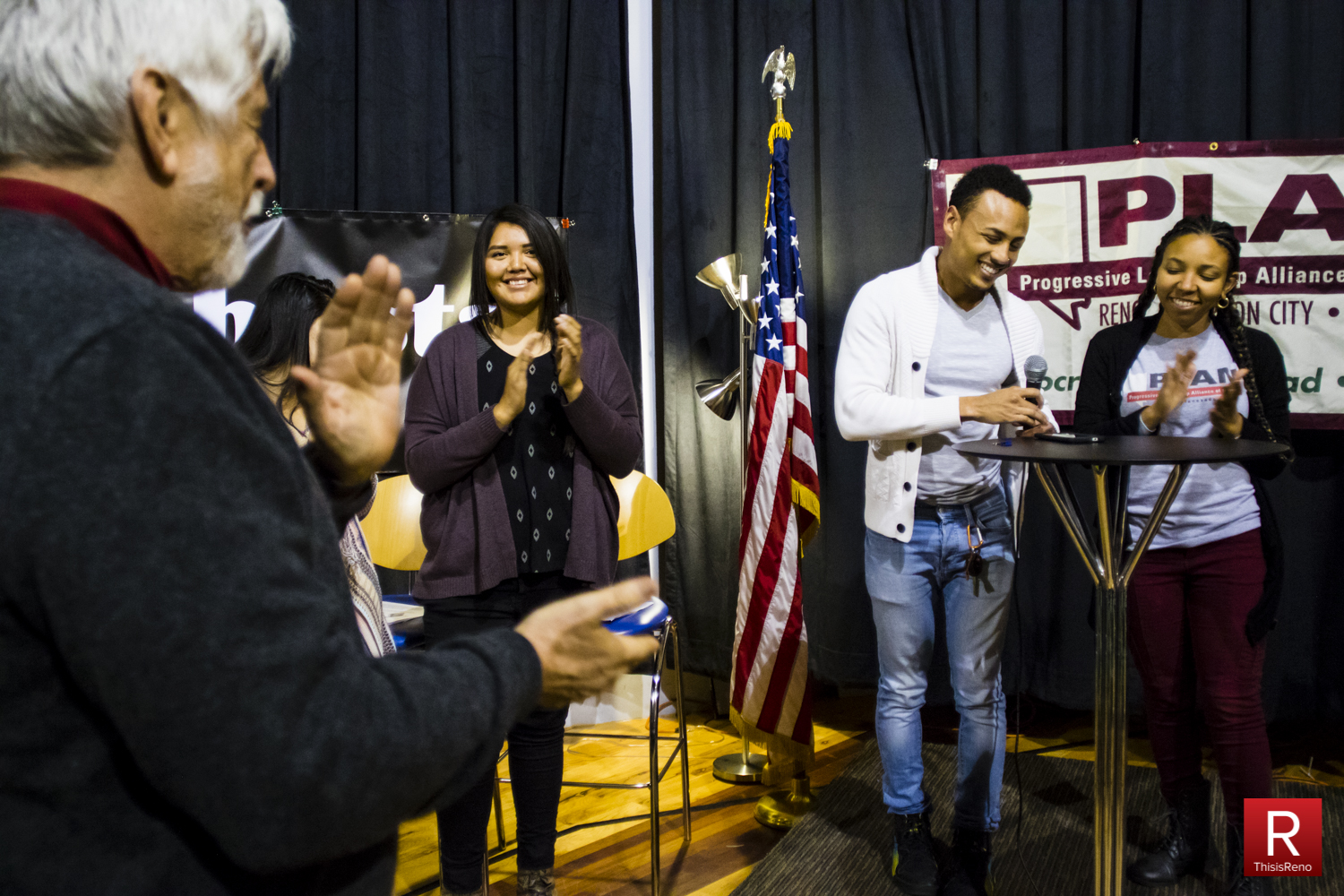 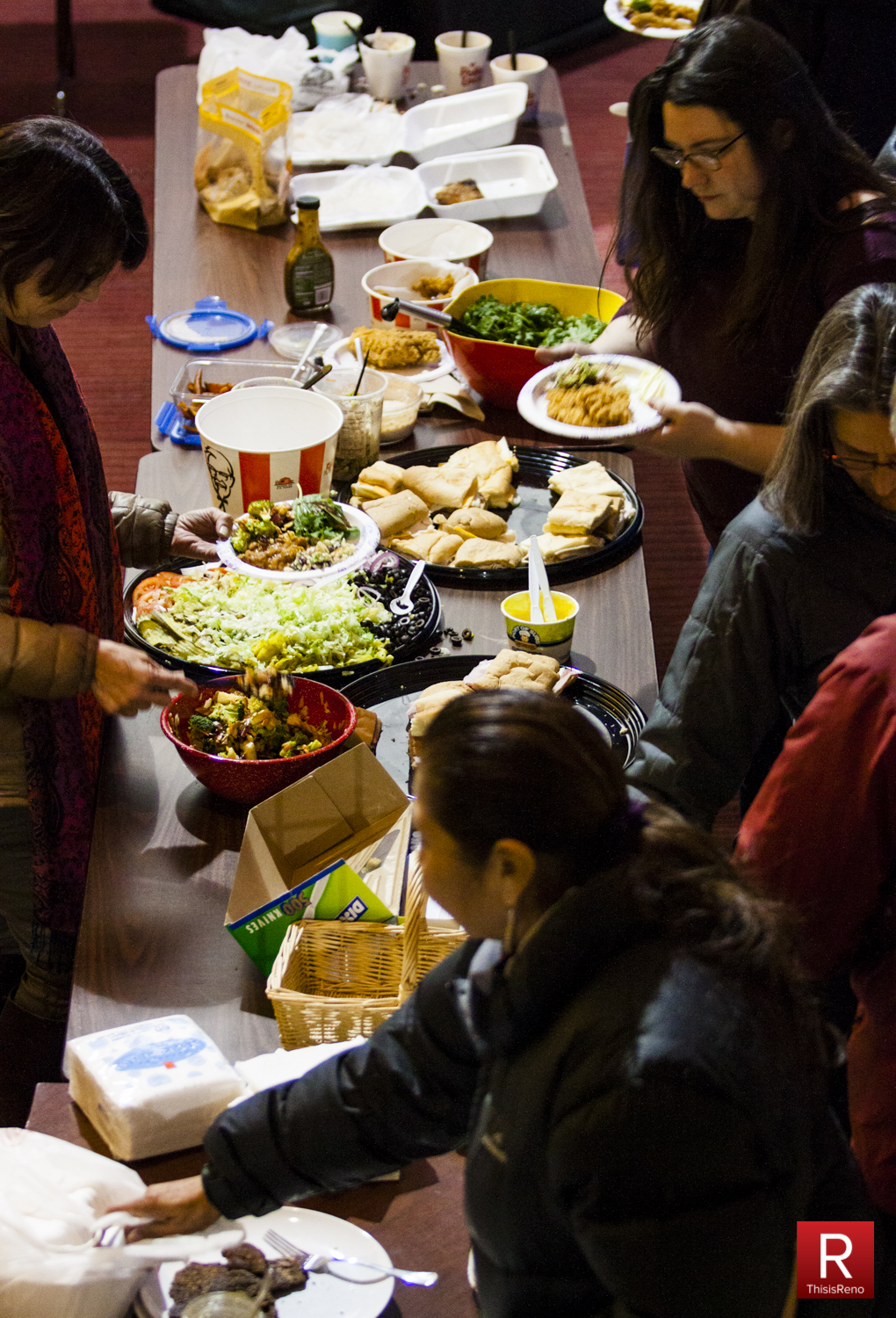 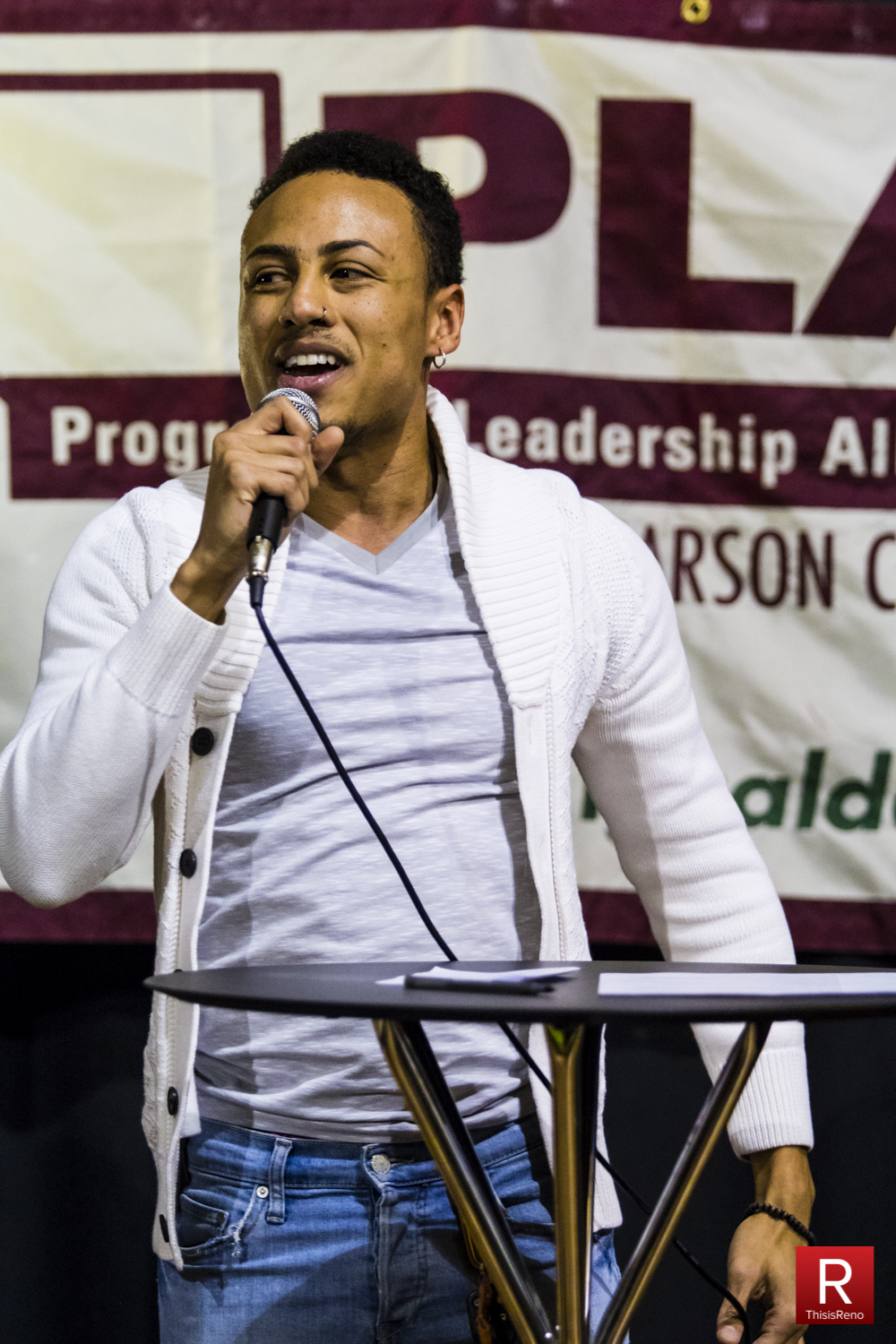 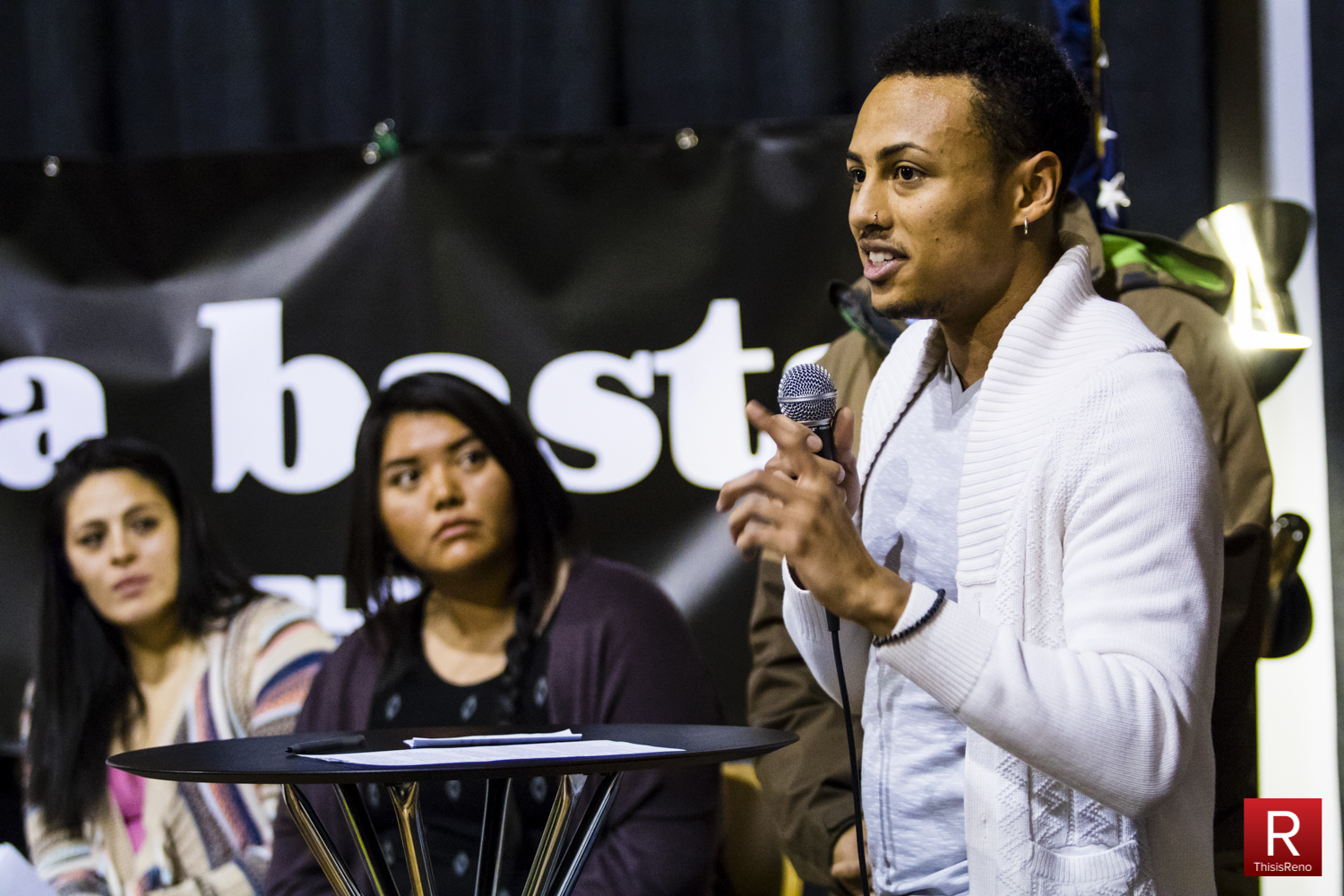 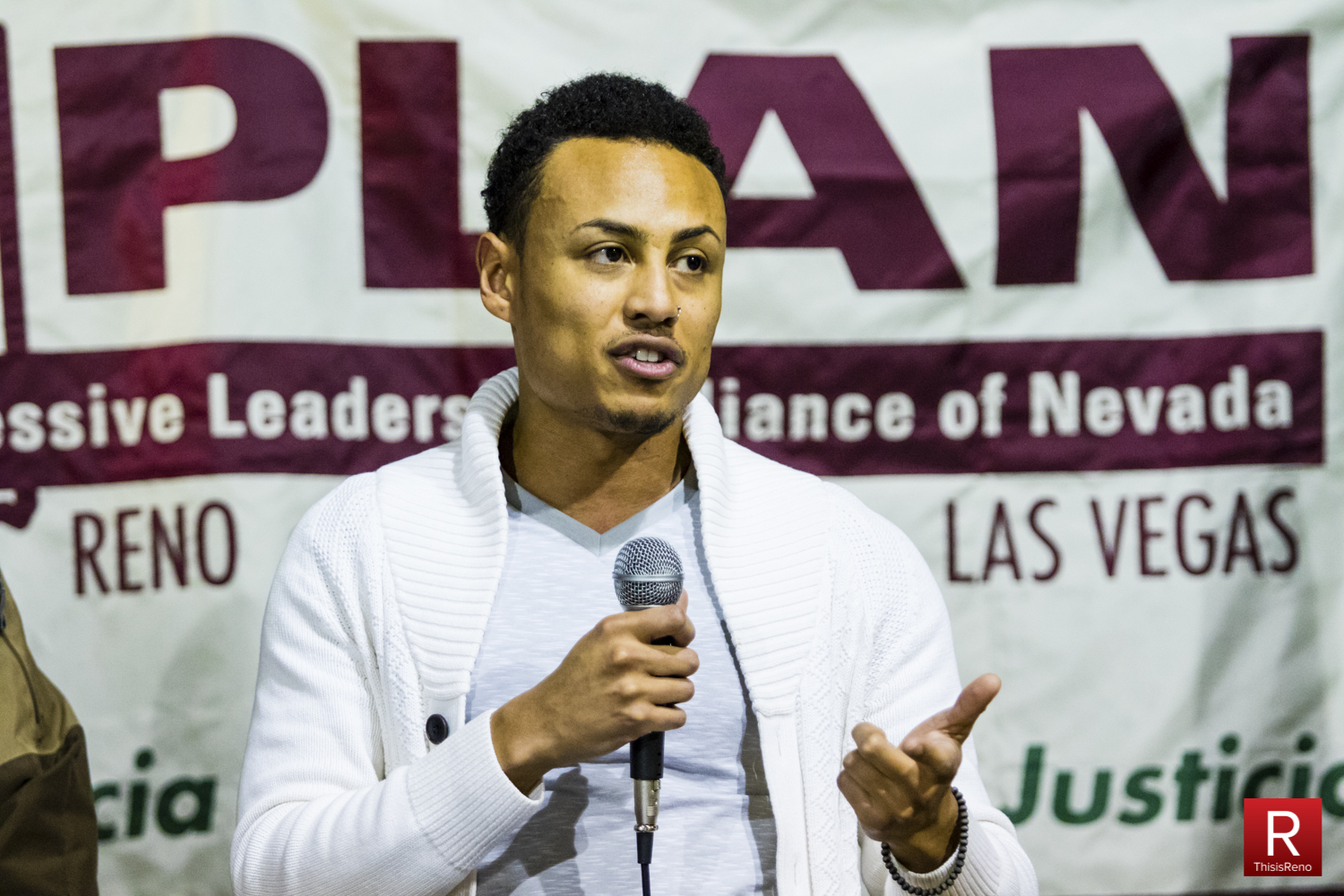 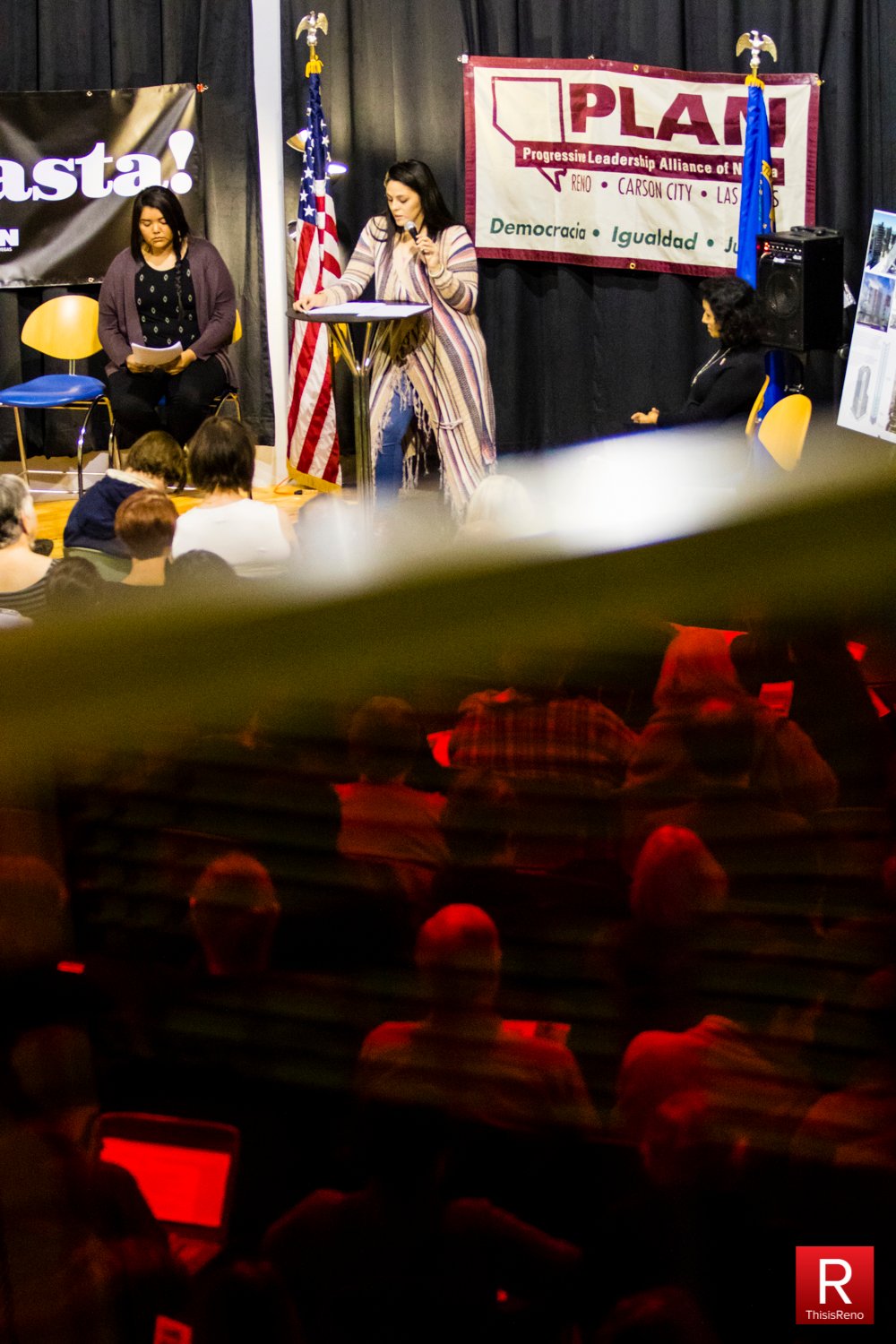 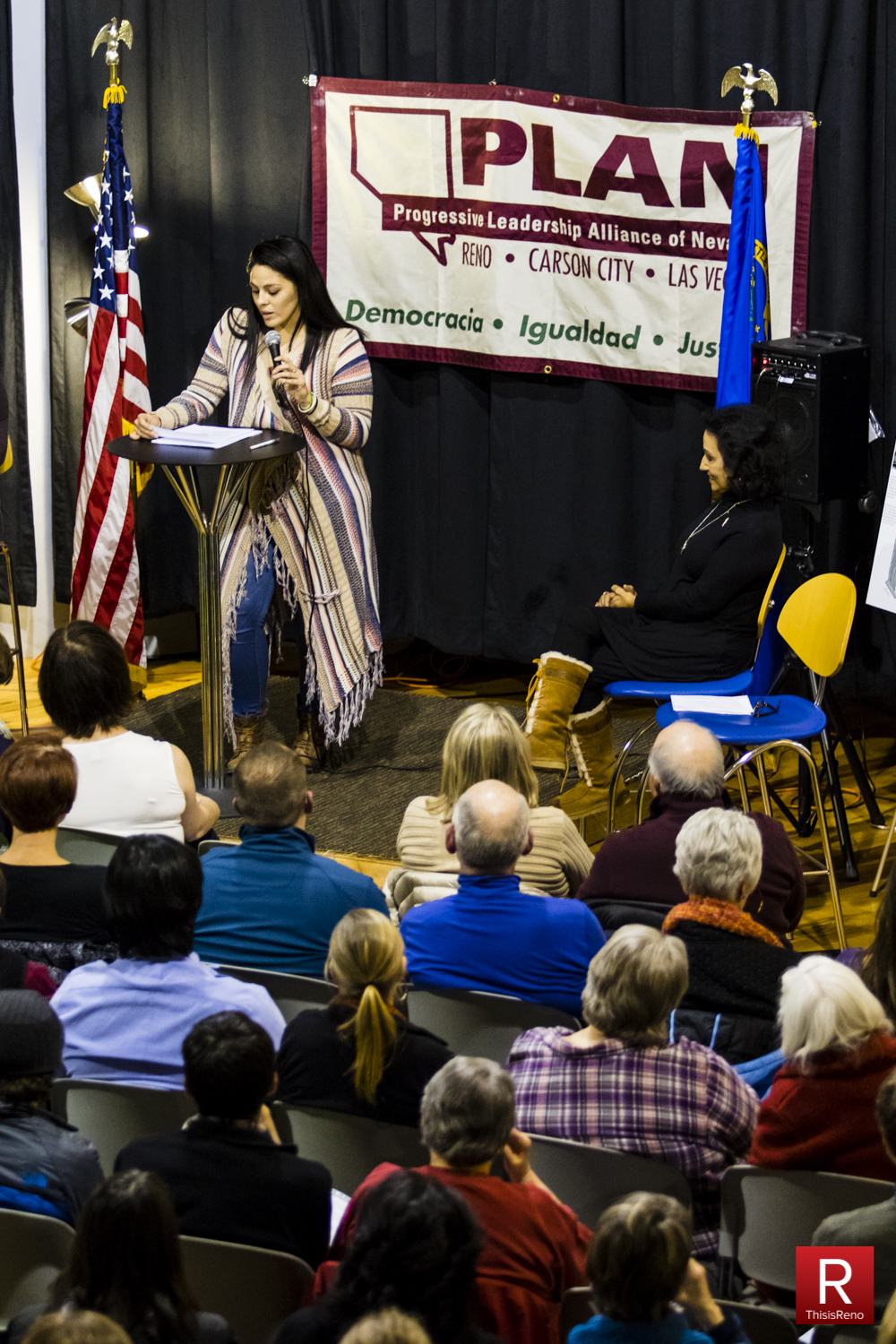 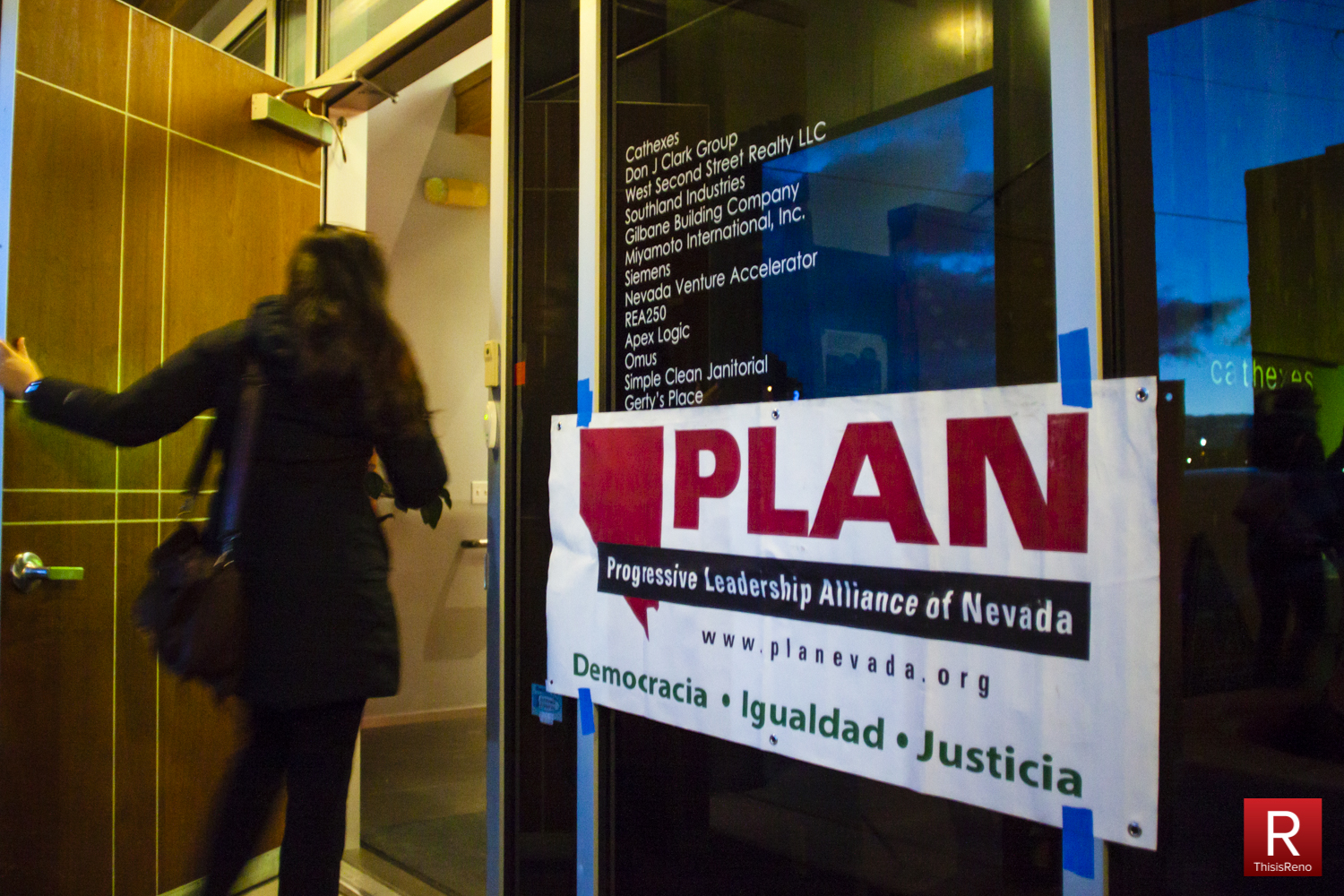 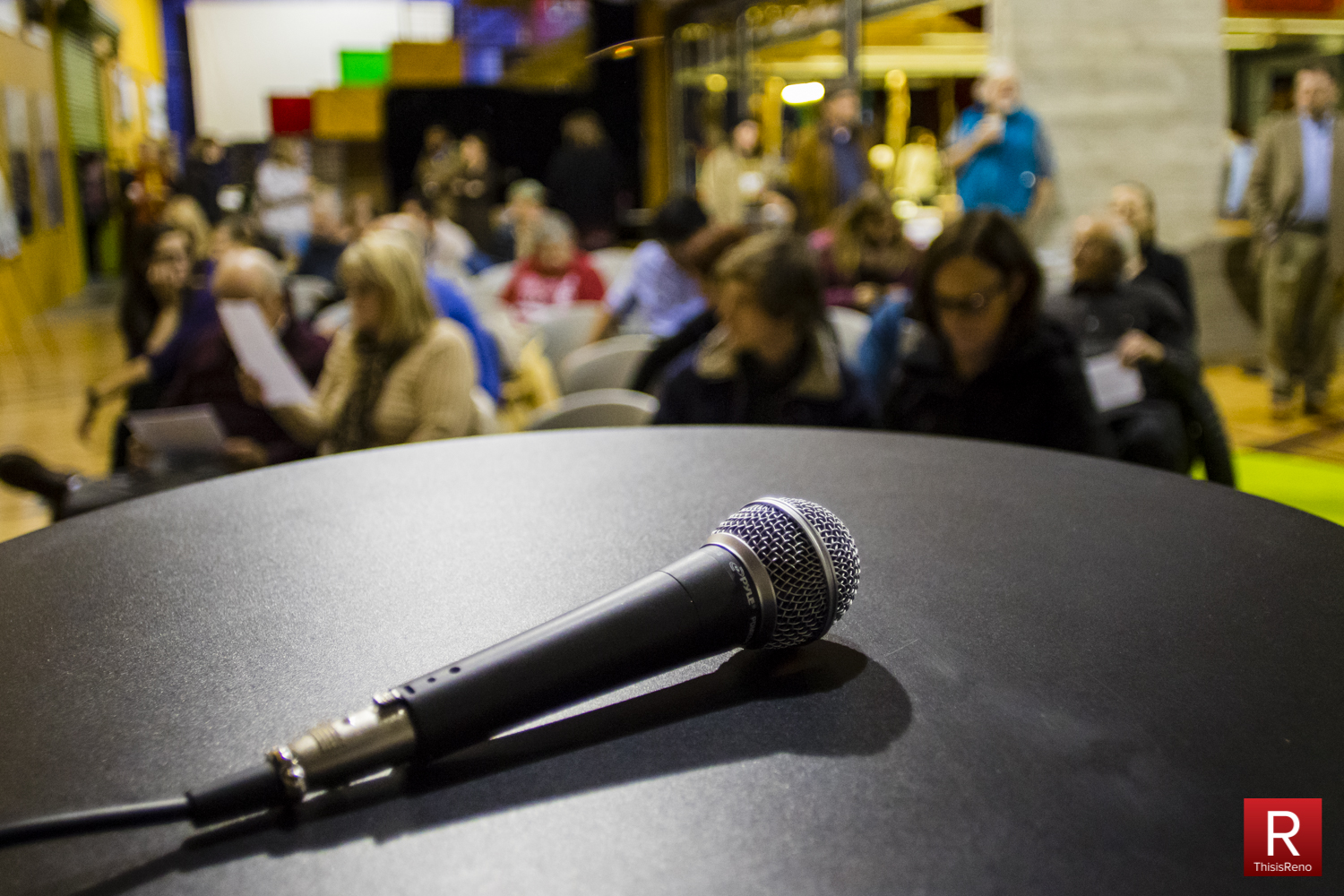 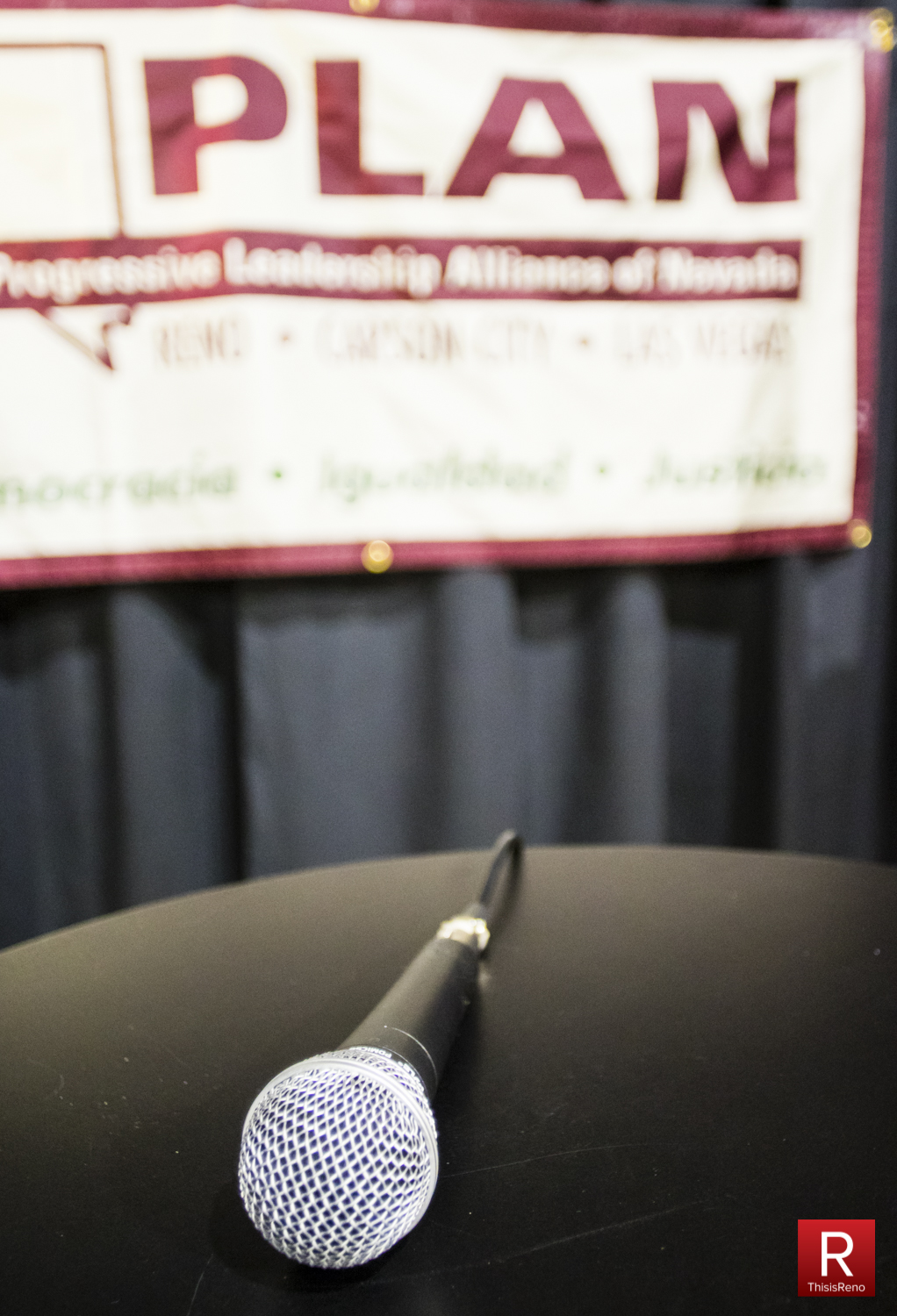 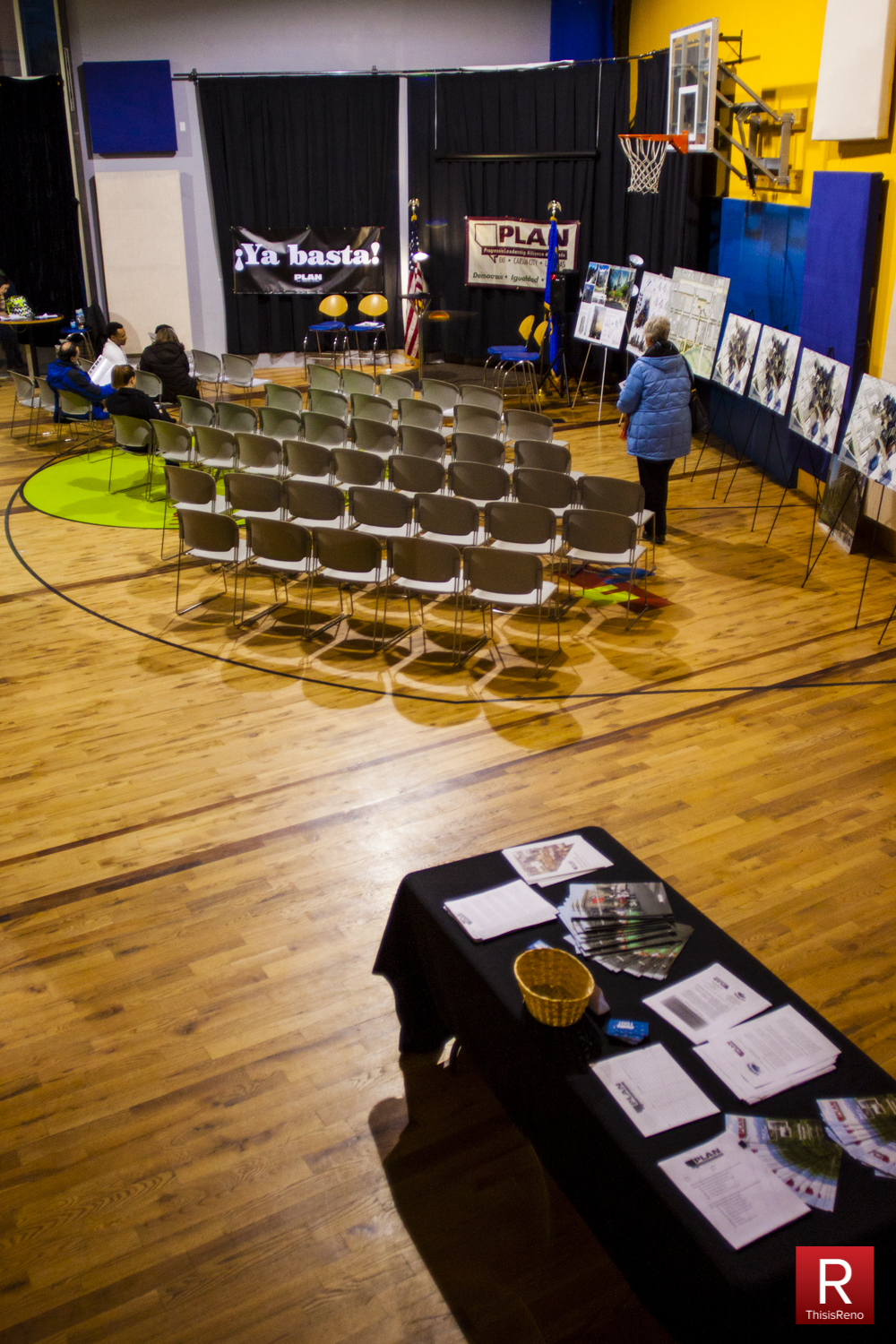 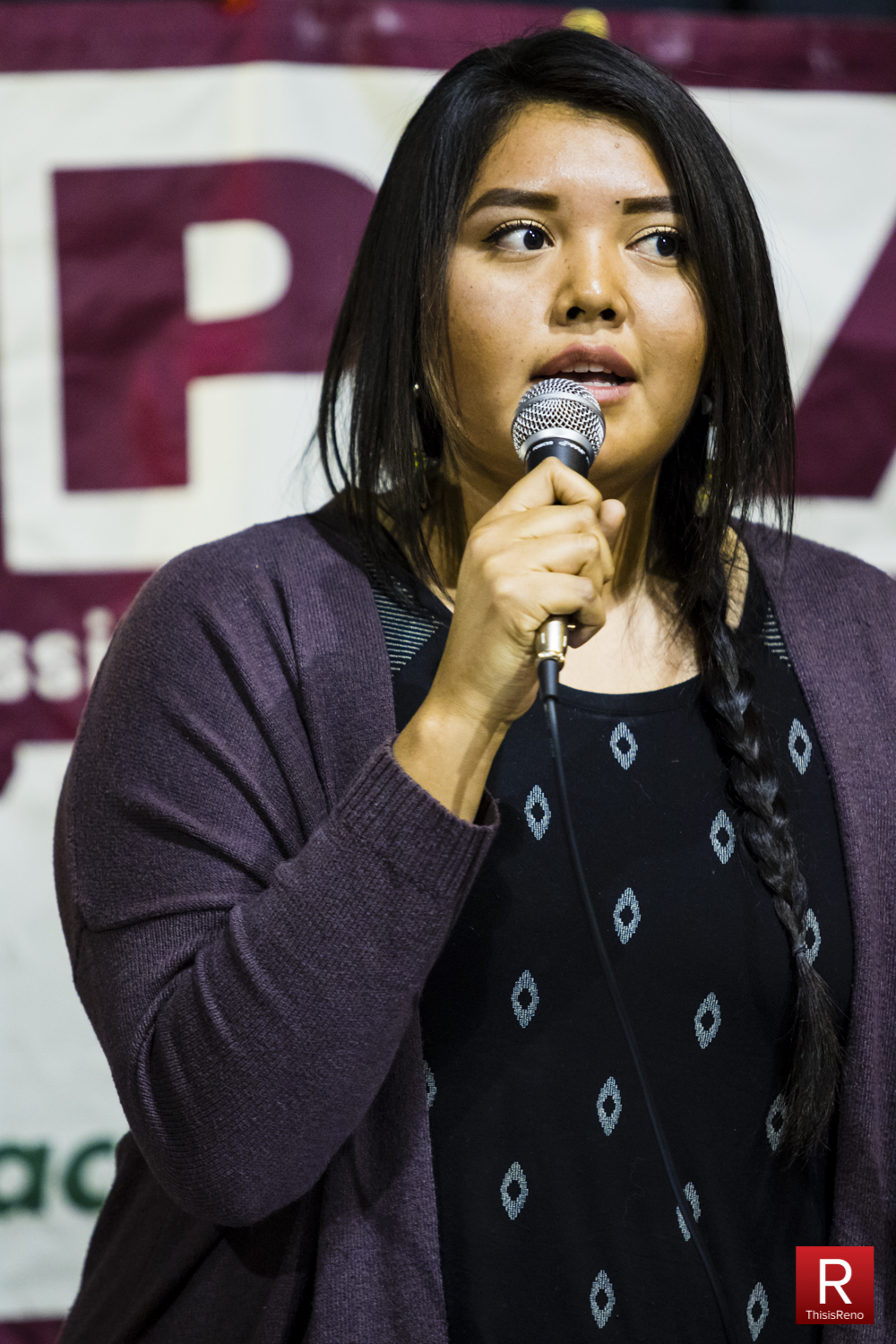 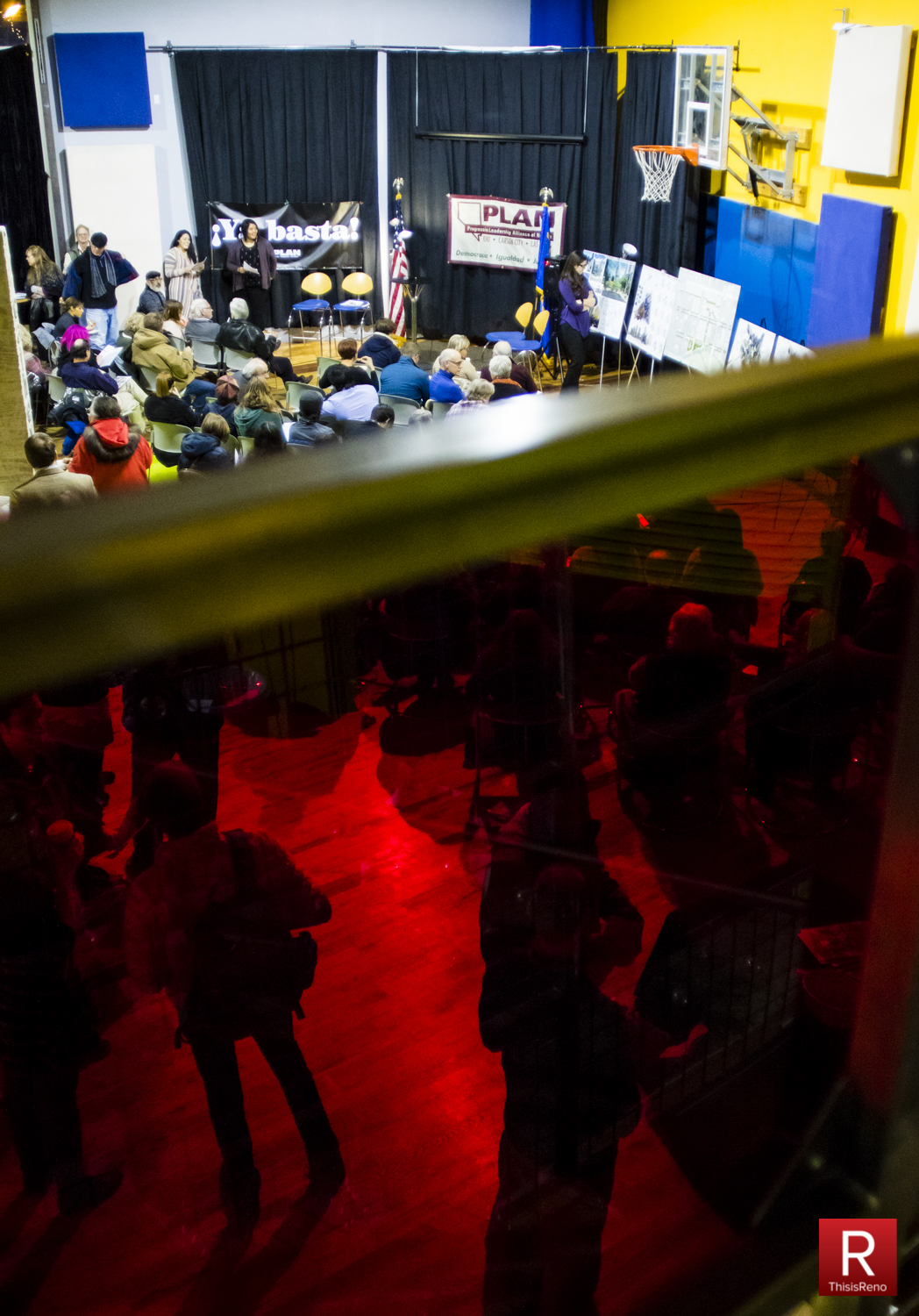 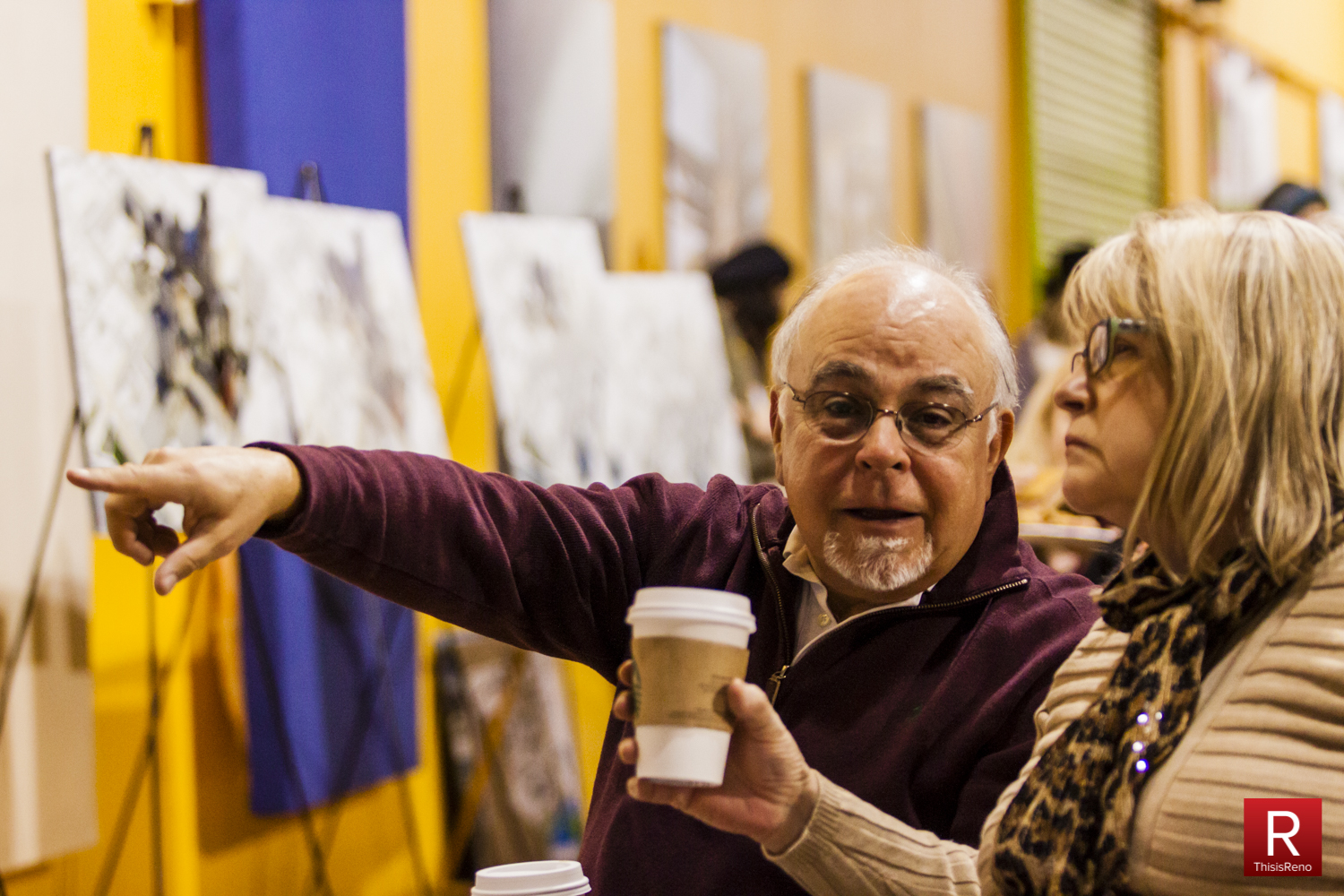 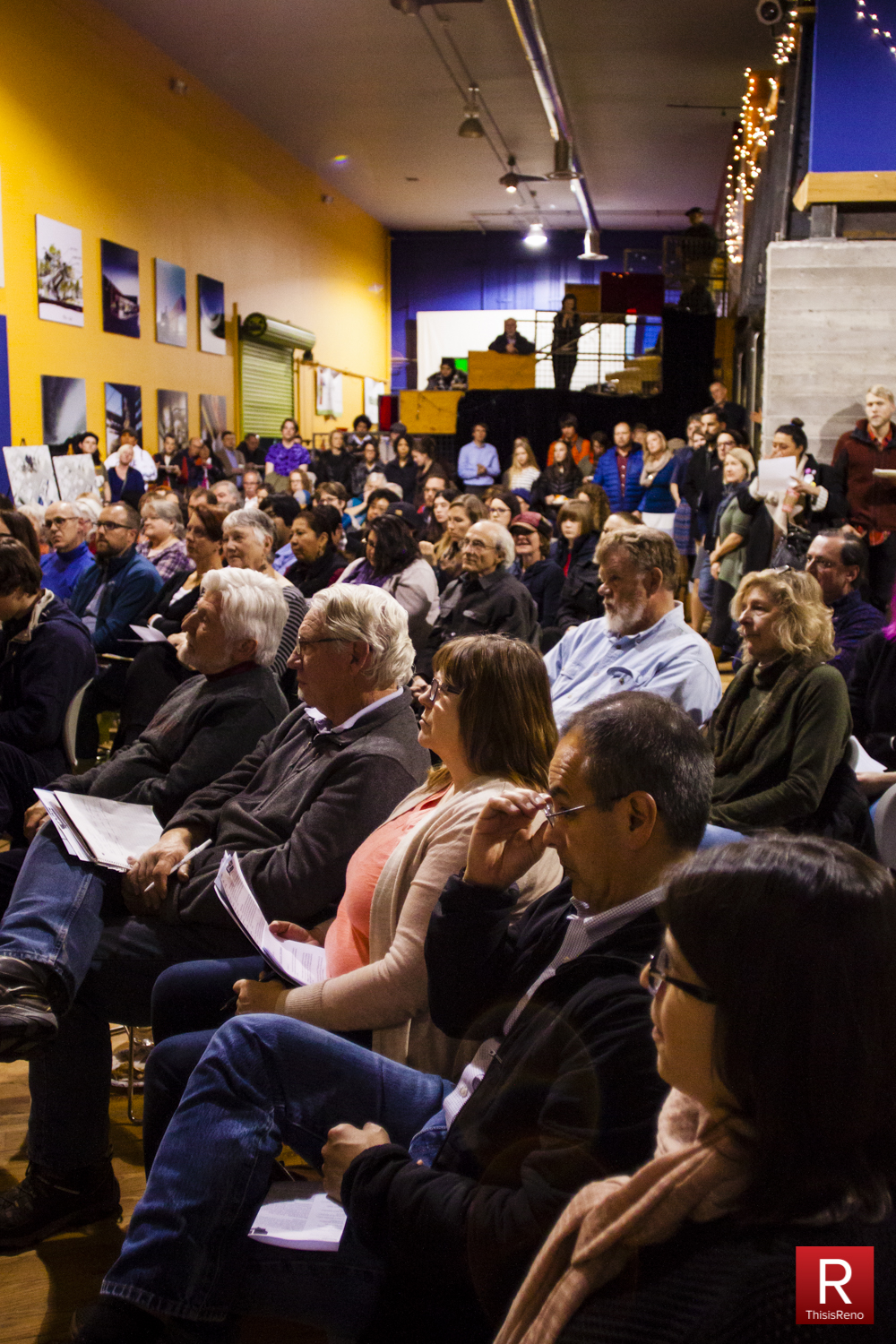 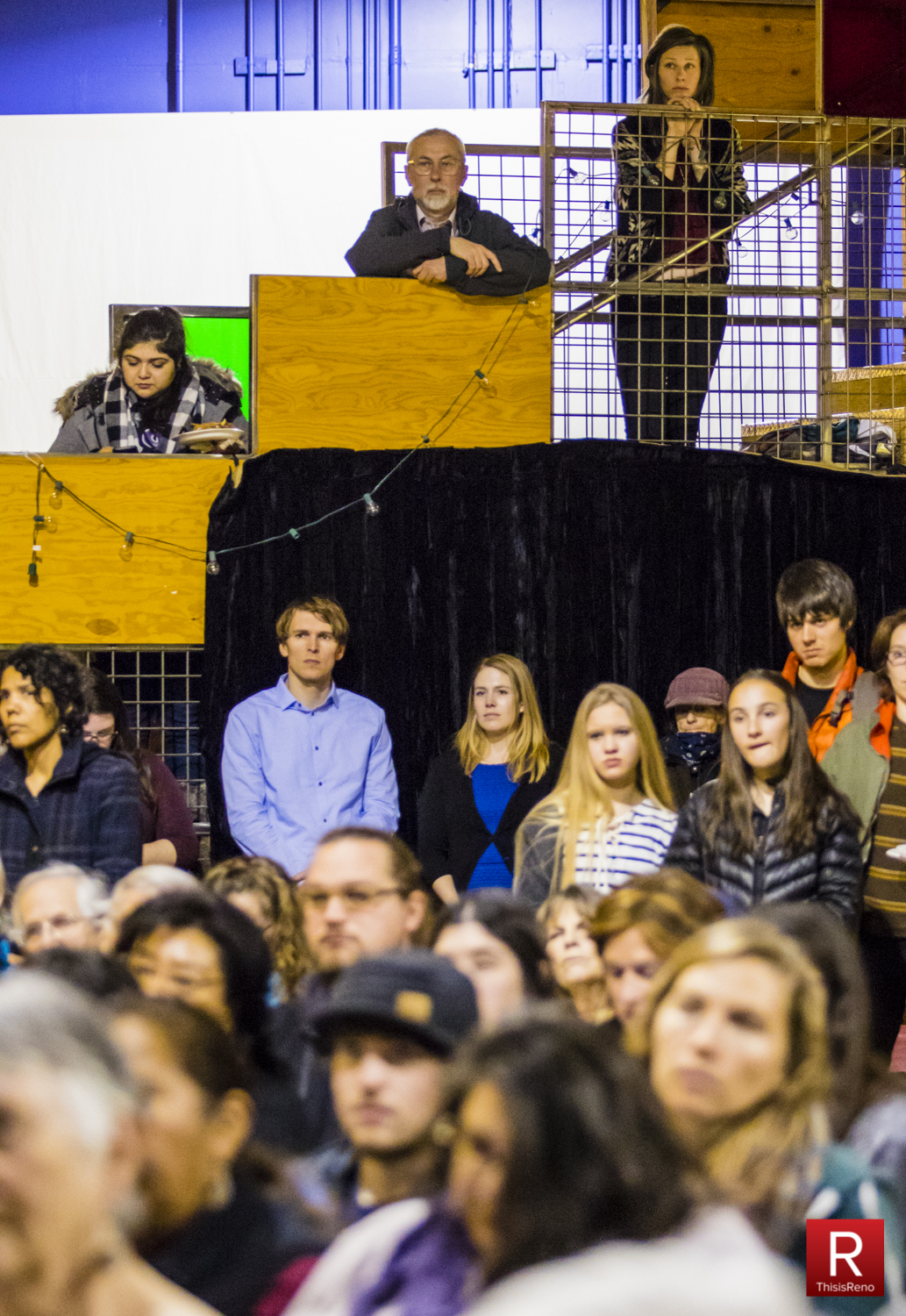 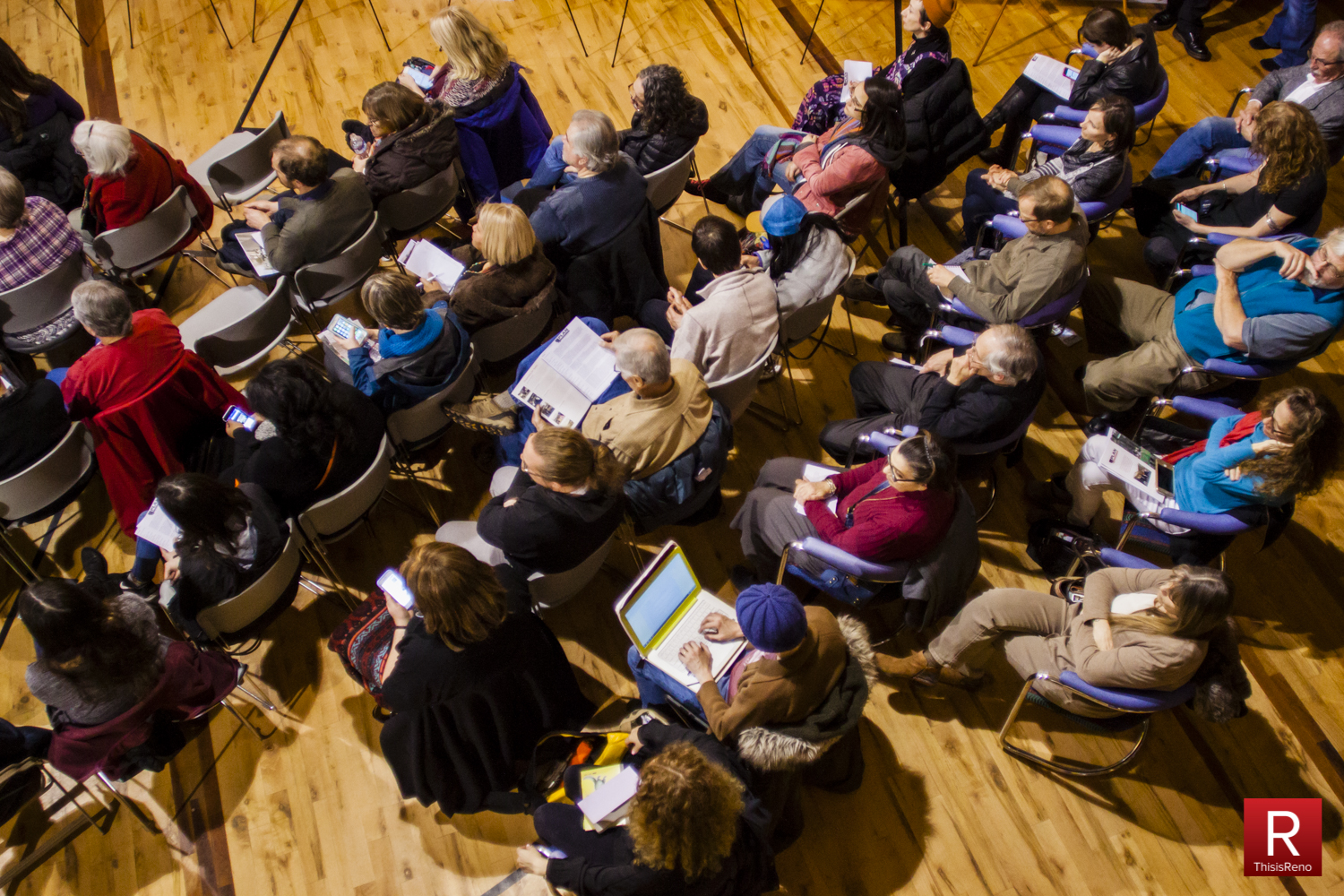 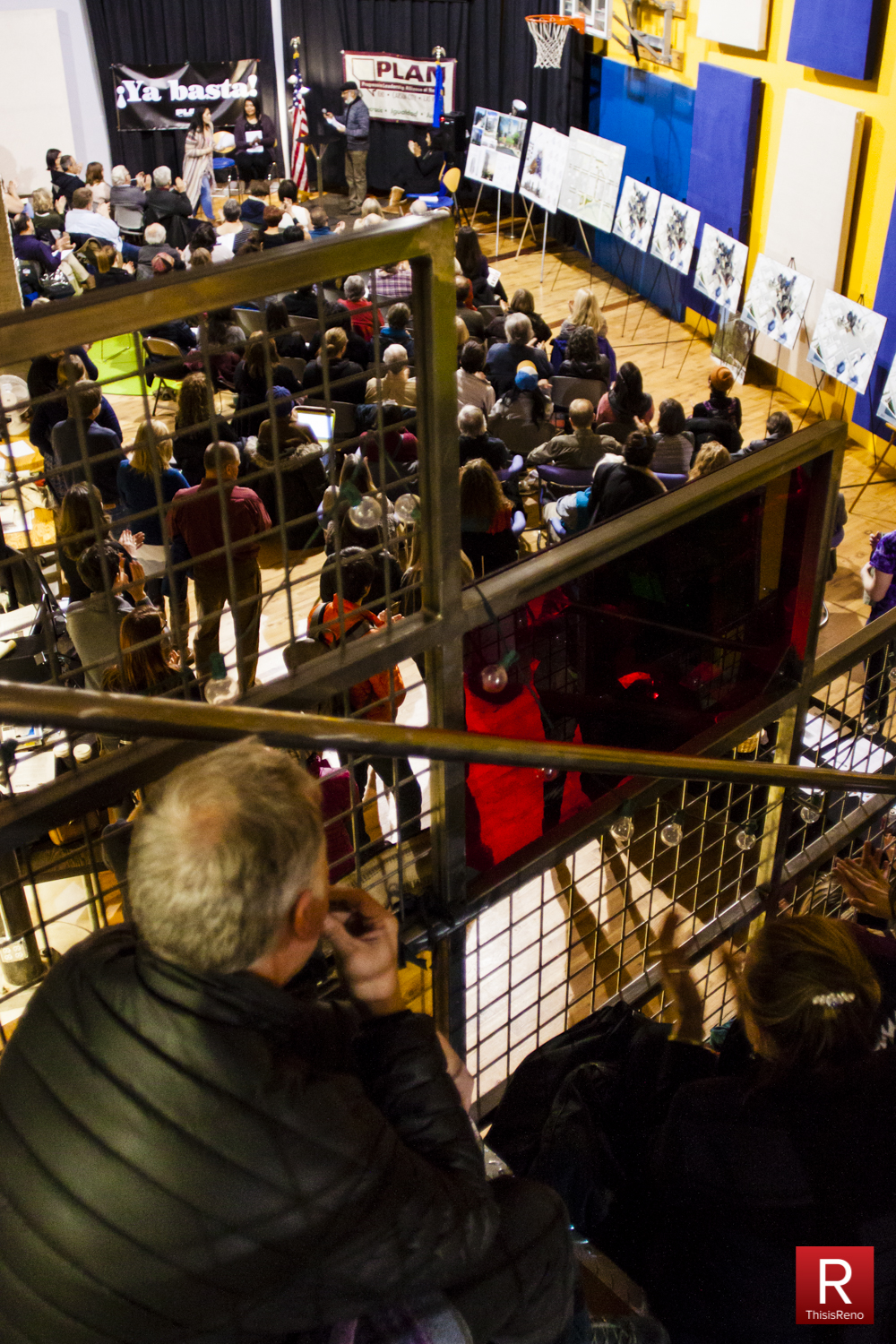 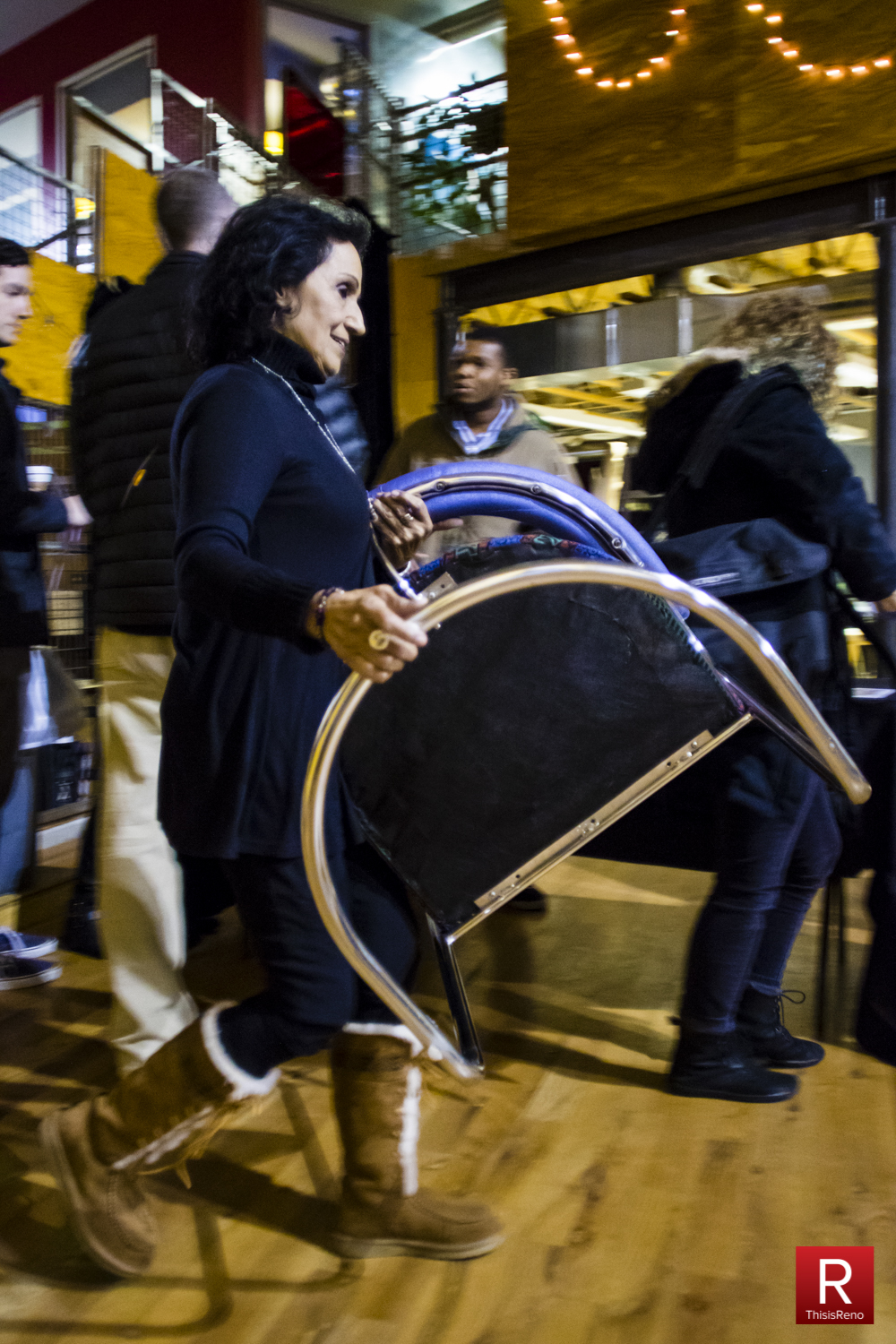 Progressive Leadership Alliance of Nevada’s (PLAN) “Progressive State of the State” drew a standing room only crowd on Thursday night despite coinciding with the City of Reno’s State of the City address. More than 160 people attended the event, filling not only the main room, but also ascending a flight of stairs and surrounding the potluck area.

Designed with a distinct similarity to those of government press conferences, the U.S. and Nevada flags presiding on each side of the podium transformed the Cathexes architecture offices for the evening. Prior to the event little evidence of the evening’s proceedings were apparent; a few PLAN banners and a good number of chairs sat unmoved. However within a short period of time as people began to arrive the small potluck turned into a veritable buffet and volunteers were scrambling to bring out additional chairs to accommodate the large turnout.

After a few calls to get everyone’s attention, the crowd joined in singing “Woke Up This Morning” and filled the building with their joyous harmony. As the first speaker, Theresa Navarro opened the event with a somber message. She noted that she was wearing all black intentionally as she was in mourning. Navarro related to the audience that in a recent confrontation she had been told to go back to her country, referencing her Latino heritage. She ended her speech with a quote from Albert Einstein: “Peace cannot be kept by force; it can only be achieved by understanding.” 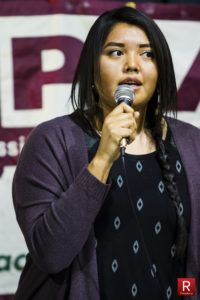 Autumn Harry, a local activist and environmental fellow with PLAN, led the presentation for the majority of the evening and covering a variety of topics. She discussed the fact that, after an adjustment for inflation, the Nevada median household income was down by 16 percent since 2007 while the State itself was making more money for businesses. The trickle-down, she said, is not working.

“Despite all those tax breaks, subsidies, and legislative special sessions to help business, Nevada’s households are poorer than they were 10 years ago,” Harry said. “Nevada has been business friendly, but business hasn’t been Nevada-friendly.”

Speaking on behalf of PLAN, she moved on to address legislative issues including a $15 minimum wage, equal pay for women, automatic voter registration, and protection of Nevada’s natural resources, all of which, she said, businesses would fight against.

Harry ended her speech by urging that government should be working for working Nevadans not just businesses.

Other speakers for the evening included Krystavel Mendez, who also translated Harry’s speech in Spanish, and Nathaniel Phillipps. Phillipps closed the evening with a call for participation in PLAN’s day of action at the state legislature on March 15, noting that they weren’t afraid of causing a little disruption to get legislators to open their eyes. Closing out the night, he led the audience in a chant: “I believe that we will win.”