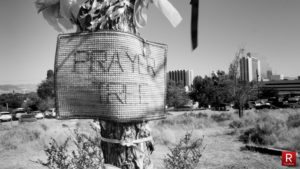 Prayer tree at the Hillside Cemetery.

Drew Lawton of Sierra Memorial Gardens issued today a press statement about the controversial restoration of the historic Hillside Cemetery.

The plans are suspended, he said. His statement:

There was no indication when the plans would be revisited or changed.

Family members of descendants, who have been actively protesting the plans, met today at the downtown Washoe County library to discuss the situation.

The city said it has no authority to do anything about Lawton’s plans. The county health district issued a permit to exhume the remains, which was originally scheduled to be on or around Sept. 30, 2016.