Remains Scheduled To Be Moved At Hillside Cemetery 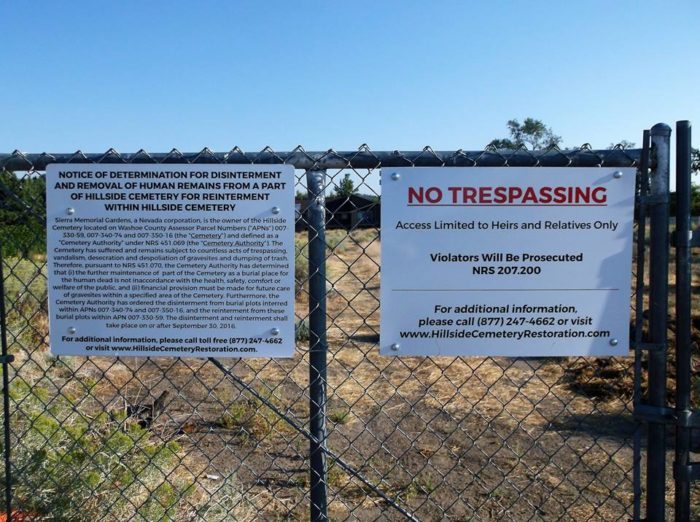 Tryon, who’s been volunteering to clean up the property near the University of Nevada, Reno for the past three years, said that Sierra Memorial Gardens, the cemetery’s owner, hastily noticed the exhumation this past week.

“Basically they’re going to start exhumations on or after Sept. 30, 2016,” she said. “We discovered the permits to exhume. They have not notified any family members. They just put the signs up. They didn’t even let me know. When I went up Saturday to clean, the signs were already on the fence.”

A website about the project said that the cemetery was not kept up and will be restored, which involves disinterment and reinterment of remains:

In 1921 the City of Reno made a determination that burial plots should no longer be sold in the Hillside Cemetery. Also, since no funding mechanism was in place for the care of the Hillside Cemetery, the cemetery kept falling further and further into disrepair and subject to vandalism and desecration.

Some 50 years later in 1971, the City of Reno resolved to restore the cemetery by consolidating the southern portion to the northern portion of Hillside. In 1973, the State of Nevada authorized legislation for the restoration. Unfortunately, the original cemetery owner’s heirs came forward, chose to pay back taxes instead and the City of Reno was prevented from pursuing its plan for restoration. They later sold their interest. The cemetery is now owned by a private cemetery authority that is pleased to be able to bring the envisioned restoration project to fruition.

Update 8/30/2016: Property owner J. Drew Lawton sent the following statement in an email: “The Notice of Restoration is to fully complied with Nevada law. We have posted notices around the property and have created a website to identify and communicate with family members of the deceased on the future restoration plans for Hillside Cemetery. If you are a family member or relative of someone at Hillside Cemetery please visit our website Hillsidecemeteryrestoration.com or call our toll free at 877-247-4662.”

The project is being called a restoration:

“The restoration will be a privately funded consolidation of the cemetery to its northern section with appropriate monuments, memorials, fencing and financial provision for the cemetery’s ongoing care.  The restoration is enabled by longstanding Nevada law and will be accomplished by archaeologists and other professionals and experts experienced in such relocation and restoration projects.”

Tryon said that she helped to set up the Hillside Cemetery Preservation Foundation, a non-profit, to raise funds in order to preserve and care for the cemetery.

She said she is worried the project will ultimately be for development.

A notice at the cemetery indicates that the property “has suffered and remains subject to countless acts of trespassing, vandalism, desecration and despoliation of grave sites and dumping of trash.” It shows that remains will be moved on or after Sept. 30.

Tryon said the project will be devastating to families of descendants.

“I really do want to protect the families from this. It’s horrific what it does to a family — no matter how long these ancestors have been gone,” she said. “These are our founding fathers and they deserve somebody taking care of them.” 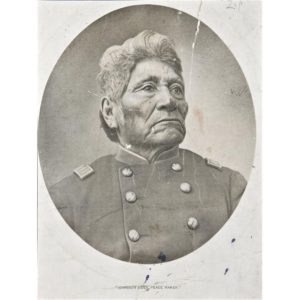 The Historic Reno Preservation Society published an article in 2013 describing the property and its owners:

“Drew Lawton says he and his father are still working toward a plan for the site, but have no firm details to share at this point. It is evident that the Lawtons care what happens to this cemetery and those buried there but there is no easy solution. Drew invites anyone with questions or suggestions to call Drew at his office at Sierra Memorial Gardens, 775-323-1835.”
Residents buried there include:

City To Consider Becoming a Stakeholder of Historic Hillside Cemetery

City: No Authority To Prevent Exhumation of Remains From Historic...