The Washoe Golf Course’s private managers received a six-month contract extension today after the County Commission heard debate over how much the course owes the county.

“The licensee is currently behind in payments to Washoe County in an amount over $600,000 not including accrued late fees,” according to a county staff report. Solaro said there is an additional $400,000 in late fees. 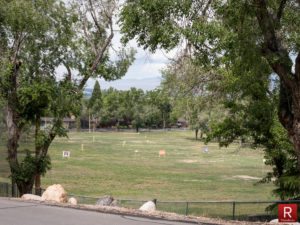 “We’ve been working with the operator trying to get payments going. That obviously has not happened,” Solaro said.

Bell-Men disputed the county’s figure, and both sides accused the other of not abiding by contractual obligations.

“We dispute that these numbers are not correct that are presented to you as far what is due,” she said. “We also assert that these late fees of $150 per day are unreasonable and unenforceable under the law. The county has reduced the golf course’s irrigation water by 42 percent and reduced the maintenance crew by 50 percent … and this directly interfered with Bell-Men’s ability to fulfill its obligations under the contract.”

Commissioner Kitty Jung asked Bell-Men for an exact amount owed, but Bell-Men’s representatives said that they did not have an accounting with them.

“I went through this when we re-upped (the contract), and that’s explicitly what these operators asked for, was this type of contract,” Jung said. “Nobody compelled them to go into any contract. I get it if you’re saying that it’s not working out.”

Commissioner Marsha Berkbigler stressed that the county is not going to shut down the course.

“It is not the intention of this commission and county to close this golf course,” she said. “(But the money owed) belongs to the people. It’s $600,000 due to the taxpayers of the greater Washoe County. That’s where the concern comes in. I am a little surprised that you guys did not come in with numbers to refute what our staff is saying. I’m a little frustrated to say the least.”

Bell-Men said that they found out about they were on the agenda of today’s meeting through a public notice and did not know they would be asked for information.

“We sent a letter May 2 … to (county) counsel requesting discussions, asserting our issues,” Parker said. “We did not receive a substantive response. I understand some of these fees were disputed. I do think we have some matters that we can work on in the next six months, and I’m hopeful that these issues can be resolved.”

Bell-Men representatives said that the recession, taking over the course’s restaurant, contract changes, drought and course usage contributed to delinquent payments. They said they made more than $3 million in payments in the last five years but that only covered late fees and did not apply to the principal owed.

“As we got behind with the $150 a day late payments, which went on forever no matter how much we paid, all the money we paid was going toward the late payments and not the original debt,” said Barney Bell, Washoe Golf Course’s general manager. “We never wanted to get to this point.”

Solaro admitted that the county has not met some of its obligations.

“We have not done a physical report card review. Staff is deficient along those lines of doing that review in that format,” he said. “I think we’ve done 50 percent of our work.”

Jung added, “It sounds as if there’s some blame to be cast around everywhere.”

Assistant District Attorney Paul Lipparelli noted that he received a letter from Parker’s law firm, but he described it as “6- or 7-page comprehensive treatment of all sorts of legal issues. (We also got a letter) accusing the county of violating the open meeting law and making an extensive public records request.

“The D.A.’s office with county staff had to spend quite a considerable amount of time gathering the hundreds and hundreds of pages of records that were responsive to the public records request and dealing with the open meeting law allegations, which I’ll note, the D.A.’s responses strongly denied any problems with the open meeting law,” he added. “Each of the parties could be accused of failing to live up to the letter of the contract.”

Commissioners approved a motion to extend the current contract for six months at the county’s request and to have staff and the D.A. figure out what is due to work out reimbursement. Staff will also work on a request for proposals (RFP) for “full golf management to include a percentage payment or whatever will work for the benefit of golfers and the citizens of Washoe County,” according to Solaro.

The RFP could open up the course to new management. Sierra Sage, another county-owned course managed by private operators, expressed interest in Washoe Golf Course and has submitted a proposal to manage it.

Numerous Washoe Golf Course supporters spoke in favor of the six month extension and praised Bell-Men’s operators for their service to the Reno area.

“They have continued to pour the blood, sweat and tears into the community,” said one supporter.

“They make the community better,” said another.

1. Large donations made to Washoe County parks. Washoe County Commissioners accepted more than $77,000 in cash donations from various businesses, organizations and individuals for the Regional Parks and Open Space programs and facilities. These donations allow Washoe County to continue to offer great programming at County parks as well as repair, replace and maintain facilities and items that are not supported by budget funds.

“Washoe County Regional Parks and Open Space wants to thank the citizens of Washoe County for continuing to support our local parks,” said Washoe County Community Services Director Dave Solaro. “We encourage everyone to get out this summer and enjoy all the great activities our incredible parks offer.”

“Thank you, Commissioner Lucey, for using your district funds to provide dental care for our veterans. These donations will go toward helping veterans who can’t afford to pay for their own dental bills,” Adopt A Vet Dental Program Founder Linda Haigh said. “Your support is so important to our program. You are a solution to a growing need when it comes to caring for our veterans.”

Commissioner Herman is dedicating $5,000 of that fund to Nevada Lands Council for an annual Government membership fee and to help provide additional resources. She also dedicated $10,000 of the grant to support programs and enhance technology at the Washoe County Senior Centers in District 5.

After a national recruitment, Hastings was unanimously selected by the NCJFCJ Board of Directors to lead the organization. NCJFCJ is a long-standing, national, judicial, membership organization that focuses on child abuse and neglect, domestic violence, family law, juvenile justice, and evidence-based best practices.

“Joey has been a tremendous member of our team, both here at the Office of the County Manager, and at the Second Judicial District Court,” Washoe County Manager John Slaughter said. “I am confident that she will remain an active participant in our Washoe County community at the local, state, and federal level.”

“I have been honored to serve in the Manager’s Office and look forward to what the future holds,” Hastings said.

The Washoe County Examiner’s Office provides services for 14 counties in Nevada and five additional counties in neighboring California, and performs more than 600 autopsies a year. In addition to autopsies, the office conducts external examinations of bodies and medical consultations.

Dr. Clark said the Medical Examiner’s staff works with families to provide closure and helps them get the answers they need. Additionally, staff helps families with the grieving process by delivering memory boxes to anyone suffering from the loss of a child.

“Providing scientifically sound and compassionate death investigations is a community standard, and I think we have made significant progress in the past nine years in achieving that goal,” Dr. Clark said.

The Medical Examiner’s Office will receive a more modern and larger facility to handle the increasing demand Washoe County is seeing with the growing population. Last December Washoe County marked the beginning of an eleven-month construction project to build a new $10.77 million state-of-the-art facility, which will open in December 2016. Read the press release here.

“Thank you, Dr. Clark, to you and your staff for all that you do in helping people deal with the reality of death,” Commission Chair Kitty Jung (Dist. 3) said. “You and your staff are such a calming, respectful influence in our community. Thank you very much for being such a compassionate group of people.”

Get more information about the new ME’s Office.

Additional facts to know about the ME’s Office:

Conducted more than 980 autopsies and medical examinations in 2015
Handles more than 400 cases from outside Washoe County each year
Since 2007, caseload has increased 122 percent
Anticipates nearly 4,100 cases in 2016

Watch a video for more info about the ME’s Office.