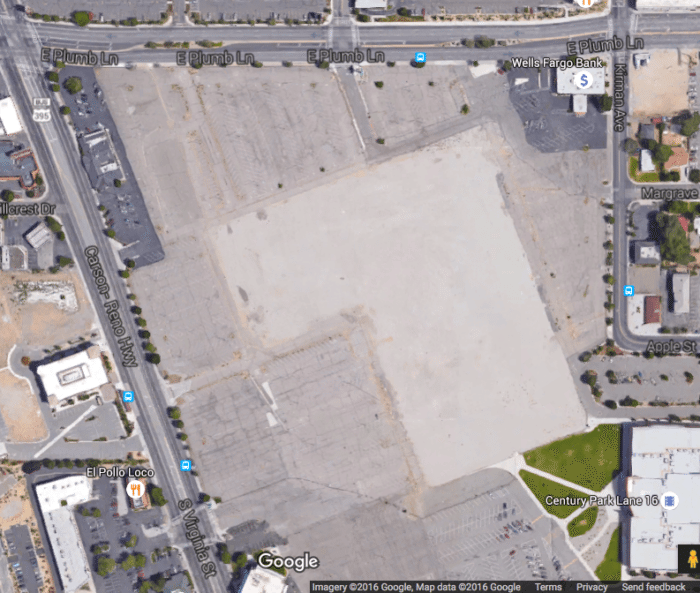 Reno Urban Developers LLC has entered escrow on Reno’s Park Lane Mall property, approximately 45 acres of mostly vacant land that for years has been identified as one of highest-priority redevelopment targets by the City of Reno.

Reno Urban Developers is a real estate company managed by long-time Reno resident Chip Bowlby that invests in Reno and the surrounding area.

The Park Lane Mall buildings were removed in 2009, and since then the majority of the property has remained vacant. It was owned by Bay Area-based real estate developer Merlone Geier (previously referred to as M&H Realty) before an agreement was reach to sell to Reno Urban Developers LLC. The purchase price has not been disclosed.

Reno Urban Developers is still in the early stages of planning for the property, but has preliminary concepts that include for-sale and for-rent housing, professional offices, and medical and retail space.

The initial vision for the property is a Millennial hub for Midtown, creating a place for young professionals to live, work and play within the Virginia Street corridor. The urban, mixed-use project will address Reno’s housing shortage, build a critical mass of retail, office and housing in the heart of Midtown, and solve a long-standing hole in the middle of the city.

“The redevelopment of the Park Lake Mall property has been a top priority for the City of Reno for nearly seven years,” said Reno Mayor Hillary Schieve. “To see a locally managed firm step up with a vision for housing, retail and office space is great news for the city and its residents. The redevelopment of this critical piece of land can make a deep and lasting impact on the core of our city.”

The purchase of Park Lake Mall comes on the heels of an Urban Land Institute presentation, sponsored by the City of Reno, that highlighted the property as one of the key opportunities within the city.

“What we heard from the Urban Land Institute is that Reno is on the cusp of not just being good, but great,” said Chip Bowlby, managing partner of Reno Urban Developers. “The Park Lake Mall property will be a key part of Reno reaching its ultimate potential by redeveloping an integral piece of Midtown, addressing the city’s housing shortage and becoming a hub of successful businesses.”

Chip Bowlby, managing partner of Reno Urban Developers, is also involved in numerous other Reno projects, including the 141-acre Rancharrah project, the Meridian 120 located near Boomtown, projects in the Tahoe Reno Industrial Center and the Summit Club housing project in South Reno.

Want to live at the Reno Experience District? Prices are...

The day they knocked down the Palais (opinion)