School overcrowding prompted yesterday the Washoe County School District’s (WCSD) Board of Trustees to identify four middle and four high schools for possible double sessions in the next five years.

The board voted unanimously to look at “conversion thresholds,” which will determine when schools will be converted to double sessions as a result of overcrowding.

A middle or high school will be converted to double sessions, according to WCSD, if enrollment over three years “is projected to be at or above 120 percent of enrollment capacity (without counting portable units).” 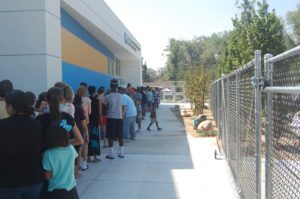 The middle schools are Traner, Depoali, Mendive and Shaw, and the high schools are Damonte, McQueen, North Valleys and Spanish Springs.

A school bond is going in front of voters in November, which will raise county sales taxes in order to fund new schools and building improvements.

“It’s really unfortunate that we have reached this point, but the overcrowding situation in many of our schools is untenable,” said Board President Dr. Angie Taylor. “Our schools are quickly reaching a breaking point where overcrowding is affecting safety and the ability of our students to receive the world-class education they deserve, and that we are committed to providing them.”

WCSD said the last time it used double sessions was when Reed High School was being built 30 years ago.

Two more actions were taken by the trustees to address overcrowding: