Development of City Plaza and Parking Garage Up for Consideration 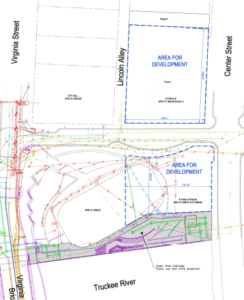 City of Reno staff are recommending that the City Council approve a request for qualifications (RFQ) to explore the development potential of both the city-owned parking garage and the City Plaza across the street.

The plaza, adjacent to the Truckee River, is the future home of the BELIEVE sculpture.

According to a city staff report:

The City and the Redevelopment Agency own approximately two acres consisting of three parcels to the south and east of City Hall.

“Staff has been approached by several developers about the possible development of the subject properties into more (intensive) uses that might improve the financial position of the RDA (i.e. increased property values and tax contributions) and further the Council’s desire to improve downtown.

“If the Council authorizes the City Manager to proceed with the RFQ it does not create a commitment for use of the property. This RFQ would simply allow the City to explore the opportunities that might be available for development of the properties.” 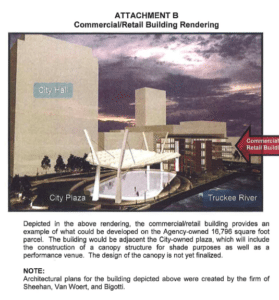 A portion of City Plaza was considered for commercial retail use in 2007, according city records, after the city purchased the former Mapes Hotel site in 1996.

It’s been used since 2004 for the winter ice rink, which was moved in 2014 to the Aces Ballpark because of the Virginia Street bridge construction.

The Cal Neva parking garage was determined to need up to $5 million in improvements when the city purchased it for $10 last summer. The council approved $1 million for improvements to the building.

No development details are proposed yet for either parcel, but the city is requesting certain components be included in potential projects: