At the unveiling of the BELIEVE sculpture last week, Reno Mayor Hillary Schieve spoke about the efforts our city has put forth in the direction of public art spaces. With the permanent addition of the BELIEVE sculpture to the city landscape, Reno is putting down energy and money to bring on a new chapter in its history. BELIEVE’s temporary home is on the public plaza adjacent to the Reno Arch in downtown. After the completion of the Virginia Street Bridge, BELIEVE will be moved to the city plaza. 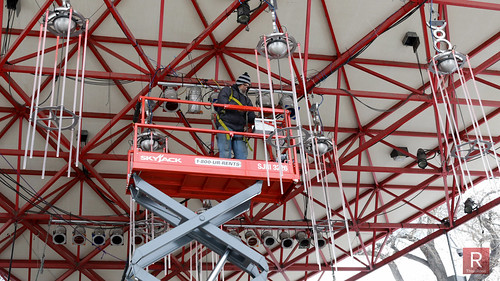 At Wingfield Park, also in the downtown area, you will find “The Light Chimes.” This is the work of local artist Scott Morgan. It consists of six chimes, each with several lighting elements that are controlled by a computer to emit patterns of color. I found this fascinating to watch. The data controlling the patterns come from photos of street murals found around Reno as well as a photo of the Milky Way. The Light Chimes will illuminate Wingfield Park from 4 to 10 pm daily until the Virginia Street bridge reopens, and the BELIEVE sculpture will stay for our enjoyment when we’re downtown.

I am feeling so very energized at the direction Reno is going and I am excited for the future of this city we call home. For more information on Reno Arts and Culture go to their website; http://www.reno.gov/government/departments/parks-recreation-community-services/arts-culture

“Year of the Goat” Group Art Show & One Year Anniversary Party
Lasting Dose Tattoo & Art Collective will open their doors for their 1 year anniversary group art show on Saturday January 9th at 8pm to do just that. There will be food provided by Noble Pie Parlor & Pignic Pub and Patio, beer, and music.
Here is a list of the amazing artist represented.

Here is a link for more information: http://www.lastingdosetattoo.com/

Alchemist Theatre presents: PEACE
January 13 at 7:30
If you have not been to one of their services you are missing out. I say service but it is more than that, part spiritual and part performance. This is a once a month event hosted by Good Luck Macbeth. Here is a link for more information: http://www.alchemistmovement.org/

AFTERBURN OPENING RECEPTION
January 8 @ 6:00 pm – 8:00 pm
An opening reception will be held at Holland Project Micro Gallery on a Friday, January 8th from 6pm-8pm, and the work will be on exhibition between Dec. 31st – Jan. 29th. Here is a link for more information: http://www.hollandreno.org/event/afterburn-opening-reception/

The Nevada Museum of Art
Thursday January 7, 2016 / 5 – 7 pm
This is their first Thursday celebration featuring music, drink, and food in addition to art. This will be one of the last opportunities to see the museum’s exhibit: Tahoe: A Visual History, which closes on the 10th. Here is a link for more information: http://www.nevadaart.org/calendar/2016/01/07/#first-thursday-rocky-judith-friends-jazz-and-latin-standards

PHOTOS: Art Dedicated At Virginia Street Bridge; BELIEVE Gets A...