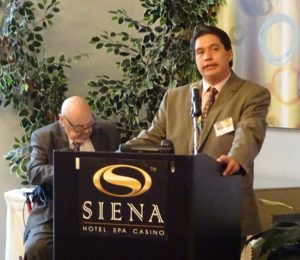 Dignitaries met today at the Siena Hotel in Reno to celebrate the implementation of the agreement, which was signed in 2008 but has been held up in court since, a pattern that has stalled finalizing the agreement for decades.

U.S. Senator Harry Reid, who was scheduled to speak but could not attend because of a flight cancelation in Las Vegas, praised the agreement, calling it “landmark legislation.”

But he had harsh words for the Truckee-Carson Irrigation District, which he blamed for holding up the agreement with what he called vexatious litigation.

More than 20 years and thousands of hours of negotiations have occurred to get the agreement finalized.

Director of the Nevada Department of Conservation and Natural Resources Leo Drozdoff said: “This interstate allocation provides stability and assurances for water systems and the public in both states. The ability to store and transfer Truckee River water, especially in times of drought, is particularly beneficial to the Reno/Sparks metropolitan area.”

Learn more in the video below.