PODCAST: A Preview of The Wolf Pack’s Thursday Season Opener Against UC Davis

Thursday September 3rd is a day that Nevada Wolf Pack football fans have been waiting for since the devastating bowl game lost to Louisiana Lafayette a season ago. A lot of things have changed since last season. Nevada will welcome a new starting quarterback Tyler Stewart into the fold.

The team will welcome four new captains to the team. Senior RB Don Jackson and sophomore LT Austin Corbett will represent the offense. On the defensive side, the captains will be senior DE Lenny Jones and senior LB Jordan Dobrich. 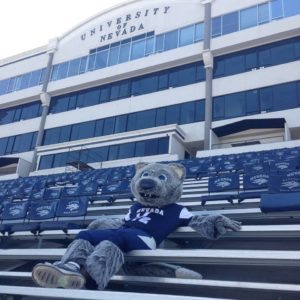 Most importantly the team will kick off the season with new optimism trying to build off its (7-6) record from a year ago. The team’s season will begin Thursday against rival opponent UC Davis.

UC Davis is a very common opponent for Nevada. Nevada and UC Davis have played 53 times (the most common opponent in Wolf Pack history). Nevada has a 29-21-3 lead in the all-time series. With Nevada winning the last match up in 2013.

UC Davis comes in trying to improve upon their (2-9) record from a year ago. UC Davis style of play is predicated off of a strong run game. So Nevada will see a lot of two tight end sets along with a heavy dose of a fullback their as vintage on offense as vintage can get.

56% of UC Davis’s 26-ppg average a year ago came from the run. The team’s Achilles heel is their defense, which allowed 37.8 ppg last season. So if their was any game for new Nevada quarterback Tyler Stewart to get his confidence up this would be the game to have a great performance.

Like UC Davis Nevada wants to establish an effective run game with Senior Don Jackson who was named to the Doak Walker preseason watch list after a 957 yard season of a year ago. Sophomore James Butler comes into the season highly touted as well. So Nevada has a very effective two headed rushing attack.

The game most definitely will be won in the trenches as both teams have solid front lines that will give each other headaches going forward. As what will happen in the game we shall soon see.

Overall, Thursdays game will play a huge part of setting a benchmark of what the team can be for the up incoming season. It’s important Nevada starts off with a confidence booster at home against a rivaled foe.

To see the up incoming game, fans have two options either show up full force at Mackay Stadium at 7 p.m., or fans can watch the game online on the Mountain West Network, powered by Campus Insiders.

Either way it’s a game you certainly don’t want to miss.