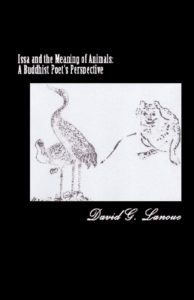 David G. Lanoue, a leading authority on haiku poetry, presents his newest book, Issa and the Meaning of Animals: A Buddhist Poet’s Perspective on Friday, November 14, 6:30 p.m., at Sundance Books and Music, 121 California Avenue, in Reno.

The poetry of Kobayashi Issa (1763-1828) coaxes readers toward an insight sorely needed in our time: animals are like people and deserve our care and compassion.

They can also, according to the Pure Land Buddhism to which Issa subscribed, attain enlightenment in a future life. Recognizing animals, as Issa does, as fellow travelers in a shared world is a first step toward their ethical treatment.

In the late 1700s, English-language writers began a long tradition of poems about animals, addressed to animals, even attributing speech to animals. In his new work, David Lanoue shows that the Japanese haiku-poet Issa, working at the same time, did this and more, all with immense ingenuity and sensitivity to other beings. It is a major contribution to our understanding of animals in literature,” says Professor David Fraser, of the Animal Welfare Program, at the University of British Columbia.

David G. Lanoue is a professor of English at Xavier University of Louisiana and the author of several “haiku novels,” including Haiku Guy, Laughing Buddha, and Dewdrop World, among others. He has also translated several works by Issa, a Japanese poet and lay Buddhist priest of the Jodo Shin sect and is considered one of the four leading haiku masters in Japanese history.

This event is made possible in partnership with Nevada Humanities and with the support of the Nightingale Family Foundation.