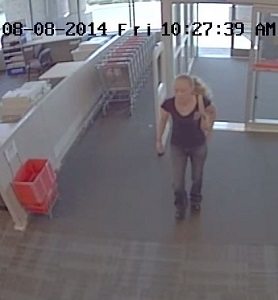 On September 8, 2014 shortly before 10 am a vehicle burglary occurred in the parking lot of the 24 Hour Fitness at 6155 Neil Road in South Reno. Shortly after the vehicle was burglarized, the victim’s credit card was used at a business in the 4800 block of Kietzke Lane also in South Reno.

Reno Police Detectives reviewed the security surveillance from the business on Kietzke Lane and were able to determine one of the suspects in the case is a white female. She is described as a white female in her 20’s, medium height with a thin build. She has blonde hair which is in a ponytail and hangs just below her shoulder blades. She was last seen wearing a dark blue short sleeved t-shirt with an unknown insignia on the left breast, blue jeans and black tennis shoes. Detectives are also looking for a gold colored Ford Explorer that was also seen in the area during the vehicle burglary.

The Reno Police Department wants to remind drivers to not leave valuables such as wallets and purses in plain sight inside their vehicles. If you have to leave valuables in your vehicle, secure them under a seat or in a storage area inside the vehicle and not in plain view.