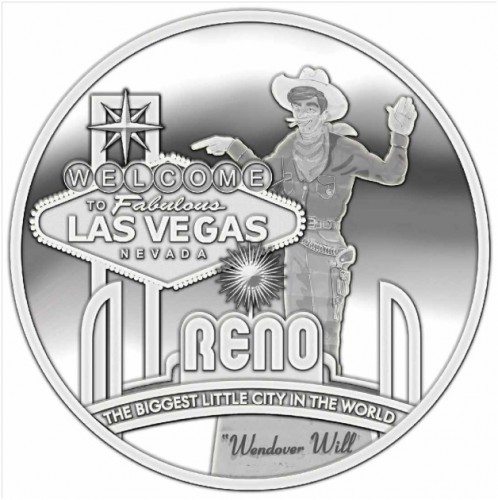 CARSON CITY —  The Nevada 150 Commission unveiled the the design of the third medallion in the Sesquicentennial series of four, as chosen by Nevada elementary students.  The winning design features some of the State’s most iconic landmarks including the “Welcome to Fabulous Las Vegas” sign, the Reno Arch and Wendover Will.

Last month, Lieutenant Governor and Nevada 150 Chairman Brian Krolicki invited Nevada students to participate in choosing the design for the third of four medallions in the Sesquicentennial series being produced throughout the year.  Over 200 classes participated in the contest, receiving close to 5,000 total votes.

Orders for the Sesquicentennial medallions can be made through the Legislative Gift Shop (LGS) website by visiting www.nevadalegislature.com and clicking on **NEW ITEMS** under the gift shop button, or in person at the LGS, 401 South Carson St., Carson City.  Wells Fargo is the official sponsor of the commemorative medallions.

Each location featured on the medallion has its own significance to the state of Nevada: