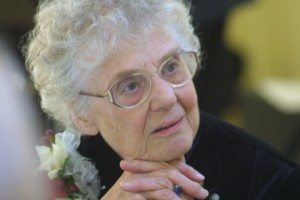 NEVADA WOMEN’S FUND NEWS RELEASE – The Nevada Women’s Fund (NWF) has announced Elizabeth Lenz as their 2013 Hall of Fame inductee. Lenz will receive this honor at the Annual Salute to Women of Achievement Event, scheduled for May 30 at John Ascuaga’s Nugget. Lenz served on the Washoe County School District Board for fourteen years from 1966 to 1980. Lenz was also a founder of Young Audiences, a group who brought musical performances to the area schools.

Lenz has won numerous awards over the years including Nevada Mother of the Year in 1974 and the SIR (Skill – Integrity – Responsibility) award in 1980. She has been active in her church, in all organizations supporting music and has worked for many years with the “Doctors’ Wives” association.

The Annual Salute to Women of Achievement Event is NWF’s signature event that honors women in the region for their professional, personal and community achievements. Honorees participate in a day of professional development activities and a recognition luncheon honoring them. For more information about the Salute to Women of Achievement Luncheon visit nevadawomensfund.org, or call 775-786-2335.

Established in 1982 the Nevada Women’s Fund (NWF) has been supporting women and families through the allocation of individual scholarships to help northern Nevada women increase their chances for a self-sufficient future. The NWF works to identify the issues that affect Nevada’s women and families and facilitate solutions through the allocation of grants to other community organizations that share the Fund’s mission to strengthen and empower the community.