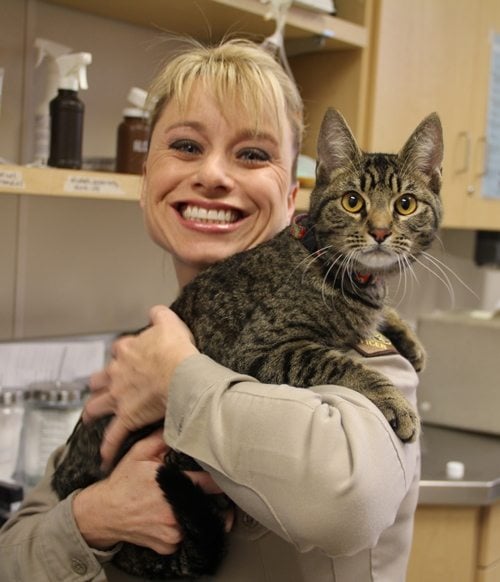 A two-year-old brown tabby was safely rescued from its precarious perch on a freeway median during the height of yesterday’s rush hour traffic thanks to a cooperative effort between the Washoe County Sheriff’s Office Regional Animal Services and the Nevada Highway Patrol.

Dispatch centers at both agencies started receiving calls just as the evening rush hour was getting underway yesterday, reporting a cat sitting on the cement median dividing the north and south bound lanes of U.S. 395 in the area of Mill Street.

“Cats can be difficult to catch under any circumstances,” Mittelstaedt said. “In this case I was really concerned about spooking the cat and causing it to dart out into traffic.”

Mittelstaedt climbed over the median and approached from the southbound side of the freeway so if the cat did run, it would run onto the side already shut down by the Highway Patrol.

“As it was, she was a very easy catch,” Mittelstaedt said. “I approached from behind and was able to snare the cat and then get it quickly and safely to the truck.”

Mittelstaedt transported the cat to Regional Animal Services for examination. The cat is reported to be in “remarkably good” condition considering its ordeal.

“In fact, she is a very friendly cat,” Mittelstaedt said. “Even after all she’d been through, she kept purring and rubbing and asking for attention. She is friendlier than many cats I’ve seen who have been through much less.”

The cat was not micro-chipped and has no identification. She will remain with Regional Animal Services until Tuesday, Feb. 21, and then be available for adoption through a local rescue group.

NHP escorts Canada geese off I-580