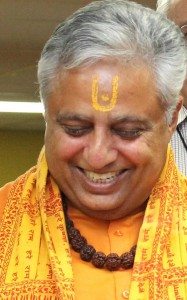 Religious statesman Rajan Zed has stressed the urgent need for a slum-free India.

Zed, who is President of Universal Society of Hinduism, in a statement in Nevada (USA) today, said that slums were blight on India which prided herself on having joined the league of hottest growth economies. Urban population in India had been increasing tremendously and the country had not been able to do much for improving the deteriorating living conditions of urban poor despite announcement of various “high-sounding” development schemes.
Rajan Zed warned that India should wake up to the magnitude of the emergency of urban poverty, which was a monumental crisis and should be dealt at an emergency level. Slum-free India was an achievable task. It just needed a strong political and social will, positive approach, innovative plans, efficient delivery system/practices and transparency to deliver social housing, which was urgently needed. Make it a policy priority; treat it as a crisis, he added.
Besides central, state and city governments in India; billionaires/millionaires who had enormously benefitted from India’s economic growth, religious groups, charities, local communities, and private sector should also take responsibility in improving the situation of urban poor, as every human being should have a dignified life. All citizens of India should have access to basic shelter, food and clothing, medical facilities, potable water, energy sources, sanitation, literacy and civic/social amenities, Zed argued.
Rajan Zed further said that although India was on track to become a global power, but her new prosperity had remained evasive for many. Despite economic miracle, many Indians still lived in desperate poverty and without shelter.
India had failed to deliver on this front and it was a dismal situation. Implementation benchmarks needed to be set-up and passionately followed, Zed pointed out.