by Sean Whaley, Nevada News Bureau: A contractors representative told the state Transportation Board today that officials missed out on opportunities to increase road funding in the 2011 legislative session, and that failing to act promptly on the issue could cost Northern Nevada a competitive bid for the 2022 Winter Olympics.

John Madole, executive director of the Nevada Chapter of the Associated General Contractors, said that while a number of bills introduced last session, “would have addressed highway funding and other infrastructure investment that would have begun restoring our state’s economic health, none were processed out of an apparent fear of ‘political incorrectness’ and concern of endangering the political careers of elected officials that must stand for re-election.”

Madole, who noted that Nevada’s gas tax has not been increased since the early 1990s, asked the board to “take the lead in immediately planning for the future needs of our state, helping restore the economic growth that will return Nevadans to work.”

The Nevada Legislature would have to act to increase the state gas tax rate. 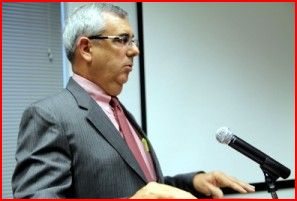 Rather than find a way to increase investment in transportation, the 2011 session actually took a step backwards, diverting $52 million in highway funds over the coming two years to the operation of the Department of Motor Vehicles and “putting another 1,500 Nevadans, who would have been employed on highway projects out of work,” he said.

Nevada has the highest unemployment in the construction industry among the 50 states, with over 90,000 construction workers losing their jobs since 2006, he said.

Madole said Assembly Bill 152 from the 2011 session proposed to establish a group of citizens to address the state’s long term transportation needs in Nevada and place an advisory issue before the voters in November 2012.

Sandoval vetoed the bill however, indicating in his veto message suggested that the long range planning for highway funding in Nevada more appropriately belonged to the Transportation Board. He called the panel “unnecessary and redundant.”

In an interview after delivering his statement, Madole said time is of the essence if the state is going to bid on the Winter Olympics.

“If we’re going to do something about these Olympics, or anything else, we need to get moving,” he said. “The presentation I heard said they might quadruple the air traffic out of Vegas where people are staying in Vegas, flying up here for the Olympics. They are going to get on Interstate 580 and head straight to the Spaghetti Bowl and probably wait 30 minutes to get through it.”

Sandoval, who has directed the state Department of Transportation to look at the infrastructure implications of an Olympic bid, said Nevada is doing all it can to ensure it gets every road dollar available.

“I think we are all eager to obtain whatever type of funding that is available,” he said. “I think you heard during the course of the meeting that the director is actively engaged at a federal level to ensure the state of Nevada gets all the funding that it is entitled to.”

Sandoval said the agency is also increasing by 50 percent the amount of maintenance projects that will go to the private sector.

“So I think the construction community should be very pleased about that,” he said.

The state gas tax will be the subject of a discussion at a future board meeting, Sandoval said.

He acknowledged that Nevada has to get moving for a successful Olympics bid.

“If we’re going to have an adequate bid we have to be well out in front of this and I think that process has started,” Sandoval said.

John Madole of the Nevada Chapter of the Associated General Contractors says the state needs to get moving to have a solid bid for the 2022 Winter Olympics:

Madole says without road improvements, visitors to the Olympics could find gridlock:

Gov. Brian Sandoval says the Transportation Department is doing all it can to get its share of federal funding:

Sandoval says Nevada is moving forward on an Olympics bid: