By Sean Whaley, Nevada News Bureau: The debate over Gov. Brian Sandoval’s proposed cuts to public education shifted to the state Senate today, with members of the upper house getting the details of the reductions that the Clark County schools chief said would mean the loss of $400 million for a 19 percent cut in funding.

But there was no effort by Democrats, who control the Senate with a narrow 11-10 advantage, to force a vote on the schools budget as occurred yesterday in a more contentious Assembly hearing. There were no fireworks either.

The Senate heard from a number of school officials talking about the effects of the cuts proposed in Sandoval’s budget, as well as a defense of the plan from Chief of Staff Heidi Gansert and Budget Director Andrew Clinger. 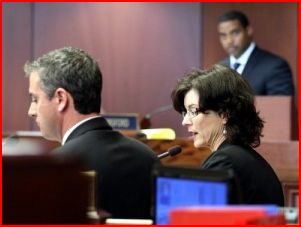 Clark schools chief Dwight Jones said that if the teachers union does not agree to benefit concessions the district is looking at layoffs of 2,500 to 3,000 employees. Class sizes would also likely increase, by three students in elementary grades and two students in the secondary grades, he said. The textbook and supplies budget would likely see a 50 percent cut as well.

Jones acknowledged, however, that the tough economic conditions facing the state have proved to be an impetus to make reforms to the delivery of education in the district.

Gansert reiterated the Sandoval position that new taxes are not an option for the upcoming two-year budget because of the need to let the economy recover and for Nevada businesses to begin adding jobs.

She noted that the most recent unemployment report for March showed job growth for the first time in 37 months.

Gansert also defended the use of more than $300 million in school district bond reserve funds to fund operating costs for schools, a controversial element of Sandoval’s spending plan for public education. The proposal was put forward to avoid even more severe cuts to public education, she said.

Senate Majority Leader Steven Horsford, D-Las Vegas, started the proceedings for the Committee of the Whole by saying bringing the details of the public education budget to the full Senate is critical to reaching a compromise on spending. He rejected a suggestion that the hearings are a “farce.” 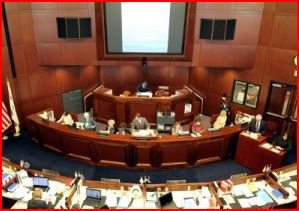 “Some in the Legislature have characterized these Committee of the Whole proceedings as a dog and pony show or a farce intended to politically embarrass members of this body,” he said. “Nothing could be further from the truth. The Committee of the Whole in the Senate is about serious business of the state of Nevada that must be resolved.”

Horsford said he cannot accept the education cuts proposed in Sandoval’s two-year, $5.8 billion general fund budget, and that he is willing to compromise. There is no question that any budget approved by the Legislature will include severe cuts to all areas of spending, he said.

“I am prepared to stay here as long as it takes, but I would prefer that we meet our constitutional deadline of passing a budget by June 6,” Horsford said. “That means we must begin working together now to find the common ground and compromises that will allow that to happen.”

In a briefing after the administration presentation, Gansert and Dale Erquiaga, senior adviser to Sandoval, reiterated the governor’s positions on the education budget and taxes.

“We were very careful in putting this budget together, we believe it is sound and it is reasonable,” Gansert said. “We made extra efforts to mitigate the cuts or make them as small as possible to education because that is a priority of the governor’s.”

Erquiaga said that while the administration is interested in reforms sought by Assembly Republicans in such areas as collective bargaining and the prevailing wage, that those issues must be considered on their own merits.

The actual level of funding remains a point of contention between Democrats in the Legislature and the Sandoval administration. Democrats say some elements of the proposal are budget cuts, with the governor’s staff disagreeing with the characterization.

The Senate hearing was more subdued that the marathon session in the Assembly that lasted more than six hours Tuesday. The Assembly session deteriorated later in the evening with accusations and complaints levied by members of the lower house at each other.

In the end, Republicans and Democrats remained firmly entrenched in their positions, with the 16 GOP members supporting Sandoval’s budget recommendations and the 26 Democrats seeking some compromise that would require some form of as yet unidentified tax increase.

The Legislature is scheduled to adjourn on June 6.

Horsford says he will stay in Carson City as long as it takes to find compromise on public school funding:

Sandoval Chief of Staff Heidi Gansert says every effort was made to minimize cuts to public education;

Sandoval Senior Adviser Dale Erquiaga says a discussion of reforms is welcome, but not as a trade off for tax hikes: