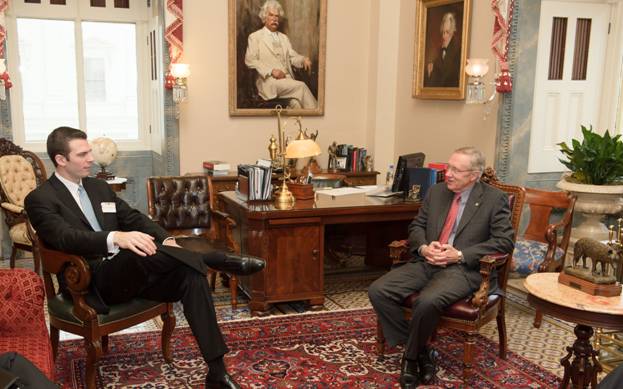 “It’s a privilege to welcome Reno native and 2003 Nevada Player of the Year David Padgett to Washington,” said Reid. “I’ve followed David from his All-American days at Reno High to his professional career in Spain for two seasons. I’m proud of all that David has accomplished and I have no doubt that he’ll find success in the next phase of his basketball career as a coach.”

Padgett played two seasons of professional basketball in the Spanish Basketball League for the Canary Islands. His roots trace back to Reno, where he was named Nevada Player of the Year in 2003 and was a Parade Magazine and McDonald’s All-American at Reno High. At the University of Louisville he was starter for three seasons and, as a captain, was a team leader. He now serves as the assistant strength coach at his alma mater. Reid met with Padgett as the Louisville Cardinals were in Washington, D.C. for a matchup with Georgetown.