There is quite a lot in the financial press these days about whether our government should be piling up more debt or cutting expenses. It’s all politically motivated, and therefore as a matter of economics, is safe to ignore. This chart showing congressional spending demonstrates why. 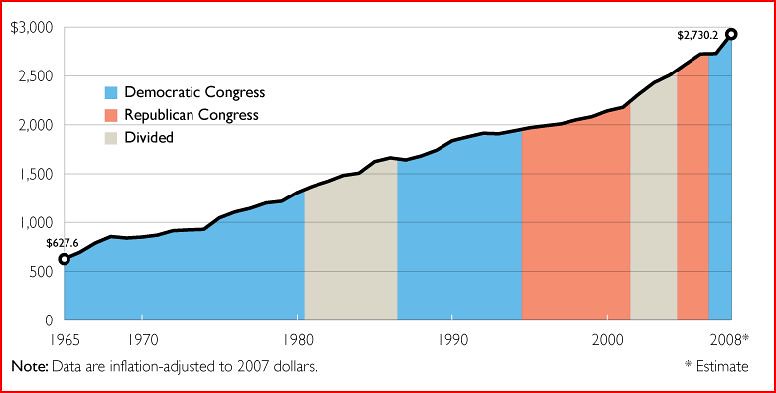 One would not be going out on a limb to say no matter who wins in November, our congress will be spending more in the future.

Of greater importance is the inflation/deflation debate. It’s a near certainty that we are about to get a massive dose of one or the other. The debate is about which one it will be. There are good arguments on both sides, but both often suffer from the same problem; archaic definitions of money. From the Free Dictionary website (italics mine):

Inflation…an increase in available currency and credit beyond the proportion of available goods and services.

Deflation…a persistent increase in the purchasing power of money because of a reduction in available currency and credit.

Both terms assume that currency and credit are two different things; a condition that has not been true since June 24, 1968, the last day a Silver Certificate was redeemable in coin or bullion. From then on, the Federal Reserve Note currency has only been a form of credit. 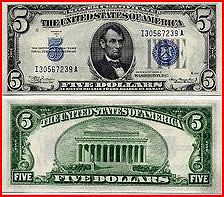 As world currency’s become increasingly cheaper due to globalization‘s emphasis on exports, and sovereign debt obligations turn into a Keynesian nightmare, the current system of “faith based currencies” appears to be reaching its final solution. A global standard, if not a global currency, is the next logical step. With gold prices too high for practical everyday use, a silver standard would make more sense.

At today’s prices, a $5 silver coin would be roughly the size of a quarter. Silver Certificates could be reissued and redeemable at any bank. With a stable price for the dollar, the U.S. just might remain the world’s currency of last resort.