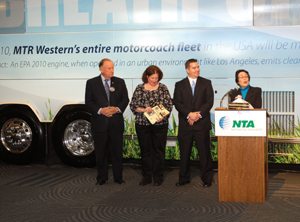 The 2009 event marks the second time NTA has hosted its annual conference in Reno Tahoe. The group was last here in 1985.

The NTA estimates the local direct economic impact of this conference is approximately $2.9 million.

It is the WRTA’s first time in the destination. The group estimates that more than 400 members will participate in the 2009 Expo and Educational Conference.

Approximately one out of every six visitors to Washoe County comes for a meeting, convention or tradeshow, according to the RSCVA’s most recent Visitor Profile Study. Annually, meeting and convention groups economically benefit the Reno Tahoe community by spending millions of dollars locally on accommodations, dining, entertainment, gaming, retail, transportation and other items.