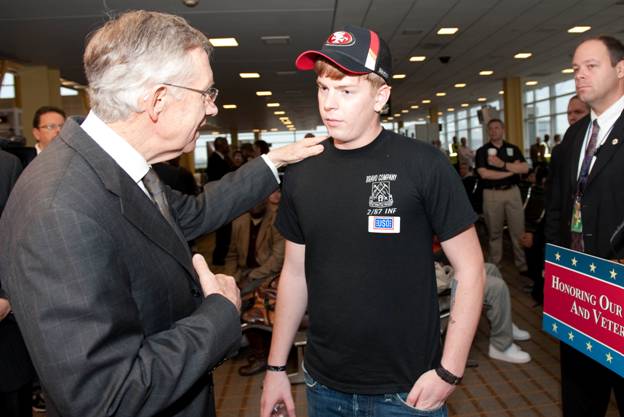 WASHINGTON, D.C.—Sen. Harry Reid honored America’s wounded warriors today in a send-off reception for service members who are flying to Las Vegas for a special weekend of relaxation in recognition of their sacrifice and service to our country.

The Tribute to the Troops–Wounded Warriors Charter Flight is being hosted by American Airlines, the Blue Man Group, the Sands Foundation and ThanksUSA. Reid, who was joined by Senate Chaplain, Admiral Barry Black, saw the troops off at National Airport, thanking them for their service and wishing them an enjoyable trip in Las Vegas. Below are Reid’s remarks as prepared: 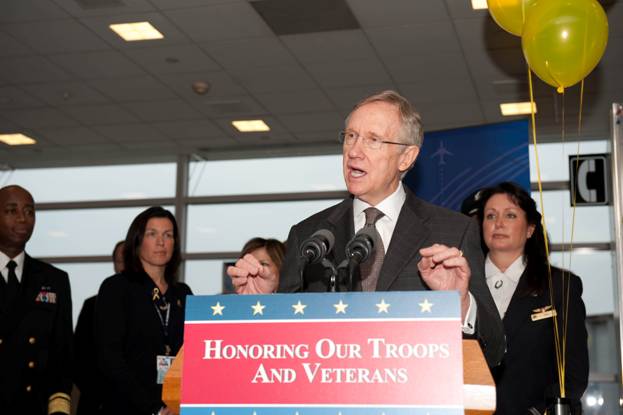 “Today’s date has since been set aside to honor all who have fought under our flag. We are grateful for those who stood up to start a country and then to save it–who fought on the other side of the Atlantic and the Pacific–in the jungles of Vietnam and along the parallels of Korea–in countries around the world and here at home.

“We see new bravery and renewed patriotism every day in the hot deserts of Iraq and the cold mountains of Afghanistan. And we breathe a sigh of heartfelt relief every time a soldier, sailor, airman, Marine or Coast Guardsman returns home safely–every time he or she earns the honored title of the American veteran.

“Veterans Day was born in an official sense from that historic moment in Europe nearly a century ago. But in truth, we honor and thank you every hour of every day of every month of the year.

“We honor and thank you each day because each day we enjoy the freedoms for which you and all of our 26 million veterans have fought. This week, the entertainment capital of the world invites you to enjoy them, too.

“I am so pleased that you will be spending time in my state of Nevada for some well-deserved ‘R & R.’  Las Vegas will welcome you with open arms, and with sincere gratitude for your service. Enjoy your time there.

“I am also honored to introduce the admirable Admiral Barry Black.  He is a man of notable accomplishments and historic achievements–and as the first military chaplain to serve as the Chaplain of the United States Senate, he represents the Armed Services with honor in the United States Capitol.”