Details on the ‘Save Reno 911’ Campaign 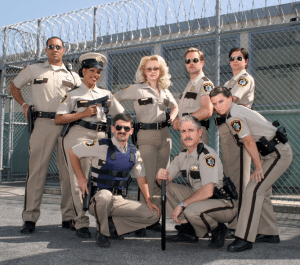 On the heels of actor/writer Thomas Lennon’s (aka Officer Jim Dangle’s) Twitter post announcing the cancellation of Reno 911! , an unlikely thing occurred.

The city that was simultaneously made famous, and relentlessly shamed, by the tongue-in-cheek, mockumentary-style sitcom launched a veritable fan Web site, SaveRENO911.com, which went live on Friday, less than 24 hours after Lennon’s loaded tweet.

The show has a loyal legion of devoted viewers. The site features a petition to save the show, a community billboard and links to related Twitter and Facebook pages.

“One thing Reno has is a sense of humor,” says Ellen Oppenheim, president and CEO of the Reno-Sparks Convention and Visitors Authority.  “We hope the petition results in the show getting picked up by another network, and that they film the show here instead of the non-descript valleys of southern California.”

The support is ironic considering Reno 911! has not always been kind to its namesake: Reno is portrayed as a depraved cityscape with an ensemble cast of vagrants and weirdos pushing the limits of the Nevada State law book.

“We’ve taken more than a few punches from the show, and we think it’s time for the producers to visit the real, offbeat Reno to see what fun they’ve been missing out on,” Oppenheim said.