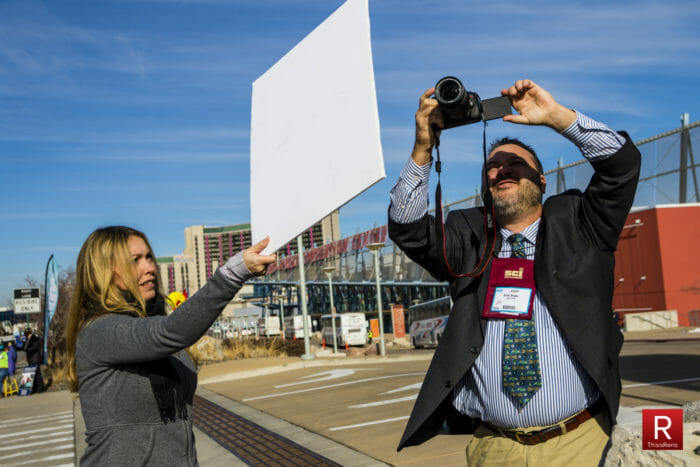 This article is subscriber content and will be public for two days before being available only to subscribers. Join here to support local journalism and gain full access to ThisisReno.

A line of protesters formed on the sidewalk along South Virginia Street Saturday to protest the Safari Club International convention at the Reno-Sparks Convention Center.

The protest was organized by Worldwide Rally Against Trophy Hunting (WRATH), an animal rights group.

Interactions between SCI attendees and protestors were few and far between. Most encounters amounted to little more than an uncomfortable passing glance.

One interaction, though, was more heated. A protest organizer, Carrie LeBlanc, and SCI staff member, Scott Mayer, exchanged words as Mayer attempted to take pictures of the protestors. LeBlanc tried to block his camera with her sign.

Protesters remained on the sidewalk holding their signs. One protestor with a small speaker and mic referred to some of the larger vehicles entering the event as “VIP killing wagons” or “murder busses.”

The protestors also purchased a billboard just north of the event decrying what they called trophy hunting.

SCI’s mission is to protect hunting rights and promote conservation.

“SCI Foundation ensures that the best available science is used in wildlife policy and management, and demonstrates the constructive role that hunting and hunters play in the conservation of biodiversity around the world,” according to the organization’s website.

The animal rights group, WRATH, said that its goal is “to raise awareness about international and domestic trophy hunting and to make a stand for the hunters’ helpless victims.”