Chronic absenteeism: Are half our students really missing from school each day? 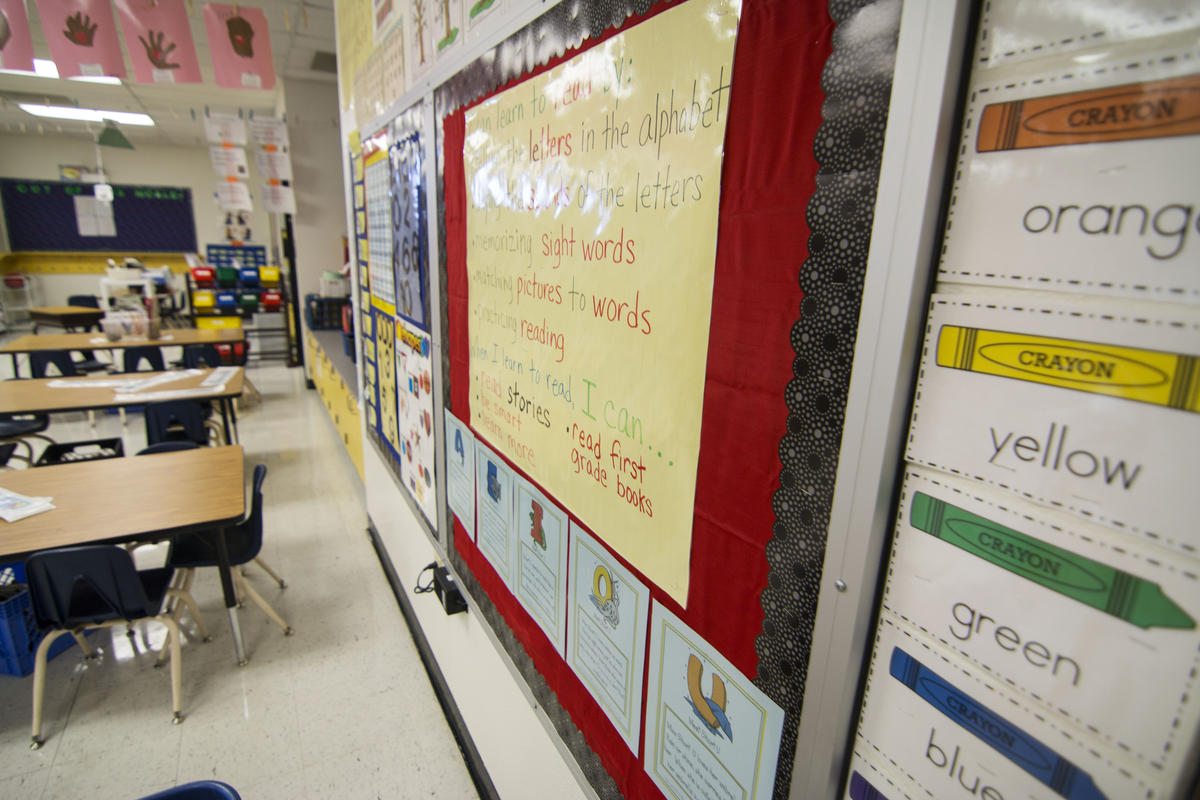 In late November, Joey Gilbert went before the Washoe County School District Board of Trustees in his bid for the open District E seat and said that “on any given day 40-50% of our kids are missing – they’re not at school.” That same figure was used as part of his policy platform in his unsuccessful run for governor.

People providing public comment at Board of Trustees meetings have repeated statements similar to Gilbert’s as they complained about the district during their three minutes at the podium.

Trustee Jeff Church is also on the chronic absenteeism bandwagon, calling the district’s rate “off the charts.” His personal website, WatchdogJeff.com, cites WCSD’s chronic absenteeism rates as ranging from 31-37% and one of the ways “WCSD is failing in education.”

In an opinion published Nov. 22 in the Reno Gazette Journal (that This Is Reno refused to run because the assertions made by Church were false or could not be substantiated), Church questions how 86% of Sparks High School students can graduate when 48% of students are chronically absent.

“I’m no math wizard, but that means about half of our kids are chronically absent. Do they mail them the graduation diploma?” he asked.

Based on Gilbert’s and Church’s “the sky is falling” presentation of the data, it would seem that schools are missing one-third to nearly half of students on a daily basis.

“Chronic absenteeism is a measure of the total number of days that a student has missed in a given school year. Average daily attendance is what does attendance look like on a given day for the district or for a school,” Taylor said.

Chronic absenteeism is defined as the percentage of students who miss 10% or more of enrolled school days per year without a valid excuse. Nevada’s legislature in 2021 passed Senate Bill 249 to further hone this measure so that absences excused by a medical professional – such as a physician’s note that a student must quarantine at home due to illness – cannot count against a school’s chronic absenteeism rate.

What does count toward chronic absenteeism? Absences when a student stays home sick and doesn’t have a doctor’s note, those made for a family vacation or other domestic reason, or when a parent doesn’t call to report the absence are all counted toward this chronic rate.

Washoe schools have 180 days of instruction, so a student who misses 18 days of class per school year is considered chronically absent. With 11 months of classes, that totals out to as few as two days of absence per month for nine months of the school year.

Daily attendance – butts in seats in the classroom – is averaging around 90% this school year, according to Taylor. It can dip around holiday weekends and before and after school breaks as families travel, he added, but overall it’s fairly consistent.

Washoe’s data not as dire as portrayed

Nevada Department of Education (NDOE) has an online accountability portal that provides data on a variety of metrics for each school district, each individual school and a statewide average. This Nevada Report Card includes figures for the chronic absenteeism rate and average daily attendance.

Average daily attendance for this purpose is measured for the first 100 days of instruction – from the first day of school through about the first week of February each year. For the 2021-2022 school year WCSD came in at 93.4%, above the state average of 91.3%.

In the past five school years, the district has exceeded the state average for three of those years, and only fell more than a percentage point behind during the 2020-2021 pandemic school year.

District Attendance Coordinator Taylor said daily absences increased during some of the district’s transportation blackouts and rotating schedules — however, pre-arranged distance learning kept that to about a 2-3% increase.

Some schools actually had more kids attend school during the transportation blackouts, he added.

“We did have some schools where they put intervention plans into place to try to help parents and families that actually saw an increase in attendance during the blackout weeks because they had things like before school [activities], intramural programs and things going where the parents could drop off the kids early,” he said.

However, 75 of the district’s 112 schools – about two-thirds – had chronic absenteeism rates below the district average. More than a dozen schools outperformed the district’s pre-pandemic average.

Taylor said it will take some time for the district to get back down to pre-pandemic rates on the chronic absenteeism measure. NDOE has suggested districts work to reduce the rate by 3-5 percentage points each school year, and Taylor said WCSD agreed with that goal.

The district is on track for about a three percentage point decline this year. If it keeps that pace, the chronic absenteeism rate could be back to pre-pandemic levels within the next five years.

The challenge right now, he said, is helping students to transition back to classroom instruction and school routines following the pandemic.

“I think a lot of it still can be attributed to the fact that we had the pandemic and a lot of students fell into patterns of attendance, behaviors that maybe aren't so desirable,” Taylor said. “It's very difficult to come back from a bad pattern of attendance.”

Taylor added that the return to classrooms was more challenging for some students.

“Students that were eighth graders at the beginning of the pandemic, then had to come back as sophomores having never been a freshman in a traditional high school. That's a tough transition,” he said. “The same is true for students that were sophomores and juniors during the pandemic year that maybe fell behind on their credits and became credit deficient. It's very difficult for somebody that's a senior now that has realized that they became credit deficient during the pandemic to be able to successfully transition back and come back as a full time in-person student.”

Why is chronic absenteeism an important metric?

Taylor said one of the reasons chronic absenteeism gets so much focus is that it’s a good predictor of academic success, a concept backed up by the American Federation of Teachers (AFT).

“There's lots of research that shows that when students are chronically absent, they are at a higher risk for falling behind in their courses, for course failure in high school, or for things like retention in earlier grades,” Taylor said.

AFT lists a number of reasons that students may become chronically absent from school including unsafe school conditions, bullying, housing instability, substance abuse or delinquency. Students of color, those who are low-income, have disabilities or are juvenile offenders are also more likely to be chronically absent.

In Washoe County, the highest rates of chronic absenteeism are among students of color, English language learners, those who have IEPs (individualized education plans) or who receive free or reduced lunch.

The Brookings Institution also suggests that chronic absenteeism could be the result, not the cause, of poor academic performance. Students may choose to miss school because they are struggling in the classroom and already feel academically behind. A lack of sleep – which can be caused by many factors in a student’s life – can also be a contributing factor to both poor academic performance and chronic absenteeism, Brookings experts added.

Taylor said the district has systems in place to help catch students before their absences begin piling up, generally when they hit 7-9% of school days missed. The district’s attendance team created an intervention toolkit for schools to use in addressing chronic absenteeism. “It's kind of our core bank of most commonly successful interventions with students,” Taylor said.

Schools also have MTSS teams, short for multi-tiered system of supports. These teams are focused on student success including preventing unnecessary academic or behavioral failures. They’ll monitor things like attendance then design intervention plans for individual students to help get them back on track.

“If we can catch those students before they become chronically absent and design intervention plans for them and figure out what is the core reason why they are missing school…Is it something that's within our locus of control? Some things aren't, but many things are…It leads to much greater chance for successful intervention and then academic success for those students,” Taylor said.

Often, he said, referrals to programs inside and outside the district can help students and their families overcome difficulties that are keeping students from attending school regularly. Family resource centers in some schools, such as the new one at Hug High School where chronic absenteeism was more than 62% last year, are a key to getting students connected to the assistance they need.

The district in early November launched online tutoring for students as well, providing 24/7 access to one-on-one instructional support for students in grades six through 12. The resource is part of the district’s effort to support students with post-pandemic academic recovery. Joe Ernst, the district’s chief accountability officer, called it a “game-changer.”

The district’s attendance office has also been modernizing its systems and working to improve communication with families.

“We just implemented a whole new system where families are able to request absences online through the Infinite Campus parent portal or through the website instead of having to call and leave a voicemail and wait for somebody to call them back,” Taylor said. “From a student safety perspective we feel like it's making a big difference in terms of knowing where students are and what's happening with students.”

Kristen Hackbarth
Kristen Hackbarth is a freelance editor and communications professional with more than 20 years’ experience working in marketing, public relations and communications in northern Nevada. Kristen graduated from the University of Nevada, Reno with a degree in photography and minor in journalism and has a Master of Science in Management and Leadership. She also serves as director of communications for Nevada Cancer Coalition, a statewide nonprofit. Though she now lives in Atlanta, she is a Nevadan for life and uses her three-hour time advantage to get a jump on the morning’s news.