By Nick McCabe May 3, 2021
Freddy Powers and his wife Catherine shortly after they were married. Image: Courtesy Catherine Powers

Freddy Powers left a huge footprint on the world of country music, spending a lifetime performing on stages and writing songs. A couple of his most noteworthy partnerships were writing and playing with both Merle Haggard and Willie Nelson. Freddy spent a lot of time performing in Reno during the 60’s and 70’s, even earning the award for Best Lounge Act in Reno in 1978.

Despite this, not many people outside of country music know of him, but that’s likely about to change.

Freddy passed away at the age of 83, in 2016, after a long battle with Parkinson’s Disease. Now, five years after his death, his widow Catherine Powers and co-writer Jake Brown have written a soon-to-be-released memoir of Freddy’s life titled, “The Spree of ’83: The Life and Times of Freddy Powers.”

A dream gig in Reno

After years on the road, in the mid-1970s, Freddy and his band finally landed a dream gig at the Eldorado Hotel and Casino in Reno. Freddy became the Entertainment Director and did a show combining comedy and Dixieland jazz with his band there six nights a week.

He was also dubbed the Swinging Ambassador of Good Will. Freddy lived on top of the hotel in a suite provided by the Eldorado, and the party wound up there almost every night. As the story goes, it was always packed. He was right on the back side of the banks of the Truckee River, had a hot tub in his room, and there would always be a bunch of girls up there having a hot tub party.

Freddy had a wicked sense of humor.

“One slow night at Harvey’s Casino playing opposite the DeCastro Sisters the place was completely empty. I stripped down to my shorts, pulled on the long zoot suit jacket  [from his show] and slunk out into the chairs in front of the stage. Peggy DeCastro about melted into the stage.”
— Freddy Powers 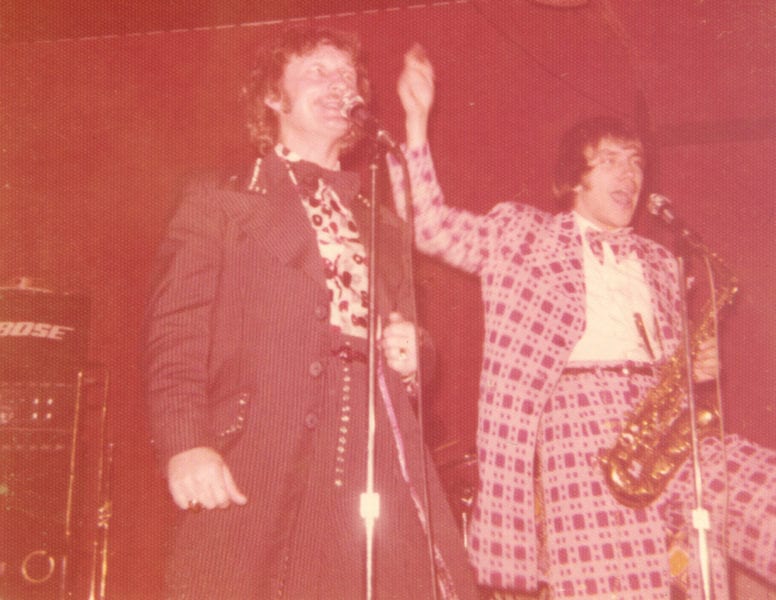 Freddy’s relationship with Merle Haggard was a long and fruitful one. They hit it off so well that they ended up living as neighbors in houseboats on Shasta Lake. During that time they started writing songs together, among them the huge hit, “I Always Get Lucky With You.” With that and several other songs they wrote together being successful, Freddy ended up touring with Merle for six years.

Local musician Rick Metz played with Freddy back in the ‘90s. Metz had moved to Reno in 1991 and joined The Zella Lehr Show. It was Zella who introduced him to Freddy. He jammed frequently with Freddy throughout the ‘90s while Powers was playing at John Ascuaga’s Nugget.

“Freddy was the consummate performer. He always had a stellar band, was personable, hospitable, and had a beautiful voice. When Freddy sang he captured the room. He had a big, rich voice. He wasn’t so much doing the comedy when I met him. He would tell a joke now and then, but he let his music do the talking.” — Rick Metz

The memoir by Catherine and Jake Brown, “The Spree of ’83: The Life and Times of Freddy Powers,” will be available as of May 15 on Amazon.com. It’s available for pre-order now.

I’ve read portions of it and believe that it will be a good read for anybody interested in Freddy, country music, songwriters, Reno or Nevada entertainment history, or even those who just need a good laugh.