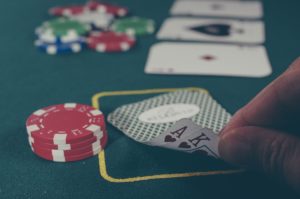 Housing, hiring and high tech have led Reno’s parade of booming-economy headlines in 2018.

Nearly lost in the din: casino gaming. While more cutting-edge businesses and a growing roster of entrepreneurs get the attention, the Reno-Sparks area’s casinos are quietly racking up a solid year of their own.

From January through October, gross gaming revenues – the gaming “win” in industry lingo – rose 4.6 percent over the same period in 2017, according to Nevada Gaming Control Board data.

While modest, that’s almost twice the 2.5 percent rate of the state as a whole, the total of which includes greater Las Vegas, where four out of every five dollars of statewide gross gaming revenues are generated.

“It’s nice to see. For so long, it was bad news,” said Mark Nichols, an economics professor at the University of Nevada, Reno. “It’s come a long way from recession.”

Indeed, few business sectors averted the wrath of the Great Recession. Nevada’s casinos certainly felt it, especially at a time when they were already scrambling against the rise of tribal gaming in California, home to much of the Silver State’s gambling base.

Economists say gaming revenues are tied in part to discretionary spending, which is dependent on consumer confidence, which tumbled during the recession but has since rebounded as Reno regained its economic footing with a deep-cleated vengeance.

Much of the resurgence is due to new incoming business, led in large part by electric car maker Tesla Motors’ mammoth battery-manufacturing plant east of Sparks.

But people are visiting Reno-Sparks and Lake Tahoe in greater numbers, figures show, and they are willing to spend more on lodging.

The January-October average hotel room rate of $116.47 is a 9.1 percent rise from a year earlier, and hotel room tax revenues have risen 6.4 percent, according to the Reno-Sparks Convention and Visitors Authority.

He also cited 12 consecutive quarters of increased visitation in Washoe County before a dip in the most recent July-September period.

He noted that monthly gross gaming revenues in September and October slipped from the same months a year earlier, which he blamed in part to their comparisons with big months in 2017.

But he characterized that as a “little bump in the road” as there were 16 straight months of year-over-year increases leading up to September.

Assessing the big picture in Washoe, Lawton said, “They’re on a tear.”