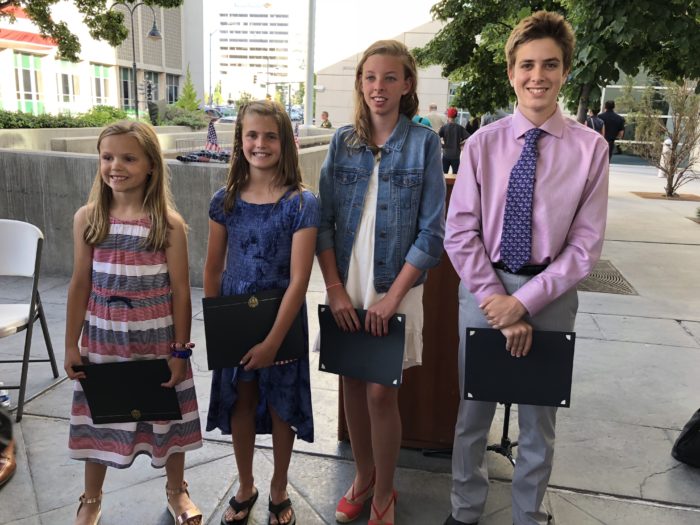 The Second Judicial Court marked Flag Day on Thursday outside the courthouse in downtown Reno with a live band, guest speakers, and a student poetry contest while remembering a late chief judge who resurrected the annual event locally.

Flag Day had been a staple at the courthouse but it took a several year hiatus before then-Chief Judge Patrick Flanagan last year insisted it be brought back. Flanagan, who was elected to the bench in 2006 and re-elected in 2014, passed away in October 2017.

Chief Judge Scott Freeman said Flanagan will always be remembered for his commitment to the court, community and future generations. 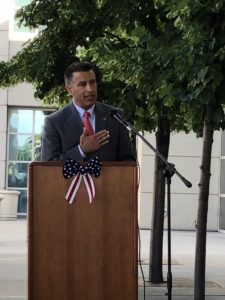 Gov. Brian Sandoval, a former federal judge, said one of his favorite things about that job was presiding over citizenship ceremonies.

“We would have a group of between 50 and 100 new Americans, one or two of which in every ceremony would share their story,” Sandoval said. “They would share their story of where they came from and their journey to the United States and the sacrifices they had made in the separation from their friends and family to come here. They would stare at that flag and understand what it meant to be a U.S. citizen and to have the freedoms we enjoy here.”

Under the direction of Al Pefley, the Mayan Concert Band performed patriotic songs. The Nevada Veterans Coalition presented the colors, the city of Reno’s newly-designed flag was given to the court, ice cream and apple pie were served, worn flags were collected and the student poetry contest winners were announced.

The court received 70 poems from students at five schools, which asked children to explain what living in the U.S. means to them. First place winner was Giana Brunetti, a fifth grader from Our Lady of the Snows Catholic School (see text of poem below). Second and third place winners were eighth grader Luka Berg and seventh grader Keira Brady, both Snows students. The most artistic award went to Huffaker Elementary School second grader Josie Williamson.

Assistant court clerk Julie Wise said the court tried its best to get the word out about the contest but most entries came from Snows. According to Flanagan’s obituary, he was a parishioner at Our Lady of the Snows Catholic Church.

Held each year on June 14, Flag Day marks the anniversary of the official adoption of the flag’s design. Continental Congress approved the design in 1777 and informal celebrations began about a century later.

A resolution signed by President Woodrow Wilson officially established Flag Day in 1916. It was designated by an act of Congress in 1949 under President Harry Truman, with such legislation calling upon the president to issue a Flag Day proclamation each year.

Here’s a text of Brunetti’s poem, which will be featured in the Washoe County Bar Association’s monthly newsletter, “The Writ”:

The United States is the home for me,
In a land of love and liberty,
One nation filled with dignity,
Surrounded by friends and family.

When America started the Revolution,
Every state made an attribution,
So the founders could make a constitution,
That even today is a great solution.

When I’m in America, I feel safe and free,
I have religious freedom and can do what I believe.
I know this is how our founders wanted America to be,
Which is why our brave army lay down their lives for you and me.

America was strong throughout the battles we went through,
And when a government was created, a beautiful nation grew.
When I see America’s symbol, a flag of red, white and blue,
I am sure I am proud to be an American in everything I do. 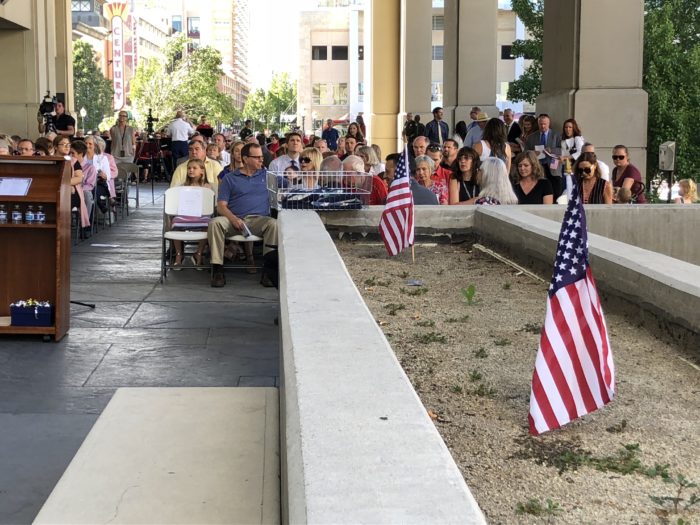