Home > Featured > From The Right: Checking in With Balaam for Sheriff (Opinion)
Featured

From The Right: Checking in With Balaam for Sheriff (Opinion) 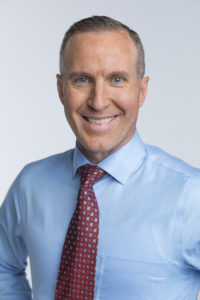 In April I spoke with Darin Balaam, candidate for Washoe County Sheriff. Balaam is a 20-year veteran of the Washoe County Sheriffs’ Office (WCSO) and one of seven in the race to replace outgoing Sheriff Chuck Allen. In my conversation, I have to admit I was rather impressed with Balaam’s openness and deep base of knowledge on many issues.

Balaam is a fifth-generation Nevadan born in Carson City and raised in Sparks. He’s graduate of University of Nevada, Reno and Southern Police Institute, and earned a Master of Science from University of Louisville. The husband and father of four met his wife at the Sheriff’s Office. And in case you’re not familiar with the name, he’s also the son of former Washoe County Sheriff Dennis Balaam.

Balaam began his career in law enforcement as a graveyard property clerk at the jail as he worked his way through college and the academy during the day. He presently teaches at Truckee Meadows Community College and Western Nevada College.

Addressing the elephant in the room about his father’s ties and his frontrunner position in the race, Balaam says, “I’m not a ‘good old boy’…I serve everybody. Some people may come out on me and say that my dad gave me everything. I would tell you he didn’t give me anything. What he did give me was great leadership and mentorship.”

Balaam keenly understood throughout his career that he had to work twice as hard as everyone else to overcome perceptions of bias. But he sees himself as his own person in regards to views, attitudes, experience, and approaches to law enforcement.

As Assistant Sheriff in 2014 Balaam worked in the front office when newly elected Sheriff Allen requested he step down to a rank of Deputy Sheriff; his position was an at-will position and within the purview of the Sheriff to appoint or dismiss in the department. This event prompted his retirement and consideration to run for Sheriff sooner than he planned. “I made the difficult choice to retire and I knew at that time what I wanted to do in four years was run for Sheriff,” Balaam said. “I met with Sheriff Allen two and half years ago and told him. You know if he kept me I would have supported him, and when he was done all my request would have been was: support me if I showed you I could have done a good job, because I want to run.” 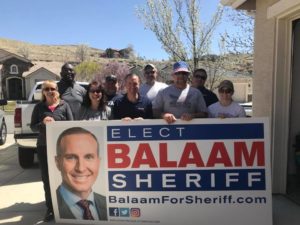 On January 5, 2015 Balaam resigned his position from the WCSO. He has been on the campaign trail ever since, meeting voters, knocking on doors, and reflecting deeply on what changes he can make to improve the Sheriff’s Office.

“For three years, I’ve been out actively meeting with business leaders, city officials, and the community to really educate myself on what are the issues.” He intends to out-work everyone in the race by walking door-to-door and speaking from the heart – no scripting. He says it’s his hope that his passion shows and people see that he isn’t a politician.

Despite this being his first run for office, Balaam has a very commanding position having out-fundraised his opponents. According to first quarter finance reports he’s raised $125,000, mainly from small donors, while his nearest competitor has brought in just $39,000. He has also garnered wide-ranging support from members of both political parties of Washoe County leaders, Reno and Sparks public officials, business and community leaders, and the general public.

If elected, Balaam’s first actions will be to review the internal and external needs of the WCSO and the community. He notes that his time away from the department has given him a unique perspective to better understand and resolve potential and current challenges the department is facing including low morale, higher turnover, and budgetary issues. He also intends to partner with the community to find solutions to reduce law enforcement interactions with people suffering from mental health issues and better connect them with resources to support improved overall health. “How do we get out of our silos, and how do we help show the way, and focus resources?” Balaam asks.

On crime-fighting, Balaam’s perspective is that of the serious crimes committed, 80 percent of the major crimes, such as theft, vandalism, drug trafficking, and assaults, are committed by just 20 percent of the criminals, who are habitual. ) To better tackle that issue Balaam ascribes to the practice of smart policing and using better data and analysis to track and stop crimes before they happen.

Balaam intends to be open and accessible if elected, even if mistakes happen. He pledges to own up to it up front, and get right to work on solutions. He also appealed to the community he wishes to serve in this campaign for support: “I need your help, I need investors to get the message out because it’s not cheap to get flyers and mailers out, advisors to let me know what’s going on, the honest truth in the community, and I need evangelists to tell you to get out and vote, and to vote for me.”

To find more about Balaam’s campaign for sheriff check out: https://www.balaamforsheriff.com/