Two members of the Sparks City Council spoke during Thursday’s Reno-Sparks Convention and Visitors Authority (RSCVA) meeting about plans to have oversized letters identifying the city installed at two landmarks to better promote the Sparks identity.

“‘It’s happening here’ is more than a slogan to us,” Councilman Ron Smith said. “The truth is that Sparks has an identity problem.”

Sparks is often thought of as a suburb of Reno and when nationally-televised water sports events take place at Sparks Marina Park, TV cameras show shots of the Reno Arch, Smith said. Also, many think the Best in the West Nugget Rib Cook-Off held annually in Victorian Square is actually in Reno.

The city’s Tourism and Marketing Committee initially requested $45,000 from the RSCVA to put up signs that collectively cost $90,000 at Sparks Marina, 300 Howard Drive, and Golden Eagle Regional Park, 6400 Vista Blvd. Smith, who chairs the committee, and Councilman Ed Lawson, vice chairman of the RSCVA board, then asked the board for the entire $90,000.

They also noted that Reno recently got almost $90,000 from the RSCVA to repair its iconic Arch downtown on North Virginia Street.

RSCVA attorney Ben Kennedy told the board it couldn’t vote on the entire $90,000 because the item on the agenda was for $45,000. Smith and Lawson then said they’d bring the item back to the RSCVA board at a future meeting. 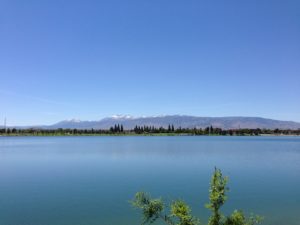 Boating events scheduled this year at Sparks Marina include U.S. Open of Watercross and the International Dragon Boat Festival, and the council members said the city needs some good ways to brand itself.

“Televised events will automatically zoom in on these letters, identifying Sparks as the location of these events,” Smith wrote in a proposal to the board.

Additionally, Lawson said Golden Eagle Park generates about 15,000 room nights per year and is a regional benefit because many people who play at the park stay in Reno.

“In the long run, we’re asking Sparks get on the map,” Lawson said.