Critical Mass: Do You Trust The School Board?By Michelle Beck 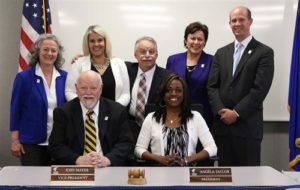 Over the course of this series we have discussed the various laws applicable to our overcrowding issues, our single funding source and even touched on the issue of how the perception of the school board has affected the discussions surrounding overcrowding.

What we haven’t really talked about is the board itself.

Officially the “Washoe County School Board of Trustees” consists of seven elected officials, chosen by their districts in a general election. At the time of what I like to call “The Pedro Incident” the board consisted of Barbara Clark, Barbara McLaury, Estela Gutierrez and John Mayer who had been serving on the board since 2011 and before. Lisa Ruggerio, David Aiazzi, and Howard Rosenberg had joined the board in 2012.

In the immediate backlash of “The Pedro Incident” both Clark and Gutierrez were swiftly replaced with newcomers (CLARIFICATION:  Gutierrez chose not to run for re-election), Veronica Frenkel and Nick Smith. Smith resigned earlier this year amidst the controversy of his involvement with a high school student. Shortly after, Smith was also fired from Sizzler, according to the parent company Sizzling Platter, because they had “zero tolerance…regarding harassment…inappropriate behavior…vulgar language”. Between 2014 and now, both Aiazzi and McLaury resigned and this November, Ruggerio and Rosenberg are exiting stage right. Only Mayer remains.

Four trustee seats are being filled this November with only one incumbent running.

Why is this important? A new broom sweeps clean as they say and the candidates running for those seats are members of your community. Concern over the board’s “responsibility” is also in our own hands come November. When discussing our funding issue and “trust” is addressed, it all comes down to who DO you trust? How closely are you looking at the candidates? What do you know about them?

How much do “they” know about their roles and about their limitations? Even though the board in 2017 will not be doling out the money if WC1 passes, they will be the board figuring out what happens next if it doesn’t.