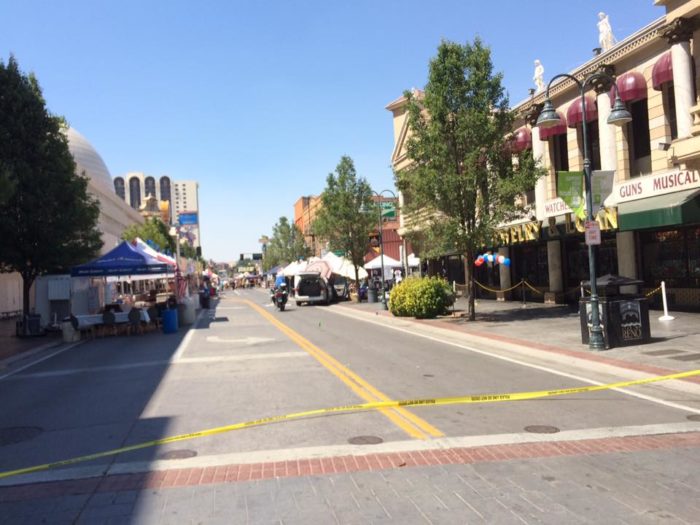 A vehicle charged through a barrier yesterday at downtown’s chicken wing festival leading to an Reno Police Department (RPD) officer shooting the driver of the vehicle.

“Tragedy was averted … in downtown Reno earlier as no citizens or officers were injured when Reno Officers stopped a motorist who tried to drive his vehicle into the crowded Chicken Wing Festival,” according to RPD.

The incident began at approximately 1:30 p.m. on Sunday, July 3, 2016 when a Reno Police Department Motor Unit attempted to make a traffic stop on a silver minivan in the area on Kuenzli Street and E. 2nd Street. The minivan failed to yield, proceeding west toward downtown Reno.

The minivan then approached Virginia Street from East Plaza Street. At the time, Virginia Street was closed to vehicle traffic and crowded with pedestrians attending the Biggest Little City Wingfest.

As the minivan approached Virginia Street from East Plaza, a Reno Police Officer, who was on foot in the area, fired on the vehicle. The minivan turned on to the 300 block of North Virginia Street where it came to a stop.

The driver of the minivan was transported to a local hospital where he was declared deceased. (The) cause of death is still under investigation.

No civilians or officers were injured during the incident.