By Carla O'Day Published: July 6, 2016Last Updated on July 7, 2016
A blighted property was removed by the city to make way for a Burning Man sculpture park. Image: Carla O'Day 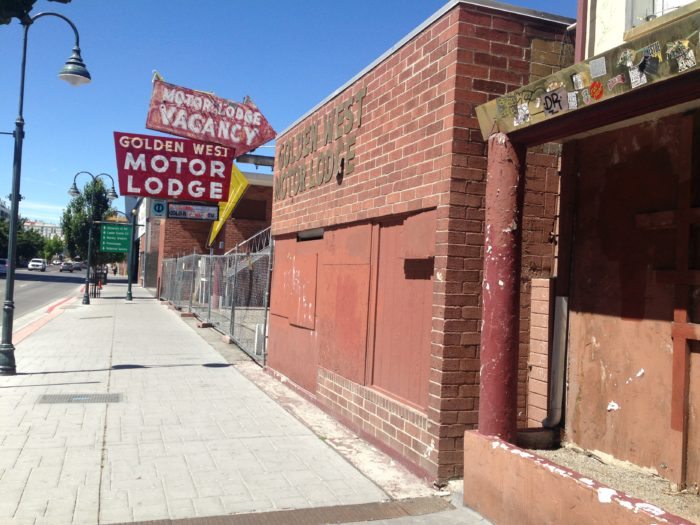 By Carla O’Day and Bob Conrad

Two closed downtown motels, considered to be nuisances by local officials and some downtown advocates, will be demolished later this summer, the Reno City Council decided during a special meeting Wednesday.

Heart O’Town was built in 1960 and sits on 13,750 square feet. Golden West contains two structures built in 1955 and 1958, each which sits on its own 7,000 square-foot lot. Northern Nevada Urban Development & Management Company LLC bought the property in 2013, along with several adjacent parcels.

Council members were initially scheduled to vote on the matter June 21 but postponed a vote to allow local developer, HabeRae Properties, to try and negotiate a deal with landowners to purchase the site. HabeRae partner Kelly Rae told Council members then that she’d transform the dilapidated buildings into either affordable housing or a boutique motel.

However, HabeRae’s $1.2 million cash offer for the three parcels the motels occupy was denied by the several dozen property owners. HabeRae then offered $2.4 million for those parcels and surrounding parcels and that too was denied. No counter offered was made, she said.

“When asked point blank what they’d be willing to sell the property for, we received no response,” Rae said.

Nobody spoke on behalf of Northern Nevada Urban Development & Management Co. At the previous council meeting a company representative said the company was in favor of demolition.

The matter drew passionate response from the public, many who said the city shouldn’t foot the bill for demolition and that the working poor need places to live. Demolishing the motels would eliminate the opportunity for them to be refurbished, they said.

Julie Rice, a waitress, said she used to live in Midtown but moved to an apartment on Neil Road when it got too expensive. Those with incomes below the poverty line are underrepresented and need to be heard, she said.

“I voted for you and I voted for you,” Rice said, pointing toward Mayor Hillary Schieve and Councilman Oscar Delgado. “You represent all of us. Not just the people in suits.”

Tray Abney, director of governmental relations for Reno-Sparks-Northern Nevada Chamber of Commerce, said the Chamber supports demolition and that the city can’t force property owners to sell, develop or do anything else.

“Leaving those motels there won’t increase affordable housing,” Abney said. “This is not about making the rich richer.”

Ken Krater, chairman of Operation Downtown, said the organization’s top priority has been affordable housing but he still supports demolishing the motels.

“There’s got to be more to Reno than buildings that don’t meet our code requirements,” he said.

The agreement states the property owners will allow the city to pay for demolition and then pay back the city or else a special assessment lien would be put against the property.

Schieve said that the money used for demolition will be recouped by the city, or the city can take ownership of the downtown properties.

“This is not a subsidy for developers,” she said. “They have to pay us back.”

Delgado chalked this up to “slumlords” who haven’t been taking care of their property. The city reached out to work with them and received no reply, he said.

“If you’re a property owner that doesn’t take care of your property, knowing that you’re sitting on it for profit gains, and it’s hurting and devaluing people around you, you’re a slumlord in my eyes,” Delgado said. “This kind of dug us into a corner.”

City code enforcement manager Alex Woodley gave an example how taxpayer-funded calls for service related to boarded up motels changed when a property was demolished.

Woodley said once the Zanzibar Motel and Lodge in the 2900 block of South Virginia Street closed and got boarded up, it generated between five and 10 calls per month to either code enforcement or police. There were also three deaths, he said.

When Zanzibar was demolished in 2009, he said there were zero calls related to the vacant land. During a previous meeting, Woodley said there have been instances of people finding their way into Heart O’Town and Golden West.

“The fear is those buildings could stay there and cause more harm,” she said. “It becomes a very sticky situation.”