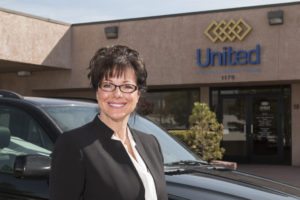 Carol Nicholson wasn’t in the market for a new car when she first started working with United Federal Credit Union, but an accident involving another vehicle left her in need of expert help.

“After going through the accident I was pretty overwhelmed with all the other details, so UFCU came to me and was like a blessing to get me back driving in a safe vehicle of my choice,” Nicholson said. “I found that United Federal Credit Union assisted me in making this whole transition so much more pleasant. I was able to come down, meet the team, review all of my banking information, and I was able to be approved and processed so efficiently.”

Nicholson has been so satisfied with the dedication of United’s team, and the personal attention that comes with being a UFCU Member, that she is looking to continue her relationship with United Federal Credit Union even after the auto loan is paid in full.

“I was so excited with the treatment and the financing I received, that now I’m looking at refinancing my home and other properties that I have through United Federal Credit Union.”

UFCU’s Nevada Market Vice President Danny DeLaRosa says new Members like Carol, who are used to working with big banks, are often surprised by how committed United Federal Credit Union is to serving its Members.

“We like to build a relationship with our Members,” said DeLaRosa. “We know a lot of things have happened in this local economy, and it was a very difficult time for some people. At United Federal Credit Union, we don’t look at only one instance in someone’s life, but rather who they are across the board. We look at their past, where they are currently, and their goals for the future, and UFCU is dedicated to helping them attain those goals.”

United Federal Credit Union has six branches in the Reno-Sparks community and recently opened a branch on East William Street in Carson City. A second branch in Carson City is scheduled to open later in 2016.