By ThisIsReno May 19, 2016
Allan Sisia, owner of Providence Electric.

Allan Sisia, owner of Providence Electric, never expected to leave a large national bank he had done business with for two decades in favor of a credit union, but when the Great Recession began to impact the Reno-Sparks area, he discovered his prior loyalty to the bank didn’t amount for much in return. 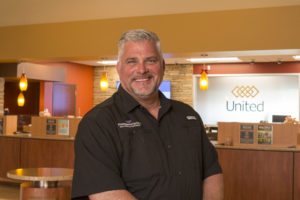 It was then Sisia realized he needed to switch financial institutions, and called on his friend Danny DeLaRosa, Market Vice President of United Federal Credit Union, for assistance.

“At the end of 2014, we knew we had a large project coming up, so Danny met with me along with his business manager to review the financial needs of my company. A short period later, we landed another large project,” Sisia said. “Because United Federal Credit Union stuck with me we were able to pull off the entire 2015 year with no financial worries. They gave me the line of credit that we needed, and Providence Electric has been able to succeed.”

DeLaRosa says Sisia’s story is one UFCU is familiar with, and believes United’s commitment to understanding its Members’ financial goals is what sets the credit union apart from others in the Northern Nevada market.

“We like to build a relationship with our Members,” said DeLaRosa. “We know a lot of things have happened in this local economy, and it was a very difficult time for some people. At United Federal Credit Union, we don’t want to look at once instance in someone’s life, but rather who they are across the board. We want to look at their past, where they are currently, and their goals for the future, and UFCU is dedicated to helping them attain those goals.”

United Federal Credit Union has six branches in the Reno-Sparks community and recently opened its doors on a branch on East William Street in Carson City. A second branch in Carson City is scheduled to open later in 2016.

UFCU helps local woman get back on the road after...