By Bob Conrad May 31, 2016
Horses at the Seaman Herd Area Game Cam at seep 2 in 2013. Image from the BLM Nevada's Facebook page: https://www.facebook.com/BLMNevada 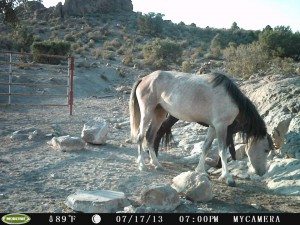 Horses at the Seaman Herd Area Game Cam at seep 2 in 2013. Image from the BLM Nevada’s Facebook page: https://www.facebook.com/BLMNevada

Sandoval is negotiating to alleviate pending concerns in regards to sage grouse litigation. He also sent a letter (read it here) to BLM Nevada Director John Ruhs regarding wild horse overpopulation, which he said is affecting rangeland health and the health of horses.

“I’m very concerned about the over-population of wild horses in Nevada, the negative impact they have on our rangeland, and the burden of the proposed solution being solely put upon the livestock industry,” Sandoval wrote May 18, 2016. “Livestock grazing is carefully managed by designating limited seasons of use, allowable use levels, pasture rotations, and stocking rates. Livestock grazing is carefully monitored to achieve and maintain healthy rangeland.

“Wild horse herds are uncontrolled and increase at a rate of about 15 to 20 percent each year with no management plan besides the occasional, high cost round-ups which are not a permanent solution to the problem.”

The construction of a new Baker Water Tank and the associated right-of-way have been successfully negotiated by the Governor’s office and the Bureau of Land Management. Due to the imminent health and safety surrounding the need to complete installation this year, the Governor prioritized this issue throughout his discussions with Secretary of the Department of Interior, Sally Jewell. The project, which will include construction of the new tank and demolition of the existing tank, is scheduled to begin on June 1 and be completed within the year.

The habitat category maps prepared by Dr. Peter Coates from USGS have been formally peer-reviewed and adopted by the Nevada Sagebrush Ecosystem Council. The BLM is now using those maps to make on-the-ground decisions. The Governor’s staff is working with the Bureau of Land Management on implementation of the proposed state maps.

Acknowledgement and Adoption of the Conservation Credit System

Nevada’s Conservation Credit System (CCS) was created and adopted by the Nevada Sagebrush Ecosystem Council. The purpose of the CCS is to provide a system for mitigating the impacts of land-disturbing activities while assuring a net conservation gain for the greater sage-grouse. This system provides a way for mining and energy companies to continue their projects on public lands. During many discussions between Governor Sandoval and Secretary Jewell, the Governor urged the Secretary and consequently the BLM to support the CCS as a valuable tool to mitigate unavoidable impacts. In late April, a Memorandum of Understanding was signed between the BLM and DCNR defining the process for implementing the CCS in Nevada. The endorsement from the BLM strengthens the Nevada State Plan.

The Department of the Interior and subsequently the Bureau of Land Management have released two areas previously identified as sage grouse habitat in Washoe County. These areas were originally designated by the County as sites for a potential cemetery and school.

Negotiations are active and ongoing regarding the Governor’s proposed alternative boundary for the mineral withdrawal analysis. The Governor’s proposal would protect more habitat and leks as well as protect our mining and exploration business.