By Erin Meyering February 6, 2016
Water efficiency will be the focus of TMWA's contributions to the City Energy Project.

Bently Minden Farmers Bank, in downtown Minden, received Project of the Year.
The Farmer’s Bank Building was recently transformed from a small 20th-century town’s financial center into an environmentally sustainable LEED Platinum Certified 21st-century workplace guided Chris Bently of Bently Ranch. Repurposing sections of the building and converting it into a functioning space, with public access, just built upon the strategy for an environmental building. 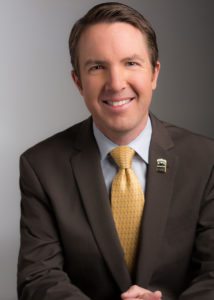 Caesars Entertainment Corporation (and Harrah’s) won in the Organizational Excellence category. The company strives to be environmentally friendly and from 2007 to 2014, reduced greenhouse their gas emissions by 22.6 percent; reduced energy use by 21.3 percent; reduced water consumption 16.6 percent; diverted 44.3 percent of materials from landfills; engaged 49% of employees in the CodeGreen program; engaged 52% of suppliers in reporting greenhouse gas emissions; and achieved LEED certification on new construction and expanded properties.

Marisa Kendall-Cooper, Science Coordinator, Adolescent Science Guide, STEAM Fair Director and Science Curriculum Writer for High Desert Montessori School, won the award for the Education category. Kendall-Cooper works to effectively teach young people about science; understanding the world around them, and she was one of the original teachers retained by the Desert Research Institute GreenPower program to develop curriculum for the Green Box program.