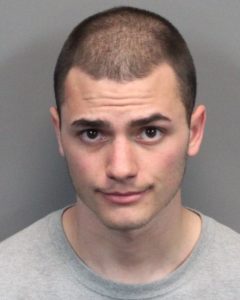 At about 1:30 a.m. this morning, Reno Police Department (RPD) officers responded to a report of an armed robbery at an AM/PM on South Virginia Street.

The suspect displayed a black handgun and demanded money, according to police. “After receiving an undisclosed amount of money the suspect was last seen leaving the area northbound Holcomb on foot.

“While checking the area for the suspect, officers attempted to stop a subject matching the description as he exited the 7-11 located at 800 South Wells Ave.”

The subject ran from officers and was caught after a foot chase. A discarded handgun was also recovered, police said.

“It was learned the suspect had just committed another armed robbery of the 7-11 that had not yet been reported. The suspect was found to be in possession of property taken during the two robberies,” RPD said in a media statement.

Miller, Austin 7/11/95, charged with two counts of armed robbery and one count of obstructing an officer.