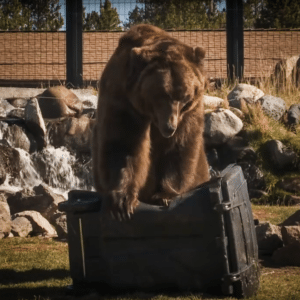 Before a new agreement is signed, however, county commissioners would like to see some key issues addressed.

One issue is single stream recycling. Residents of unincorporated Washoe County are the last among residents in the county, including the cities of Reno and Sparks, who are not part of the  single-stream recycling service.

Those residents still use the green and yellow recycle baskets, but the recyclables are being collected into a single truck and are not being segregated by type of recyclable, a past practice by Waste Management.

Because Waste Management is already putting all recyclables into one truck in these areas, moving to a single-stream recycling service would mean, for residents, a change in the bins, which some residents are opposed to using because it would also mean an increased cost to them.

Waste Management countered that there’s an increase in convenience to residents.

“We collect in single stream,” said Waste Management’s Area Manager Greg Martinelli. He said that residents “want to recycle, but they don’t want to use the (green and yellow) baskets. Wheeling a can back and forth (to the curb) is going to be easier for them. So it’s the ease of operating the system is really what they’re doing.”

Moreover, Martinelli said that it would have to buy new trucks to accommodate the new single-stream recycling bins, bins that can be rolled to the curb, and this would also allow Waste Management to move from a two- to one-man trucks. Waste Management’s Sarah Polito added today that, “no jobs will be lost. For more than 12-years, our recycling routes have been manned by one person.”

Adoption rates of recycling would increase from 18 percent to an anticipated 80 percent, based on Reno’s increase in recycling after going to single stream, according to Martinelli. Another Waste Management representative said in February that the increase in Reno went from 35 to 80 percent.

Polito added today that “prior to the implementation of single-stream recycling … we saw a participation rate of approximately 32 percent. Since the program was implemented in the City of Reno, we have seen participation grow to 75 percent.”

“(Residents) want to recycle, but they don’t want to use the baskets because they are a hassle,” Martinelli added. “A lot of the properties in Washoe County are larger properties so you’d have to carry two baskets down to the curb which might not be 60 feet — it might be 100 feet, so wheeling the (single stream recycling) can back and forth is going to be easier for them. So it’s the ease of operating the system.

“Government’s motive here is to try to get more people to recycle,” Martinelli explained. “We really encourage people to at least try it, and a lot of people that try it find out they really like it.”

Washoe County Commissioner Jeanne Herman said that residents in her district are opposed to moving to single stream recycling.

“We’re trying to keep things the way they are, if possible,” she said. “Basically what they’d like to do in district five is keep it the way it is.”

Moving to a new system with Waste Management would increase costs to most unincorporated county residents by (edit: $1.72) a month, Martinelli said. Additional bins would cost an additional $7.37 per month for each 96-gallon waste cart, according to Waste Management documents, which is a concern for those with horse properties who have to dispose of manure in multiple bins of various types.

And mandated Waste Management bins are another a point of contention.

“(Residents) don’t want to have a Waste Management-designated cart,” said Assistant County Manager Kevin Schiller. “So in the current process, you can have … your own receptacle.”

“Part of the model of this is increasing efficiency by containterizing everything,” he said.

The cost of the containers and cost of Waste Management’s trucks will go up, Martinelli added. “The equipment’s more expensive. It’s going to cost more to process it because we’re building a recycling center downtown.”

If the county goes with Waste Management’s single stream recycling precedent for Sparks and Reno, residents would gain 20 excess-waste stickers and four free drop-offs of waste to area landfills or transfer stations, an effort that is hoped to reduce illegal dumping. According to Polito, customers will be allowed to place an additional six bags, boxes or bundles without using a sticker during two four-week periods in the spring and fall.

The county would also like to create a grant program, potentially funded by Waste Management franchise fees, to help curtail illegal dumping, in which organizations such as Keep Truckee Meadows Beautiful would be eligible to apply for grants.

Another concern is bears. Parts of unincorporated Washoe County, particularly Galena and other wildland-urban-interface areas, have concerns with bears and garbage.

Critics of Waste Management accuse the company of not dealing with bears and garbage properly by not offering bear-proof containers.

Waste Management, however, said that it is open to solving the problem of bears getting into garbage with options for bear-resistant garbage bins (watch the video).

But there’s a cost involved. Bear bins are not cheap, averaging, according to Schiller, about $230 each.

Waste Management’s Martinelli put the ball back into the county’s court.

“(Addressing bear concerns) is certainly something we can do,” he said. “I just need a little bit of help from you guys as to how you want to see it. Do you want to see it on a subscription basis, where we would provide pricing to the individual customer? If he wants it, we can provide it.

“We can do anything you would like us to do. We just need to know how to go about doing it,” he added.

Increasing the county franchise fee by 1 percent could bring in an additional $100,000 to the county, which could pay for bear bins, an option discussed at last week’s county commission meeting. The county’s franchise fee is 5 percent, as opposed to the 8 percent that Reno and Sparks receive.

“You all have decided that you’re going to handle your solid waste through a franchise agreement,” Martinelli said. “Which means that you negotiate with me on behalf of your constituents, not the other way around.”

Reno is proposing an outside legal review of its franchise agreement with Waste Management, due to a lawsuit and a number of criticisms levied at the disposal company.

Reno city councilmembers have also said that they want more independent oversight of the company’s practices.